“If the rich could hire others to die for them, we, the poor, would all make a nice living”

Art cinema or parallel cinema in India has always been an important cultural aspect, catering to the niche rather than the mass-market audience. Random House Kernerman Webster’s College Dictionary defines art films as “films made primarily for aesthetic reasons rather than commercial profit”, and containing “unconventional or highly symbolic content.” Scholars of film studies define art cinema as one characterized by a sense of social realism, with an emphasis more on the characters’ thoughts, perceptions and development of ideas rather than following a set standard of storytelling. Art cinema often depicts the lives of the less-privileged and their everyday struggles to make both ends meet.


Italian Neo-realism, one of the most foundational moments in the history of cinema, especially captured poverty, meager livelihood, and the pain of those living on the periphery. Films such as It’s a Wonderful Life (1946) and Bicycle Thieves (1948) showcase these everyday challenges in the most realistic way that can ever be. Who can forget the hopelessness and despair-laden face of Antonio Ricci when his bicycle, which is imperative for him to continue his job of posting advertising bills, is stolen? That bicycle was his only hope of earning and providing for his family, and the whole of the film showcases his struggle to recover it. 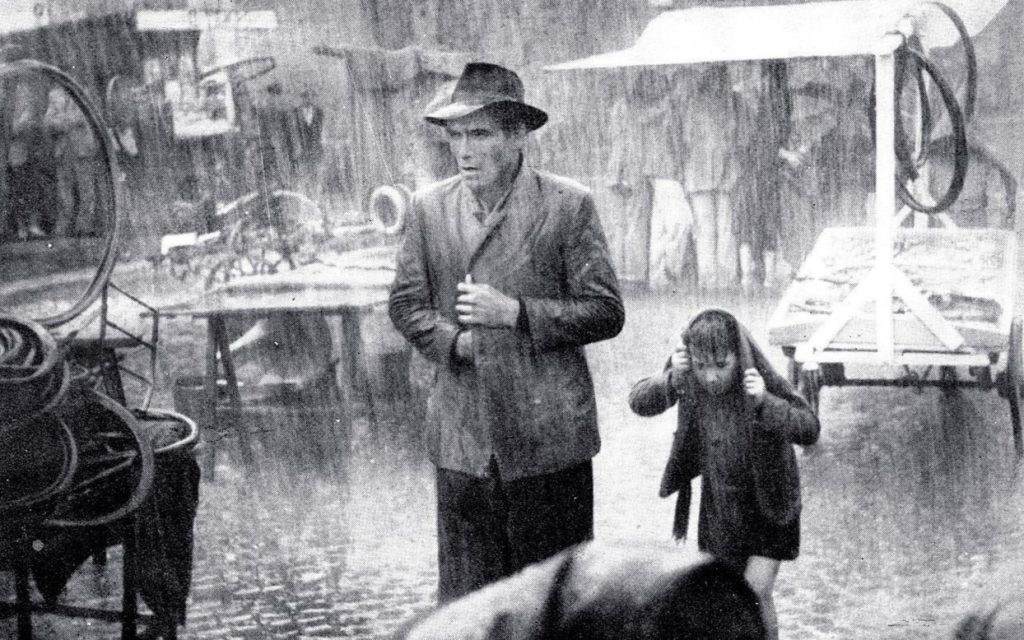 Inspired by movements like the French New Wave and Neo-Realism, Indian auteurs, such as Satyajit Ray and Ritwik Ghatak, also made films depicting the everyday life struggles of people, which have been highly acclaimed both at home and overseas. However, one point of contention is that, although these films are about the poverty-ridden, they are not for them. A person or a family which tries hard for one meal, knowing not whether or from where the other would come, cannot afford to go and spend money on films and see their own lives depicted before their eyes. People of all classes and ages can watch and relate to certain films, but for the underprivileged.

Related to Cinema and the Art: Why do We Love Movies?

Cinema in general, and cinema capturing poverty and other ills of the society, in particular, is meant for the elite. Directors, although having a social vision, make films meant for a select few, the “crème de la crème” of society. Meant for a limited, multiplex audience, one often sees groups of intellectuals, both old and young having discussions about how realistically beautiful a particular film was and how it made them think. But think what? Just how poverty-ridden their country is? Does that actually make a difference?


Long-standing debates about hierarchical issues in art, or even the legitimacy of the terms ‘high’ and ‘low’ art, which are central to academia, are not the considerations here. Rather, it’s a philosophical and psychological plunge into the role of art and aesthetics itself. If one delves a little more deeply, one would realize that the depiction of the problems of one section of society on the big screen is a source of aesthetic pleasure for the other. Satyajit Ray, India’s only Oscar-winning filmmaker was a pedlar of poverty and his early work was based in famished Indian villages, as were Ritwik Ghatak’s gut-wrenching portrayals of the horrors of post-partition India in the shantytowns of Calcutta.


Even films falling under the rubric of the ‘popular’ have poverty as their major theme. The divide between the rich and the poor began with films such as Do Bigha Zameen (1953) and Mother India (1957). More recently, in popular culture, “depictions of poverty in film” essentially means Slumdog Millionaire (2008). Although not by an Indian director, the film is an important part of India –  the Indian underbelly, the slum-dwellers, who are depicted as disgusting (Jamal swims through human waste and picks through garbage), violent (Jamal’s mother is slaughtered by raiding Hindus and Jamal himself is almost maimed by a crime boss), and prone to crime. Through films such as these, it seems that Indians have come to terms with Western filmmakers’ depiction of the country’s crushing poverty. In fact, most such films are a favorite with the Academy Awards, receiving maximum nominations and awards. 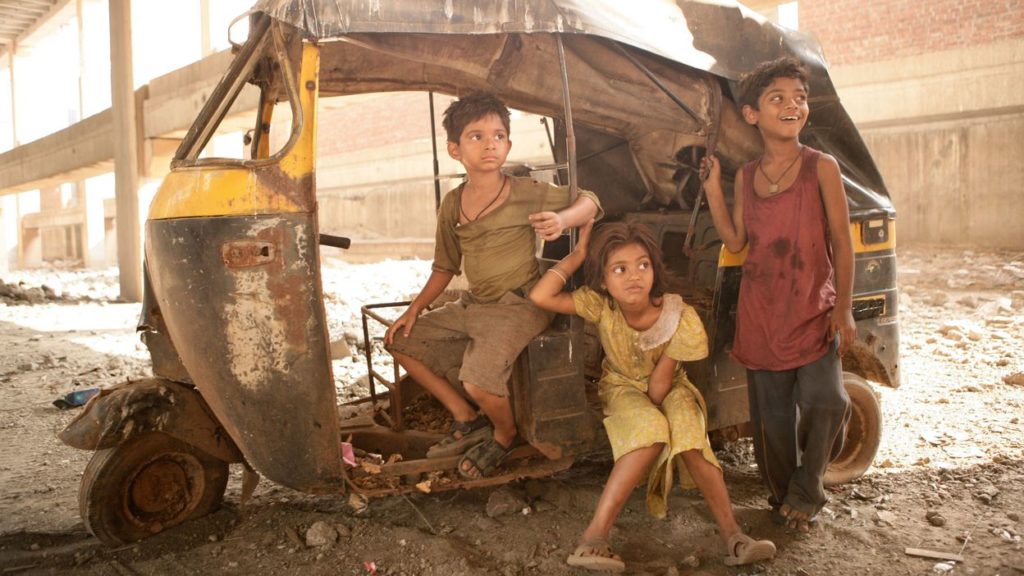 In Pather Panchali (1955), Satyajit Ray’s masterpiece, the extremely dire conditions in which Apu’s family tries to survive, and the way his sister dies after contracting pneumonia, stir up the most latent of emotions. Despite the anguish and helplessness that run as subtexts throughout this film, there are scenes where Apu and his sister Durga indulge in simple childhood pleasures, such as watching a train for the first time. One of the reviewers of this film wrote, “…there is something poetic about ‘Pather Panchali’, not so much for its portrayal of life in its crudest form but for rekindling the appreciation for those little things in life that we had forgotten years back”. This led me to think about how poverty and struggle are romanticized by those in a better position. The idea that poverty is determined, defined and measured by a group of people mostly unaffected by it is an intriguing one. Those gut-wrenchingly realistic depictions of the poor are for the intellectuals to discuss over Frappés and Subway sandwiches. 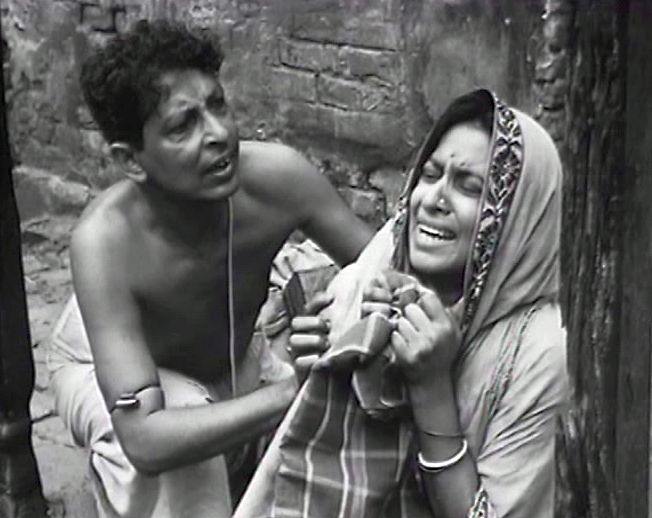 Echoing a similar train of thought in the discipline of literature is B. Krishnappa, a social revolutionary who is an important figure in the Dalit emancipation movement in Karnataka. In his essay, “Dalit Literature”, Krishnappa expresses his view of how writers who are not Dalits, who have not experienced the humiliation that they go through, cannot be true to the Dalit cause. Literature by them is not appealing for it is produced “by the satiated and the flabby, who consume antacids to digest their food, who live in multi-story buildings and commute only by car and airplane”. For these writers, Krishnappa argues, literature is just a source of “aesthetic pleasure” and less of a protest; instead of being realistic, it becomes imaginative.


An Indonesian film, the name of which I could not recollect, depicts a fisherman whose “home” is actually a straw shack. Days often end in brawls with his wife over how he is not earning enough to provide basic amenities to the family and the constant, crushing poverty seems too much to handle, but he gets up each morning, hoping and praying that he catches enough fish to earn and get food.

And Why Everything is labeled Overrated, these days?

The interesting thing is that after the day’s hard work he sits on the beach and looks at the sunset. Those moments are a kind of relaxation for him. This fact, in a way leads to another idea about how we elevate and desire “simple” things in life while sort of eliminating the poverty part — the struggling writer, painter or otherwise artistic individual — who taps into this working-class ethos of simplicity and goodness, pushing aside the capitalist framework he is seemingly forced to accept, becomes a very interesting idea to ponder on for those who do not have to worry about anything in life. What one does not consider is that, while idealizing poverty, we confound simplicity with happiness, and that is both naïve and, more often than not, quite offensive.


Apart from romanticizing poverty, one happens to feel a sense of sympathy after watching such films. ‘Sympathy’, although considered an emotion residing in someone having a good heart, is perhaps one of the most confusing of feelings. One doesn’t feel sympathetic towards a person who is leading a good life. There must always be something or other lacking in a person, for the other to have a sense of sympathy – lack of resources, income, education, well-being or capability. Sympathy is, therefore, a luxury.


The purpose of this article is to just trigger a thought about the intrinsic irony pervading art and cinema. How aesthetic beauty is found in the grime… in watching a mother going to sleep on an empty stomach, because she has fed whatever little food she had to her children… in that rather talented musician who has to play guitar around the Brooklyn Bridge in New York to survive, or an impoverished Indian farmer committing suicide for he cannot pay off his debt. Perhaps one may give this a thought while treating a few children who beg or sell things at the traffic signal with tea and buns in a shop by the roadside if not much. That beautiful graffiti on the wall can be appreciated later.

Cinema and the Art according to Wikipedia