How the Bank Robbery Scene in ‘Hana-Bi’ Discretely Disrupts Order: Japanese pop-cultural icon Takeshi Kitano possibly had the most interesting career of any celebrity you can think of. Starting out his career as a stand-up comedian, he has transformed himself into a TV entertainer, painter, writer, editor, cultural critic, and actor of the highest esteem. Immortalized by the famous advertisement in the Shibuya crossing, Kitano is such a central figure to a westerner’s perception of pop culture within Japan that it’s hard to imagine exploring Modern Japanese culture without him.

However, what could prove to be the magnum opus of his illustrious career is his foray’s into directing cinema. Adopting a style that was heavily inspired by predecessors such as Kinji Fukusaku and Jean-Luc Godard, Takeshi Kitano decided to uproot established norms and structures in Japanese film-making to reimagine the Yakuza and crime film genres. With stylish films such as Boiling Point, Sonatine, Hana-Bi, and the Outrage Series, Kitano sort to deconstruct tropes found within mainstream Japanese cinema at the time, whilst also infusing elements of his own cultural persona at the time (Namely, the silent crime figure stereotype/Absurd Humour/Paintings & Philosophy, all of which Kitano had become synonymous with). The most striking example of this style is Hana-Bi, which combines all the elements he worked on crafting into his previous filmography into one gorgeous, mediative film that tackles the nihilism of the criminal lifestyle with an operatic beauty that is difficult for any film-maker to pull off. For Kitano, Silence is paramount to violence, and his films use cinematic silence as a way to assault the senses and captivate the audience.

When discussing the works of Kitano, your average fan of cinema will often talk about the meditative, languid nature of his films. However, this characterization is painfully simplistic for what he manages to achieve. With an indelible eye for detail, Kitano manages to make the silence of cinema feel poignant, disrupting the established order whilst keeping its facade intact. When you look at a film such as Hana-Bi, the silence is used to tease you, and heighten the build to an expected climax that may or may not come as advertised. For those who haven’t seen this film, Hana-Bi is essentially about an ex-cop who must borrow from the Yakuza to pay for his ailing wife’s cancer treatment. As desperation sets in, we see Kitano’s character, years out of the force, become more desperate, from Robbing a Bank to Killing Yakuza members who are after him, as his repayments become more sparse. The film tackles themes of financial desperation, crime, nihilism, mortality, and criminality in a manner that deviates from the tradition within that form of cinematic storytelling. 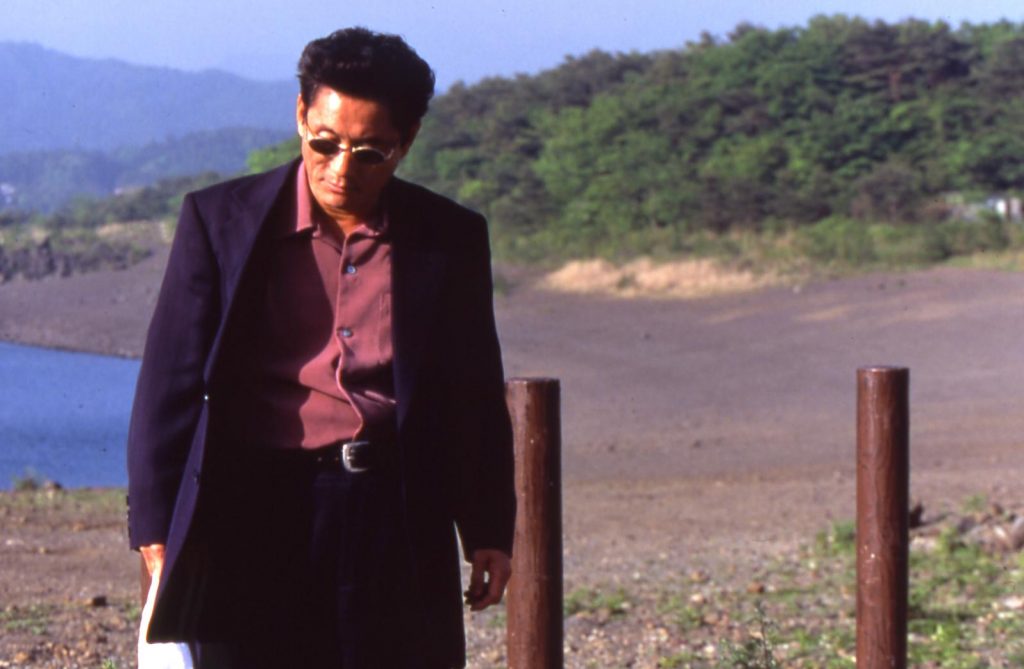 What works about this film is how it uses silence, not as something that builds towards a climax, but as the climax itself. The bank robbery scene around halfway into the film is such a perfect example of this. Within cinema, we generally see bank robberies as chaotic, tense, and climatic. However, Kitano chooses not to go this route, instead of having very little dialogue, mostly static camera movement and a sense of desperation that doesn’t make itself immediately evident. We are first introduced to this scene through a scratchy CCTV-styled shot of the bank, where people are generally going about their business. Kitano establishes this cold, distant feel to this scene to foreshadow how the bank robbery will play out. He also wants to establish a predetermined order, which allows him to deconstruct the tropes we’d expect within similar films.

After this establishing wide, camera then cuts to Kitano, in his car and dressed as a police officer, staring at a young teenager, who seems to be smirking at him and not taking him all that seriously. This is quite an interesting choice by Kitano because it’s almost as if he’s saying that his character has lost the aura of a police officer and that people with enough street-smarts and presence can see through his charade. Even as he rolls down the window and pretends to shoot at the delinquent, it all has a jovial, absurdist nature to it, and the kid doesn’t seem too concerned. Yoshitaka is unable to convince this kid, so will he be able to convince bank tellers? Alternatively, this could also be interpreted as a critic of the police officer archetype as a concept. Kitano’s character, an ex-cop, isn’t all that honorable, and the fact that this delinquent laughs him off could suggest to the audience that a police officer and criminal aren’t that different. Kitano’s characterizations of police, seen in films such as Violent Cop, aren’t always of honorable men of the law, so there could be credence to this perspective argument.

We then cut back to the same CCTV shot of the bank, this time we see Kitano walking into the bank. Kitano is often known for shooting quite flat, and his use of the scenographic space can be more limited than the average director. However, his decision to walk into this shot from the far-right corner of the screen establishes this space in a subtle manner and sets us up for what we expect to be a rather chaotic scene. We know that this is a bank robbery scene, so the aforementioned logic that has been established through similar films sets us up for chaos and drama. We have seen this scene before (A film such as ‘The Town’ could be used as a blueprint to bank robbery scenes in cinema), so we are pre-wired to expect a certain chain of events and actions from Kitano.

Since we’ve been conditioned by Kitano to see this as an ordinary bank through the CCTV footage, when he walks in, it takes a second for us to establish Yoshitaka’s presence there. Furthermore, we cut to the teller he is about to hold up, who puts a money tray down and proceeds to continue typing. To her, Kitano has yet to establish himself as the disrupter of order to these secondary characters, which is why the previous point is made more prescient when Kitano pulls the gun on this lady. Instead of cutting straight back to her, he cuts the bank teller next to her, who is established by cinematic logic to be the first to recognize the threat that Kitano poses to the established order. Here, Kitano is immediately subverting the tropes of a bank robbery. It’s unassuming to those not within the direct vicinity of Kitano, and the fact that the teller next to the woman being held up is the first to recognize this lets the audience know that this robbery is going to subvert norms. 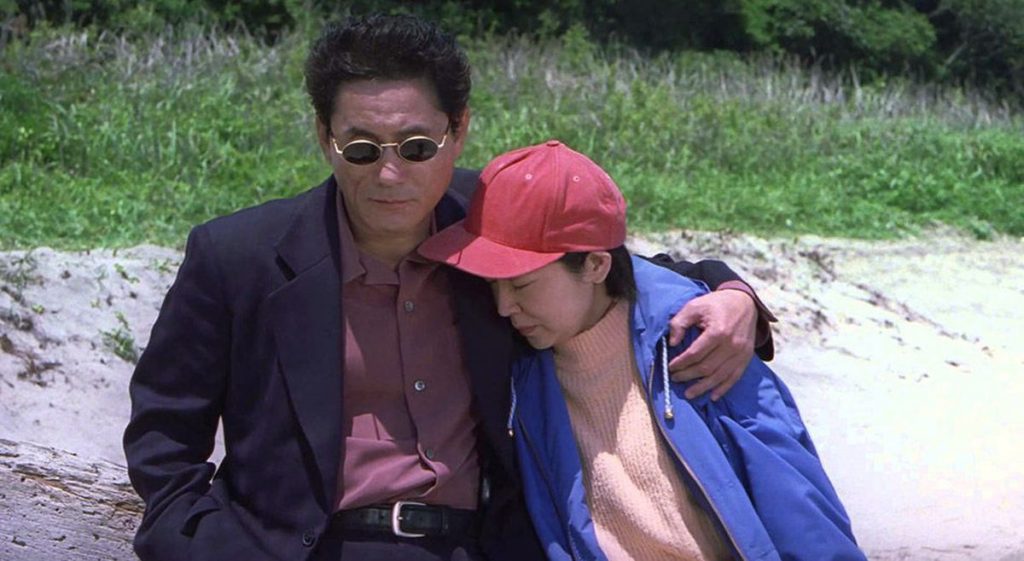 He then cuts back to the same flat shot of the teller, appearing to be looking straight into the camera (In fact, probably looking at the top right, to keep eyelines consistent and to prevent the destruction of the fourth wall) Now she looks frightened, but still keeping her cool as Kitano points the gun and hands over the duffel bag. She proceeds to take the bag and retrieve the money. Whilst this is happening, we see shots of an awaiting customer noticing this commotion, and the teller next to this lady, who Kitano briefly stares at. With the established scenographic space that is continually reinforced by the grainy CCTV footage, we see that Kitano is controlling the situation to a certain third of this space, not letting the commotion cause panic and managing to keep the facade of order palpable to everyone else in this scene. By confining the scene to a smaller section of the scenographic space, we get a more intimate perspective of each character within this scene. While the two bank tellers have no dialogue, we still get to see how they react and feel to this scene, infusing more feeling into the scene in spite of the intentionally cold and nihilistic directorial choices of Kitano.

The camera then moves to a shot of people talking in front of a painting of Yellow Flowers (Kitano’s own painting), which symbolizes happiness & peace. However, with the established motive of this film being the idea of ‘silence before the fireworks’, this establishes the idea that Kitano’s character is upholding a facade of silence, a fake quietus that is flimsily strung together to hide his own criminal deeds. A painting of flowers is, in many ways, just a way to put window dressing over something that would usually be flat and grey. The ‘flat and grey’ could be argued to be the archetypes of the cinematic ‘bank robbery’, but could also be Kitano. Kitano’s dressed like someone who is meant to be treated as an upstanding citizen, but underneath is a bleak, nihilistic depiction of a desperate man, empty from selling his soul to the Yakuza. As the teller hands over the money to Yoshitaka, he walks out. Despite the scene being almost completely silent, the silence was used to show the characteristics and personalities of Kitano, the two tellers, and the customer who recognizes this, allowing a greater emotional connection to those being robbed, as we could possibly relate to such a bizarre situation.

A Prior Article on Hana-Bi: A Meditative Trip of a Beleaguered Detective

Critics of this film style may cite these films as ‘boring’ or ‘pointless’, and to an untrained eye that may be a fair criticism. Kitano’s films didn’t do exceptionally well upon their original release in Japan and many audiences didn’t always connect with his directorial efforts. This scene, despite its placid nature that may turn off regular film audiences, is an unexpectedly tense scene, filled with humor, tension, suspense, and drama. The silence heightens what we see and makes this even more of a disruption of order within this world. We don’t see the drama of your regular bank robbery, but the fact that this scene is unexpected and breaks with cinematic traditions is why Kitano is so effective at disrupting chaos. Kitano ended his scene with a CCTV shot of him walking out of the bank, with the teller he has just robbed presumably notifying a superior as to what has just happened. Kitano continually emphasizes the notion of coldness through distance shots like this, and at the end of this scene, the audience may very well feel cold about what has just happened. We haven’t had a shootout, yelling, alarms, or anything else of that nature. We’ve mostly had silence, despite an event that has totally upended the order or both the bank staff & Kitano himself. However, Kitano’s focus on highlighting the reactions of the teller gives you a more personally visceral response to this situation, which in turn makes the minimalism of this scene even more poignant.

Takeshi Kitano remains one of the most alluring figures not just in Japanese pop culture, but in the wider arthouse cinematic movement. His ability to subvert tropes is second to none, and this bank scene is evidence of that. Instead of having the violence punctuate the silence, the silence punctuates the violence. We aren’t waiting for the dramatic bank robbery, however, we are instead of expecting the silence to explain the violence. When we see the wife of Yoshitaka (Played excellently by Kayoko Kishimoto) and her state, we can see why he has committed whatever seemingly heinous actions he has just committed. Kitano’s ability to do this is why he is such an effective filmmaker and has such a revered global presence within arthouse cinema.