Since his debut feature “Reservoir Dogs” in 1992, writer-director Quentin Tarantino has made a name for himself in the film industry, as one of the most unique voices in all of cinema. Through magnetic dialogue, awe-inspiring visuals, irresistible music, and a deep admiration for movies of the past, Tarantino has created some of the most infectious, genre-blending films of the past thirty years. But, there is something the auteur believes will outlive him, long after he has passed, and that is his phenomenal character work.

From philosophical hitmen, to vengeful brides, and cunning Nazis, the Oscar-winning director simply has a knack for quirky, unforgettable characters, and it’s pretty undeniable. Here, I will be counting down my picks for the absolute best. There is no way to objectively rank them, nor do I claim to be right. This is simply a celebration of one of Hollywood’s most sensational talents. For this list, we will omit written works like “True Romance” and “From Dusk Till Dawn”, and with that in mind: come on, let’s get into character. 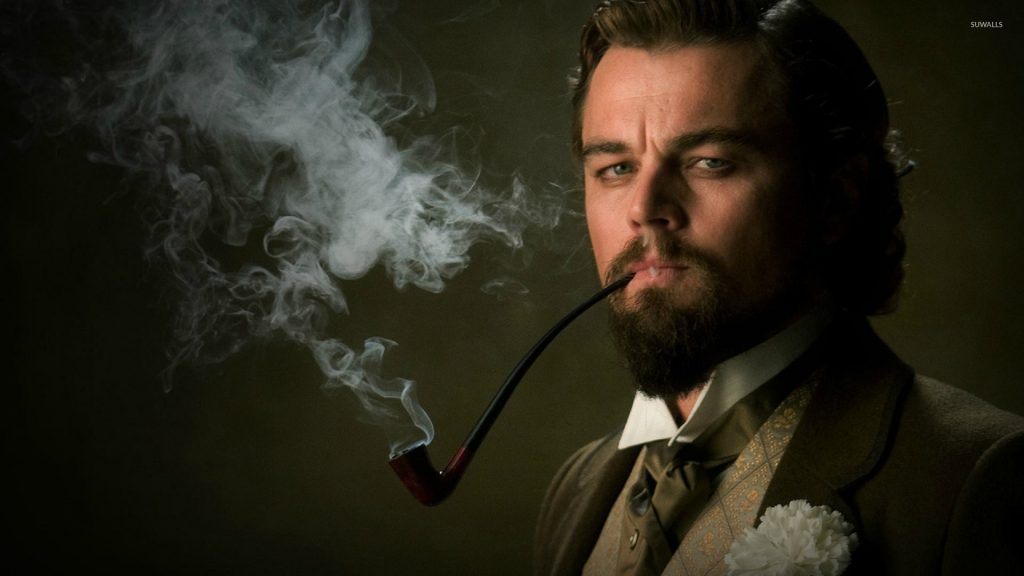 Seven years before his Academy Award-nominated performance as the lovably flawed Rick Dalton in “Once Upon a Time…in Hollywood”, Leonardo DiCaprio played the much more universally despised, Calvin Candie, in a role arguably more deserving of an Oscar nod. Candie is an unbelievably unforgiving character, and for an actor of DiCaprio’s caliber to willingly portray such a filthy and unfiltered villain speaks volumes of his dedication to the craft.

He’s a greasy, racist plantation owner, devoid of a single redeeming quality. Yet, Leo plays it with such a distinctly wicked poise and vile charisma that you can’t help, but every single scene that he inhabits beguiles you. It’s a tricky character to balance. He needs to be feared and hated, while also being the most prominent figure on-screen at times, but typical leading-man DiCaprio takes the challenge, and more than delivers; leaving behind one of the greatest antagonists in Tarantino’s filmography, as well as one of the absolute finest performances of his own established career. 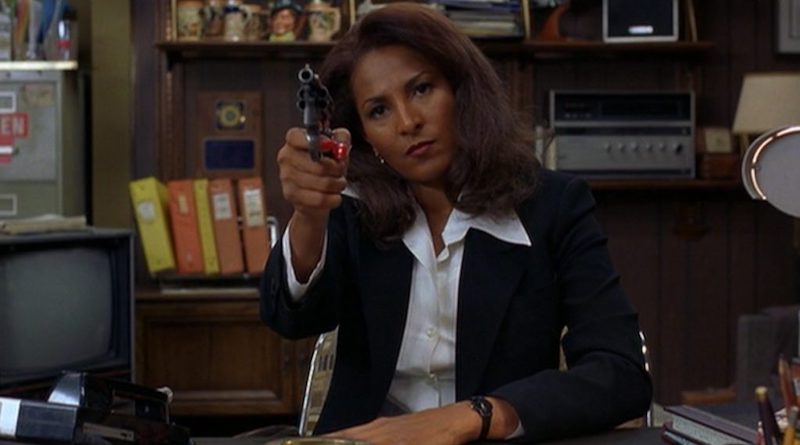 Tarantino has many skills as a director, but two of his more profound, lesser-stated gifts, are writing badass female leads, and revitalizing the careers of his favorite underappreciated actors, by casting them in knockout roles that audiences can’t resist. These strengths would combine when QT tapped blaxploitation icon Pam Grier, for the titular part of Jackie Brown: a down on her luck, small-time criminal stewardess, who finds herself caught up in the middle of an intense double-sided heist.

“Jackie Brown” has a reputation for being Tarantino’s most mature film, and much of that belief stems from Grier’s strong, grounded performance. She’s calm and collected on the surface, and plays the character beautifully, as not only a tough, resilient hero, but also a vulnerable mess; making for an intricately crafted, and innately relatable three-dimensional character to root for in a world of violence, greed, and betrayal. A bafflingly overlooked entry into Tarantino’s extensive catalogue of endearing protagonists, Jackie Brown is one of the crime genre’s boldest heroines.

Though far from a noble, picturesque hero, Major Marquis Warren is the main protagonist of Quentin Tarantino’s snowy, secluded murder-mystery. The infamous bounty hunter may not be typically cited as one of Samuel L. Jackson’s best, but as a character, it’s hard to think of a better lead for this wildly intense western. Despite his old age and being the constant subject of racial hatred/bigotry, the former Civil War veteran overcomes; unravelling the film’s elaborate conspiracy, and dishing out a bloody retribution, with two Colts and a sinful grin.

Offering spurts of merciless violence, comedic relief, and a chilling cackle that fills the frosty air with anarchy and terror, the Major never fails to break the occasional monotony and play-like structure of “The Hateful Eight”, with hellish charm. Even in the film’s more quiet moments, Jackson takes center stage, commanding the screen with his signature assertive line-delivery that lends itself to some unforgettable monologues. Blurring the lines between hero and villain effortlessly, this quick-witted executioner is one of Tarantino’s most equivocally compelling creations, to date.

Eccentric wife to notorious mob boss Marsellus Wallace, Mia is one of the most fascinatingly enigmatic characters in all of film. A free speaking, fun loving, untethered spirit with a serious cocaine addiction, Uma Thurman masterfully converts what could be a very unrefined role, into a fully fleshed out mess, employing a steady balance of elegance and chaos that pops off of the screen. Sporting chique clothing and an iconic hairdo, Wallace dances her way through the violent, crime-ridden world of “Pulp Fiction”, with a reckless abandon that radiates through the gritty atmosphere of Tarantino’s intertwining gangster classic.

Much like the rest of the characters in the film, QT’s Oscar-winning screenplay explores the ups and downs and real life struggles of Mia Wallace: a character who would be displayed as one-dimensional and ‘cool’ in most other movies. She’s a self-destructive wreck, and the film, through Uma’s enthralling performance, never shies away from showing that side of the otherwise enchanting figure – constructing an everlasting piece of film history. 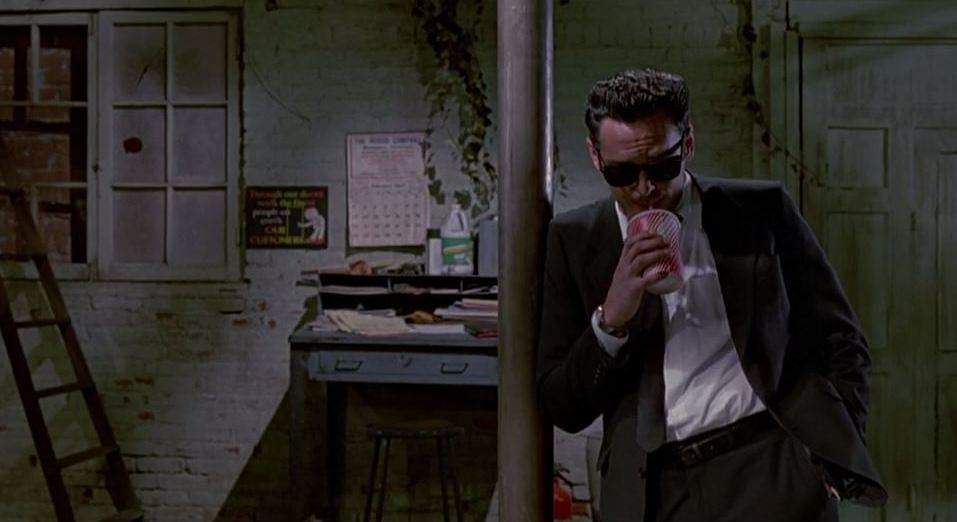 We discover a little about Mr. Blonde throughout the runtime of Quentin Tarantino’s debut feature, but we feel his presence, nearly thirty years later. Michael Madsen’s controlled depiction of the remorseless maniac remains one of the greatest accomplishments of his career, and an absolute treasure of Tarantino’s beloved filmography. Few villains are as effortlessly intimidating as Madsen’s cold-hearted criminal, and it all commences with his chillingly laid-back delivery.

He’s the pure embodiment of a screwy crook, but you’d never be able to tell through his nonchalant exterior, and alarmingly calm demeanor. Scummy characters fill “Reservoir Dogs” to the brim, but Mr. Blonde is undoubtedly the most cruel, with his slick suit and pitch-black shades cloaking the horrors that lie behind his serene facade. Inherently gripping, dreadfully imposing, and utterly out of his mind, Blonde lays claim to not only the most deranged dance scene in all of cinema, but also one of the most effective villains in QT’s extensive body of character work.

Check out
Check out
Every Quentin Tarantino Movie Ranked

From “The Thing” to “Tombstone”, Kurt Russell has long been deemed one of Hollywood’s most prolific and reliable leading-men, even finding tremendous success in his old age. However, the legendary silver-screen veteran doesn’t quite get enough credit for how much of a chameleon he can be in certain, more obscure roles. Case in point, Quentin Tarantino’s cult-classic horror flick, “Death Proof”. Chewing the scenery as a homicidal stuntman with an appetite for carnage and destruction, Russell plays the psychotic driver through a tenaciously berserk charisma, with unsettling tones of his trademark movie star appeal, shining through.

It’s a layered performance that ranges from horrifying, to darkly comedic, to pitifully cowardice, and it works on every level, never feeling forced or cheesy – genuinely instilling a sense of unpredictable danger at every turn. The film he occupies may be generally considered to be (even by Tarantino) the worst entry in the director’s filmography, but there is no denying Russell’s eerie screen presence as Stuntman Mike; earning the antagonist a place in movie history, as a horror icon in his own right, and the most successful component of the experimental slasher. 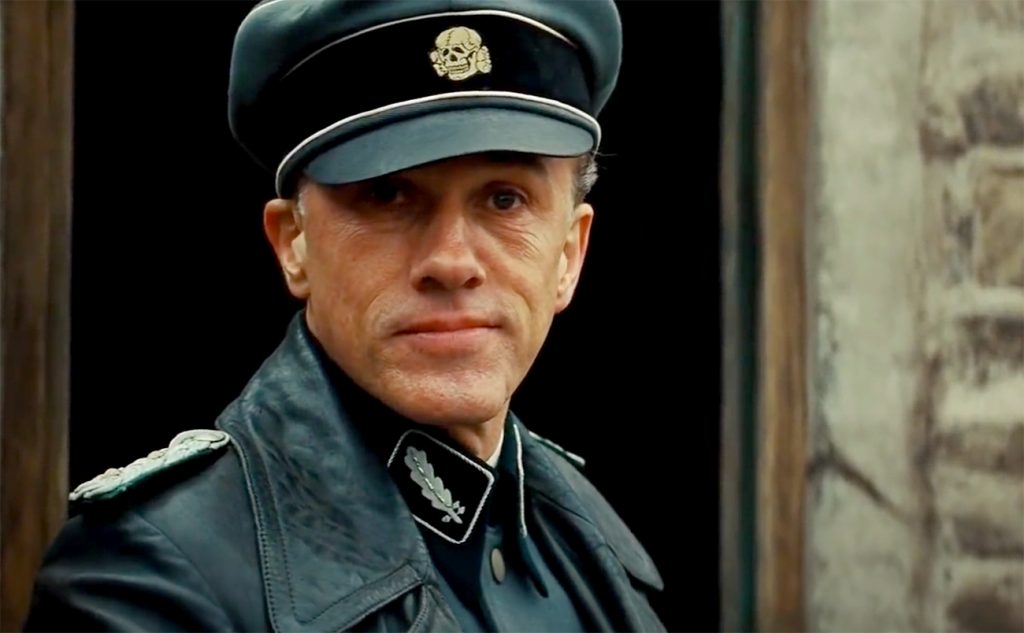 Many things need to come together in order for a character to translate well from the page, onto the screen. It takes the right look, the right director, and of course, the right actor. Tarantino famously made the decision to scrap “Inglourious Basterds” if he couldn’t find the perfect actor to play SS Colonel, Hans Landa – whom he considers, to this day, his one of the greatest characters writing. It’s an undeniably attractive concept for a villain, made all the better by a career-defining performance by Christoph Waltz, for which he would win his first Oscar.

Landa is essentially Sherlock Holmes in the form of a ruthless Nazi, and the bilingual bad guy is definitely a key reason as to why QT’s revisionist WWII epic works as well as it does. As much as you hate Landa, it’s impossible to deny how naturally charming Waltz is in the role, using a sharp wit and deceiving manners to mask the darkness beyond the surface. He commands every scene, not by being physically imposing, but mentally imposing: a very difficult thing to convey through the lens, and it makes for one of cinema’s most distinctively unique villains. 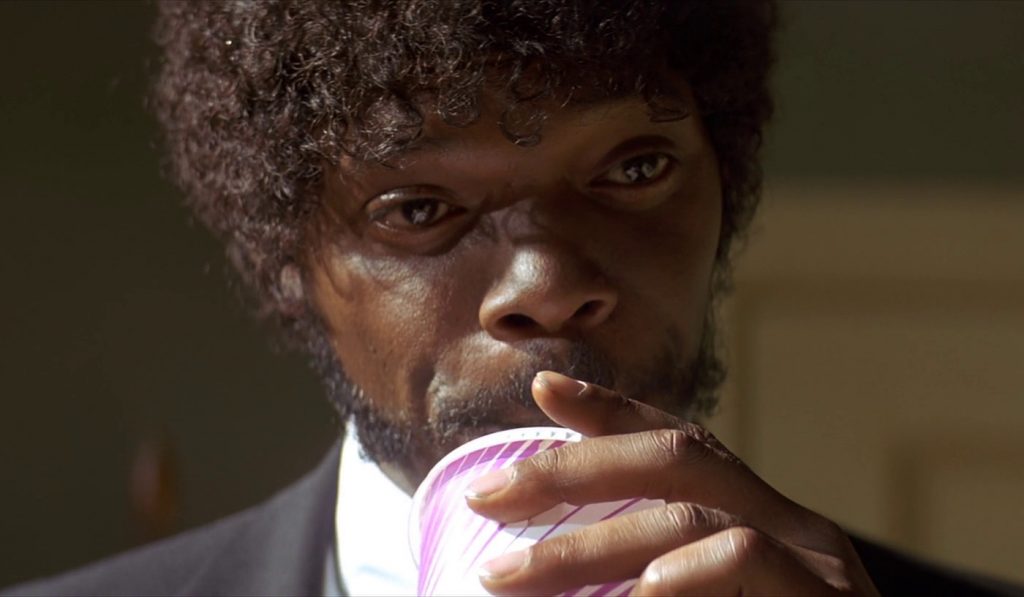 The quintessential Sam Jackson performance remains one of the most indelible pieces of Quentin Tarantino’s entire filmography. “Pulp Fiction” may be a movie packed full of colorful characters from start to finish, but none have a more substantial arc throughout the film’s considerable runtime, than Jules Winnfield: tyrannical hitman, turned benevolent shepherd. Realizing the error of his murderous ways, the Jheri-curled gunman chooses a different path, as a guiding force for the weak and hopeless; growing from his past mistakes, and focusing on reshaping his future.

It’s rare for a single supporting character to be given so much vindication and development in a big ensemble piece like this, but QT and Jackson pull it off, seamlessly. However, if there is a more defining trait to the role, it has to be the astonishingly powerful line-delivery. Tarantino has been on record stating no actor performs his dialogue quite like Sam, and never has that been more evident than with his famous recitation of Ezekiel 25:17, a mighty speech for the ages, that marvelously encapsulates everything this character is all about. 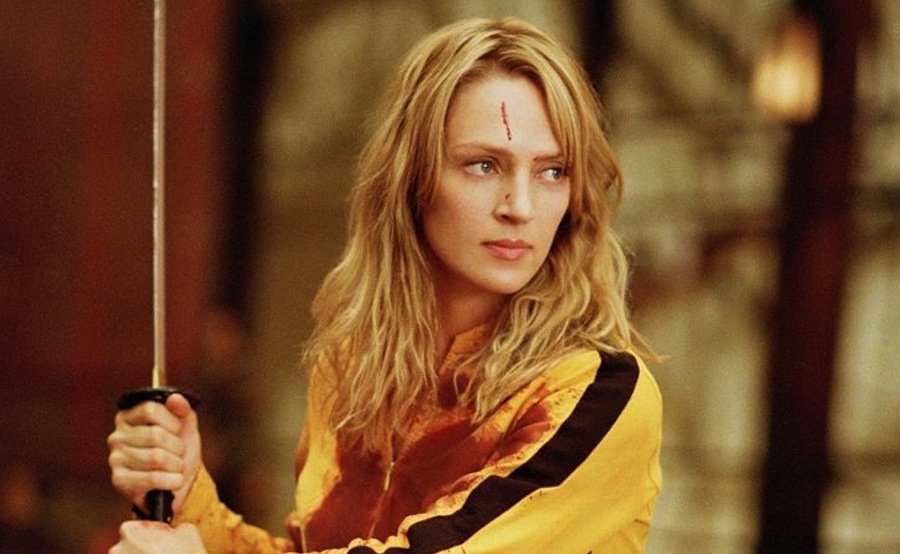 Few images in the film are as engraved into pop culture, and as synonymous with Quentin Tarantino, as Beatrix Kiddo (aka the Bride, or Black Mamba) dawning her iconic yellow jumpsuit and wielding her deadly Hanzo katana amidst a horde of lethal assassins in the two-part genre-fusing classic “Kill Bill”. She’s likely the greatest one-woman-army to ever grace the screen, as well as the eternal symbol for feminist revenge in cinema.

Leaving a trail of bodies in her wake of those who have wronged her, Uma Thurman’s unrelenting bride may claim some of the most extraordinary fight scenes in movie history. Uma renders a touching and sympathetic layer to the character, thanks to Uma and Quentin’s warm-hearted love for the bride. It’s a complex figure who wears many different faces throughout the course of the films’ combined four-hour-plus long runtime, but that’s what makes her such an endearing hero. A cold-blooded killer with a compassionate soul, struggling to be released from her gruesome past, on one last hunt to clean the slate for good – how could you not root for that?

Combining the idea of rewriting history from “Inglourious Basterds” with the concept of a renegade on a one-track, bloodthirsty journey, from “Kill Bill”, Tarantino gave birth to the ingenious character of Django. From former slave, to quippy bounty hunter given the chance to rescue his wife from her racist plantation captors in Mississippi, Jamie Foxx’s Django owns this spaghetti western revenge-fantasy; fictitiously bringing justice to the antebellum South, with a restless gun, style, and flair.

Elevated by Tarantino’s smooth dialogue and a thunderous theme song, Jamie Foxx delivers an impressively nuanced performance as the ‘fastest gun in the South’, playing both the meek, mild-mannered slave, and the full-blown action hero side of the character, extremely well – offering a depth and swagger to a role that could have easily been fairly one-note, or overdone. Foxx’s chemistry on screen with Christoph Waltz makes for an exciting pairing, but it’s his solo scenes towards the end of the film that truly cement his status as a silver-screen icon. While unfortunately, a figure like Django never really existed, it is certainly fun to imagine. Only from the mind of Quentin Tarantino.