“Takeshi Kitano’s Golden Lion winner Hana-Bi (‘Fireworks’, 1997) is in many ways the perfect amalgamation of the film-maker’s humanist expression and unconventional formal tendencies.”

Takeshi Kitano has been a ubiquitous figure in Japan since his early 1970s stint as stage comedian, forming a comic duo with his friend Kiyoshi Kaneko. The slapstick comedy troupe referred themselves as ‘Two Beat’ (Beat Takeshi and Beat Kiyoshi). Later, Kitano became Japan’s famous television host and received his first major movie role in Nagisa Oshima’s Merry Christmas, Mr. Lawrence (1983). In 1989, he was cast in a Dirty Harry-esque cop drama titled ‘Violent Cop’. When the director fell ill, Kitano took the reins and heavily rewrote the script to imbue his signature deadpan humor, sudden bursts of violence, notes of impassivity, subtle social critique and other symbolical allusions. The film was a critical and financial success in Japan, which launched his career as an art-house film-maker.

International audiences got acquainted with Kitano’s films after his 1993 distinctive mobster cinema Sonatine. In 1994, a motorcycle accident left him in paralysis and it took extensive surgery to recover (the resulting inflective facial tic due to the accident added to Kitano’s unique screen presence). Kitano took up painting during the recovery phase (which had adorned gallery exhibitions). Although Kitano was best known for movies revolving around yakuza and cops, he has made some breezy dramas, suffused with his artwork, bouts of goofy humor, and musings on social hierarchy and morality. A Scene at the Sea (1991), Kids Return (1996), and Kikujiro (1999) serve as best examples of a more palatable, profoundly touching brand of Kitano cinema. 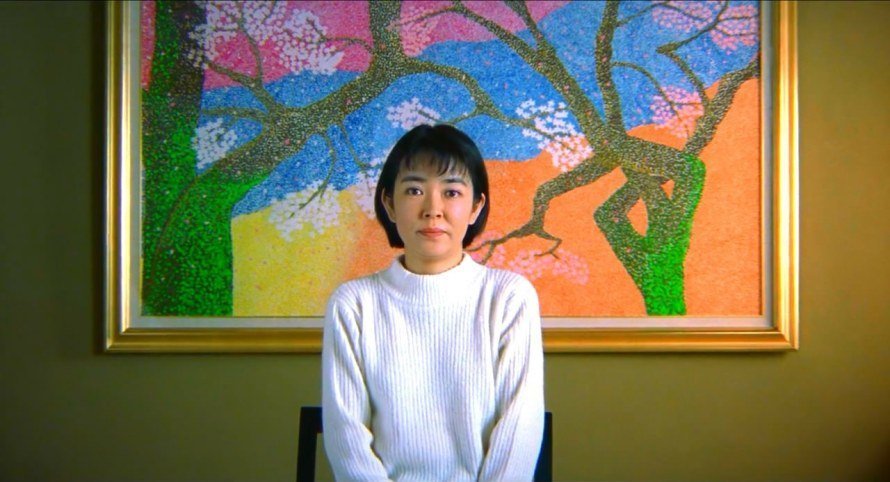 Takeshi Kitano’s Golden Lion winner Hana-Bi (‘Fireworks’, 1997) is in many ways the perfect amalgamation of the film-maker’s humanist expression and unconventional formal tendencies. As in Sonatine, Hana-Bi is filled with brilliant motifs and clever devices which couldn’t be detailed in the plot description. On the outset, the film revolves around a stoic and an unusually violent detective named Nishi (Kitano). He quits the police force after a gruesome incident, which results in the death of a police officer and confines another to wheelchair. Nishi’s personal life is equally unfortunate: his little daughter has passed away and his innocuous, soft-spoken wife Miyuki (Kayoko Kishimoto) suffers from leukemia. In order to settle his debt with the yakuza and to provide his wife a peaceful farewell, Nishi decides to rob a bank (and also to support the young wife of widowed police officer Tanaka).

Kitano, who also served as the editor in Hana-Bi, juxtaposes Nishi’s journey with Detective Horibe’s (Ren Osugi) artistic journey. Horibe’s permanent confinement to wheelchair has led to his separation from his wife and daughter. Now the suicidal and isolated former detective takes up painting (on Nishi’s insistence), drawing beautiful pictures of people and animals with flower heads (Kitano’s own paintings during his rest after the accident appears throughout the film). As Horibe refines his artwork’s technique with increasingly vivid impressionistic portraits, it seems to directly offer a commentary on the emotional nature of Nishi’s placid journey (with his cancer-ridden wife) and further hints at his inevitable fate.

Takeshi Kitano could be best described as a film-maker who uses the shell of genre cinema to implicate oneself with the study of Japanese cultural and social mindset. Even though Hana-bi (and Sonatine) revolves around familiar violent feuds – between cops and yakuza (or yakuza clans) – Kitano’s cinematic achievement lies in his unique formal expressions,which largely attunes to eastern perspective of morality and Japanese parameters of social code. Film critic M.K. Raghavendra addresses this formal characteristic as: “Watchfulness at all times but stillness until the right moment”.

The impassive watchful quality so much pervades the narrative that the sudden outburst of violence comes across as ripple in this ocean of dank, inert atmosphere. Hana-bi smartly conveys its introspective tone through its non-linear construction, in which the narrative slowly becomes a whole as Nishi’s mundane life flows alongside brief glimpses into trauma inflicted by the recent past. The bloody shootout, which Kitano keeps hinting in bits and pieces showcases Nishi’s exacerbated position since he blames himself for the outcome of the shootout.

The recurrent visual motifs in Hana-Bi are apparently flowers and fireworks (sea is another vital visual motif), the meaning of which is evoked side by side as Nishi’s journey with his wife is riddled with extended moments of lyrical beauty and unpredictable, staccato burst of violence. The duality could also be found in Horibe’s artistic endeavor that’s alternately ornate and anguished in its detailing.

What drives Hana-Bi more than the plot conventions is the subtly expressed existential frustration, brimming with the Eastern philosophical notions. A child on the beach playing with a kite that doesn’t fly poetically articulates something about the restlessness of existence. However, Kitano by constructing moments of tenderness and quiet intimacy in the relationship between Nishi and Miyuki indicates at the sense of optimism and meaningfulness one defiantly elicits from the overall hopelessness. Altogether, Hana-Bi (98 minutes) is a remarkably sublime and melancholic feature contemplating on the themes of mortality, morality, and self-obsession.

The Tunnel [2011] Review: Undone By Its Weak Ending