Barry Season 3, Episodes 1 & 2: Recap & Ending Explained: Bill Hader as Barry Berkman was a game-changer as far as dark comedies are concerned for television. The beloved SNL star has made a huge impact in his appearance as the serial-killer turned actor craving love and identity. The HBO original is hauntingly real and rooted in its exploration of heavy themes and goes about its business immersing comedy in drama. The first two seasons of ‘Barry’ have been a massive success, and the first two episodes of season three have now been released on Hotstar for Indian audiences. Now that Barry is knee-deep in the mess he created with the Chechens and Detective Moss in the earlier seasons, it remains to be seen how Gene Cousineau, his erstwhile acting instructor, makes sure Barry pays for his crimes.

The relationship dynamic between Barry and most other characters in the show has been topsy turvy. These two episodes have proved no different. His engagement is always volatile and has come a full circle from brethren-like camaraderie to the most violent form of enmity. Fuches is now at the latter end of the spectrum and that is not good news for him. Anyway, let us dive straight into the nuances of the recap of the first two episodes of Barry’s season three.

Barry has sort of sold himself to the internet. He is now a hitman on hire from the dark web. He is now in a lackluster and passionless relationship with Sally, who is now acting in her own written television show. The police investigation into the many mishaps of last season continues. Hank, representing the Chechens, decides to save Barry and blame the death of Detective Moss and others on Fuches, calling him “the Ravine”. He is actually more focused on exploring his newfound relationship with Cristobal. The two have now gone against their gangs’ traditions and priorities for the sake of love.

Barry’s frustrations with his new profile are not a secret. He lets them show in his usual routines and behavior. Out of nowhere, Gene, who now knows that it is Barry who killed Moss (as revealed in the final scene of season two when Fuches whispers it into his ears) calls Barry into his office. He does so under the garb of starting his class again. To Barry’s surprise, Gene has a gun pointed at him but is unable to keep it intact. Barry takes Gene hostage. He is at the same place where he killed Jeff and his forgiving employer. Although he doesn’t want to, Gene knows the truth. Gene begs Barry to let him live. But Barry realizes that he has an idea crazy enough to work.

Barry’s desperation to set things right is shown in the horribleness of his idea. Despite his pure intentions, Barry thinks he can keep Cousineau off his case by getting him busy and acting again. He first visits Sally’s set to demand her to cast Gene in a small role. She refuses, and he gets extremely angry at her, causing a scene. Sally is shaken but doesn’t respond. Barry does not give up so easily. He visits a couple of other places looking for prospective people to cast Gene. 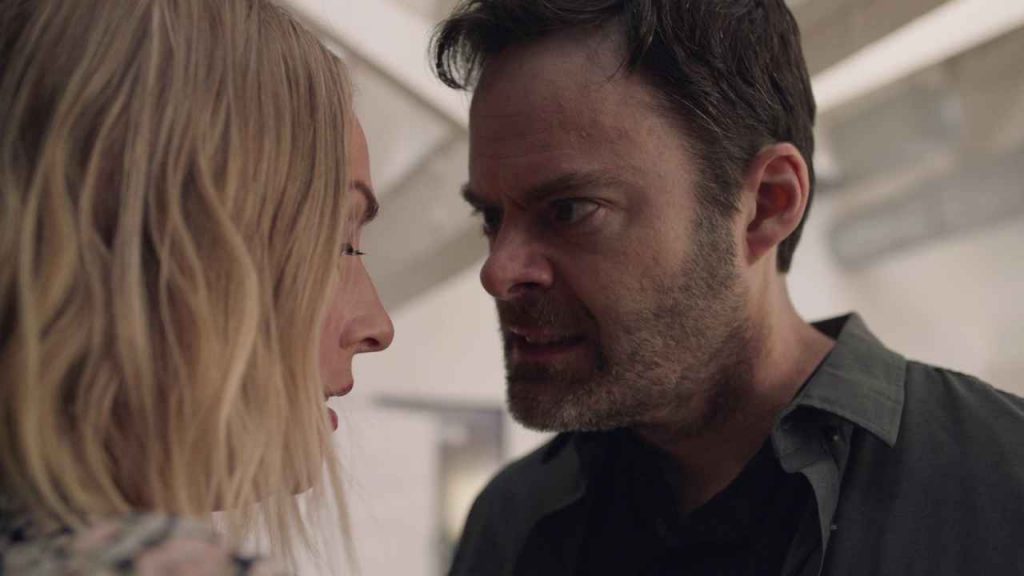 In episode one’s love affair, Cristobal and Hank are happy. Their relationship, though, does not last long. Without any notice, Cristobal’s father-in-law flies in from Bolivia with his elite team of killers to bring him back to his daughter and finish the Chechen operation in the US. Fernando is sent straight to the Chechen’s secret spot, where they load the drugs. But Cristobal forecasts a warning to Hank and his close associates before Fernando’s men arrive and cause the massacre. Sally’s tumultuous production process gets further traumatized when her producer moves her show’s release date by several weeks.

Another rival network is releasing a show just like her’s before the original release. This sends Sally rambling into a panic attack and on war footing to complete it in time. She tries to make up with Barry, who finally lands a job for Gene, but is given a cold shoulder by him. Barry, who is about to give Gene the good news, finds that he is not in the trunk anymore, where he locked him. After a long chase, Barry reaches Gene’s son’s house before him. He shoots a warning to him that Barry will kill Gene’s son and grandson if he doesn’t listen to him.

The two ending points that matter going ahead in the season are Sally’s realization of her relationship and Gene’s fatal warning. Sally wonders if it is worth it to stay with Barry anymore given his erratic bursts of anger and indifferent behavior towards her. The early electricity that brought them together seems to have gone missing and she is now feeling it. My guess is, that it will soon become an issue for Barry and will drive him further away from hints of socialization. Secondly, the warning he gives to gene is a reminder of his true nature. He is now conditioned to kill and behave like a killer. Just some hours ago, he was crying in front of Gene and begging for forgiveness. And now, he threatens to kill his entire family if he doesn’t cooperate? This dichotomy is an important feature of the storytelling in this season. It lends another dimension to the overall arch of his character that has traversed three seasons now.

The dark and intense side of Barry’s character is found in abundance in this episode. He’s trying to become a new person and change for the better is all pleasant until you see this side of his. The scene with Sally truly was terrifying. It was so viscerally acted out that I do not think anyone except Hader was acting. The episode runs at a smooth pace, nicely touching upon important plot points. Hank and Cristobal’s heartbreak was tragic to watch and epitomized how much they love each other. Despite not giving too much away, there is a general sense of understanding about what is to come next.

The development of Sally’s storyline is something along the lines of Betty Draper from Mad Men. I find a lot of similarities between the two women and how their character arcs merge at the junction of the toxic personalities of their husbands. The creators have jolted audiences with a bolt of reality about Barry’s character. Besides the limelight given to his journey of change, he remains a broken man inside. Such is the complexity of his character, and we don’t know when he is acting and when he isn’t. I guess that is where the magic lies. Gene is sort of becoming Barry’s voodoo doll. He just cannot decide what to do with him but cannot destroy him either. It will be fun to watch him navigate this part of his life!