“In many ways, Pale Flower (‘Kawaita hana’, 1964) was Shinoda’s first masterpiece, a film that chronicled the existential dread of a middle-aged yakuza.”

The fresh, bold, and provocative Japanese cinema of the 1960s (dubbed as the ‘Japanese New Wave’) reflected stark existential themes as the cornerstones of the very patriarchal Japanese society was uprooted by the nation’s World War II defeat and post-war American occupation. The moody, stylized black-and-white expressionism of the ‘new wave’ directors deftly captured the social turmoil, manifolding in the void of values. The early new wave films were produced by the Japanese studios (especially Shochiku). Like every established film studio around the world, Shochiku remained combative to the new generation film-makers’ attempts to make arty, anarchistic works. For a studio that produced masterpieces of Kenji Mizoguchi and Yasujiro Ozu, the subversive contemporaries like Nagisa Oshima, Yoshishige Yoshida, and Masahiro Shinoda (who all joined the studio in their early 20s and worked as assistant directors) may have seemed anomalous. They dealt with themes and aesthetics that didn’t go well with the entrenched, ‘traditional’ ways of the studio.  Elsewhere, Shohei Immamura and Seijun Suzuki (at Nikkatsu studio) faced similar problems although they steadfastly worked their way through the constraints of commercial obligations, first within the studio system and later through independent productions.

Unlike the unequivocal political films of Imamura, Oshima, and Yoshida, Masahiro Shinoda was concerned more with aesthetic revolution. Shinoda was sympathetic to radical political movements of the time, but he was mostly a centrist and his narratives weren’t overtly concerned with anti-government or anti-American activism. However, Masahiro Shinoda’s early works were considered subversive for its aesthetic innovation and due to his collaboration with avant-garde artist Shuji Terayama (‘Killers on Paradise’, ‘The Scandalous Adventures of Buraikan’) and music composer Toru Takemitsu.

In many ways, Pale Flower (‘Kawaita hana’, 1964) was Shinoda’s first masterpiece, a film that chronicled the existential dread of a middle-aged yakuza. Although Pale Flower was a thin character study with magnificent and dynamic visual style, it ran into trouble with censors and studio executives. The film’s co-screenwriter Masaru Baba felt that the visuals have shrouded certain important aspects of the story, whereas the censors were concerned with detailed gambling scenes (and the studio also felt it was not a ‘proper movie’ for their audiences).

Related to ‘Pale Flower’: Pigs and Battleships [1961] — A Probing Portrait of a Marginalized Society

Yet despite all such impediments, Pale Flower emerged as an idiosyncratic yakuza film, instilled with fatalistic despair and moodiness of the film-noir (critic Roger Ebert put it in his list of ‘Great Films’). The movie opens with the brooding voice-over of hardened, mid-ranking yakuza, Muraki (Ryo Ikebe) who’s fresh out of prison. He muses about how nothing changes and wonders why he was incarcerated for killing one of these ‘stupid animals’ on streets. Not much of a backstory is provided for Muraki’s sense of detachment. From his rigorous morality and preference for solitude, one can discern his relentless quest for identity and spiritual satiety. Muraki has gone to prison for killing the member of an opposing gang. Now the bosses of both the gangs have made an alliance to encounter the increasing dominance of a third group.

But the narrative isn’t concerned with a doom-laden gang war. What we rather witness are the quotidian activities and eccentricities of the criminal class members. The yakuza chief is obsessed with his oral health. On another occasion, the chief buys a watermelon and shares it with his foot-soldiers. Later, smoking a cigarette, he dispassionately lays out the necessity to murder a rival. Unlike typical gangster cinema, the yakuza bosses and their henchmen here could easily pass off as corporate employees vexed by client requirements. The very Japanese quality of hierarchy and obedience are firmly established within the organization that the top-level yakuza don’t have to constantly inspire fear. Nevertheless, Pale Flower isn’t actually about a turf war. The aforementioned aspects retain the somber quality, necessary to examine the existential stupor of Muraki. 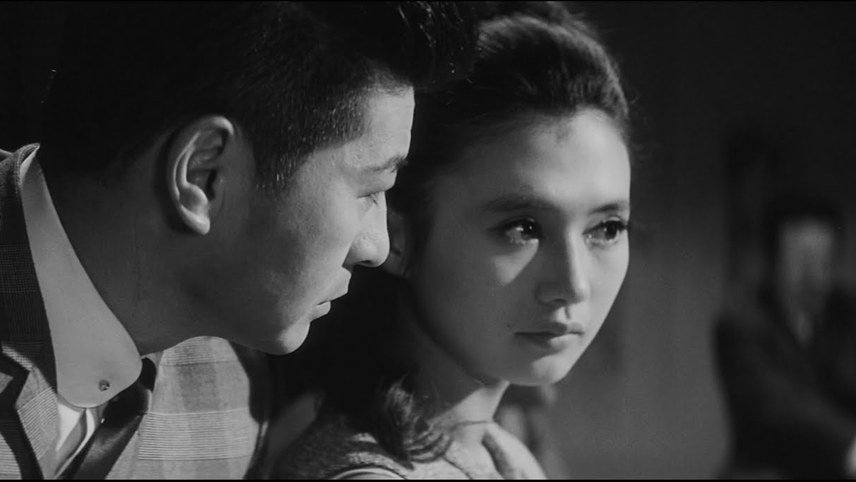 Upon his release, Muraki finds temporary relief by immersing himself into the world of drag racing, cabaret nightclubs, and gambling. In a gambling den, Muraki finds a kindred spirit: a mysterious and a beautiful young woman named Saeko (Mariko Kaga) who gambles away her money with reckless abandon. Using his underworld connection, Muraki lures Saeko to accompany him to covert high-stake games, which also put the wealthy, thrill-seeker Saeko in contact with a junkie gangster, Yoh (Takashi Fujiki). Muraki and Saeko come off as soulmates and their relationship stays platonic. They deeply understand the malaise and stasis of urban life, but the much younger Saeko seeks to purge her discomfort by shooting up drugs, which troubles Muraki. The yakuza anti-hero’s anxieties about Saeko’s downward spiral increases alongside his fear for the vile Yoh, who represents inhumanity and hopelessness that contradicts even Muraki’s notions of morality. Eventually, through an act of killing, Muraki determines to feel alive, and in the process probably ‘save’ the free-spirited Saeko.

In an interview, published in the book ‘Outlaw Masters of Japanese Film’, director Shinoda states that the original story (by Shintaro Ishihara) is an allegory for the Cold War situation, in which Japan’s identity suffered. Shinoda says the purposelessness and ennui experienced by the two spiritually hungry central characters were a reflection of his nation’s sociopolitical conflicts. Of course, it may not be possible for modern viewers, freshly discovering Japanese New Wave, to comprehend this interpretation. Nevertheless, the palpable estrangement and sense of futility felt by its leads can continue to resonate with the younger generation audiences. In fact, Shinoda’s gorgeous imagery balances between naturalism and surrealism.

Also by Masahiro Shinoda: The Silence [1971] — An Insightful Study of Inner Spiritual Conflicts

Despite the grim subject, Shinoda finds absurd humor in examining the naturalistic moments in the lives of yakuza members: two suited gang bosses have lunch and learn Western table manners as a Mona Lisa portrait hangs in the background; the gang boss expressing concern over the nurses’ handling of a newborn baby, etc. At another occasion, the film-maker tries to voice-out Muraki’s emotional undercurrents through a spectacularly stylized dream sequence. Shinoda also dabbles with symbolism (for e.g., the clock imagery in Muraki’s former lover’s apartment) and showcases violence in an intriguingly theatrical manner (the stabbing that’s staged with operatic music).

Masao Kosugi’s cinematography brilliantly frames the features of Mariko Kaga (especially her desolate black eyes) and world-weary looks of Muraki (cloaked in cool tweed jackets) to keep intact the feelings of displacement. The gambling scenes were excellently shot. Even though we don’t have any knowledge of the game, there are frequent cuts within the smoky gambling dens to generate a great intensity. Shinoda often makes Kosugi to shoot his central characters through grids and glass panels, evoking their trapped status. Toru Takemitsu’s discordant yet memorable score also boasts the exquisite dark visions of Shinoda.