Home»Reviews»OTT»Netflix»Stranger Things [Season 3] Review: Back to the Teenage Nostalgia!
Netflix/Reviews

The latest season of this trustworthy series is not quite as rich as the first two. But, it maintains the standards of its admirable characters and the makers’ mystical story-telling techniques. The last episode is by far the best one till now. This is the character-driven summer entertainer where we all get a chance to enjoy the teenage nostalgia for sure!

“When Hawkins is conjured again by the stranger things, El and her friends must have to break the links.”

Imagine how hard it can be when your feature is the combination of all old school nostalgias and you still have to extend it without losing its uniqueness. But the Duffer Brothers’ skills are way too good in keeping the things consistent. The first two seasons were literally bang for the buck. In the first season, they built up the characters in one of the most decent ways.

Remember the farm of rotten pumpkins? The second season had some mind-blowing moments just like that. The latest season of this trustworthy series is not quite as rich as the first two. But, it maintains the standards of its admirable characters and the makers’ mystical story-telling techniques.

I bet you, the first thing you will do after starting the first episode of season 3 is “smile”. It will come naturally and will prove your love for these characters. The season starts in the time of the summer vacation. So, high school things won’t come here. But, the experimental things will return for sure.

The story begins with El (Millie Bobby Brown) and Mike (Finn Wolfhard) growing up into their relationship and Chief Hopper (David Harbour) being over-protective for El. Jonathan (Charlie Heaton) and Nancy (Natalia Dyer) are struggling for their internship. Lucas (Caleb McLaughlin), Will (Noah Schnapp) and Max (Sadie Sink) are curious for the Dustin’s (Gaten Matarazzo’s) new girlfriend called Suzie. While calling her with the own signal transmission set-up, Dustin captures the secret Russian codes. 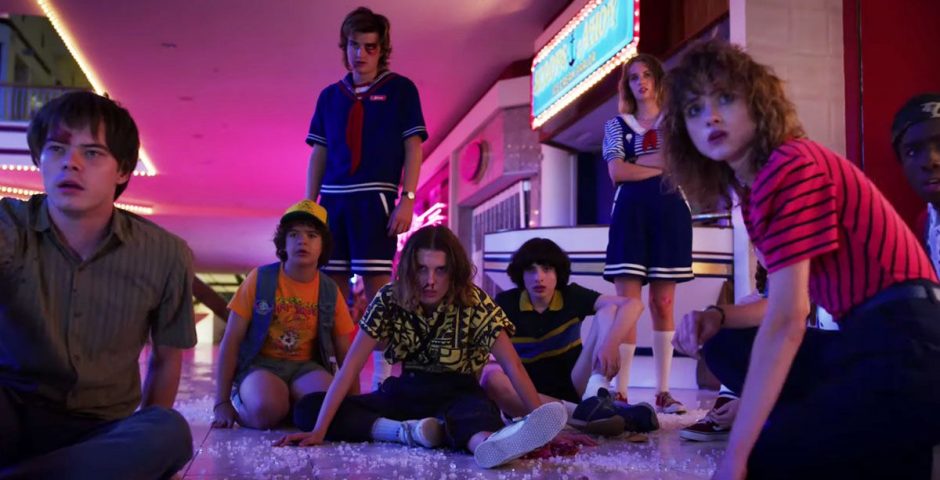 Billy (Dacre Montgomery) invites Mike’s mother for the date night and strangely he accidentally got wrenched by the secret force on the same day. Here we have our outstanding rat sequence where all the rats of the town meeting at one place. There is a certain quality about “Stranger Things” that it offers scares, laughs and thrills in a balanced manner in each episode.

Robin (Maya Hawke) and Steve Harrington (Joe Keery) works at the ice-cream shop. With their help, Dustin succeeds to crack the code. Will starts to feel the upside-down thing again and his mother Joyce Byers (Winona Ryder) got a hint about the conspiracy by the magnets strangely falling from the refrigerator. At the end the all team meets up and fight against the stranger things just like the other seasons.

What makes the season 3 so special is the idea of bringing the monsters back into the real world. The characters might be felt a little bit detached, yet they somehow do not let the strength of the season down. Hopper’s character is the most unpredictable one in this season. He partly shows interest in taking one step ahead with Joyce which sounds ridiculous. However, what he actually feels about El is heartwarming.

The CGIs are improved and there are many more hand-tightening moments. The first season had a big twist when we got to know that Will is alive. The second season had that moment too when the secret of the mind flayer revealed. The recent season lacks that twisty moment. But, the season itself can be a game-changer for the next one because of the open ending. 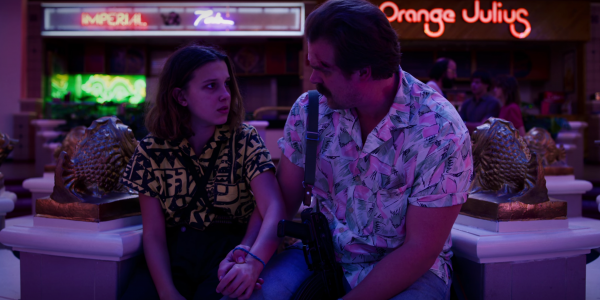 “Stranger Things (Season 3)” offers everything which it had been offering from the previous seasons except the big twisty moments. The Duffer Brothers have succeeded once again in creating 80’s fun, scares and mystery. The last episode is by far the best one till now. It literally puts a high emotional note while giving farewell to everyone.

Moreover, “Stranger Things” proved itself to be a fluent exhibitor in keeping things interesting from start to finish. It oddly offers every cliché in so appetitive manner that one’s issues are defeated by the joyous moments. This is the character-driven summer entertainer where we all get a chance to enjoy the teenage nostalgia for sure!