The Duffer Brothers’ – Matt & Rosss – tribute to 80s American suburbs, Steven Spielberg, John Carpenter, Stephen King, and every other sweetly resonant elements of the era’s pop culture through Netflix’s sci-fi show Stranger Things surprised us by its unanticipated arrival, eventually becoming a breakout hit (premiered in July 2016). It was solidly entertaining mega-pastiche of the 80s sci-fi and horror genre tropes, enlivened by an adorable ensemble of pre-teens and the subsequent, irresistible emotional quotient. The show proudly follows the archetypes, exploits nostalgic elements created by the American genre masters’, for better and worse. Even with all the mimicking and familiarity, Stranger Things was filled with great gusto that it succeeds in its mission: to be the cinematic equivalent of an all-dessert meal. But naturally the hype machine put forth a big spotlight on the season 2, so much that we may have dreaded the possibility of reading how the much-expected follow-up, thrums more with kitsch and less on emotions. Thankfully, our misgivings are extinguished right from the start, as the 2nd season smoothly and organically builds up the crisis that would come to plague the beloved denizens of Hawkins, Indiana. 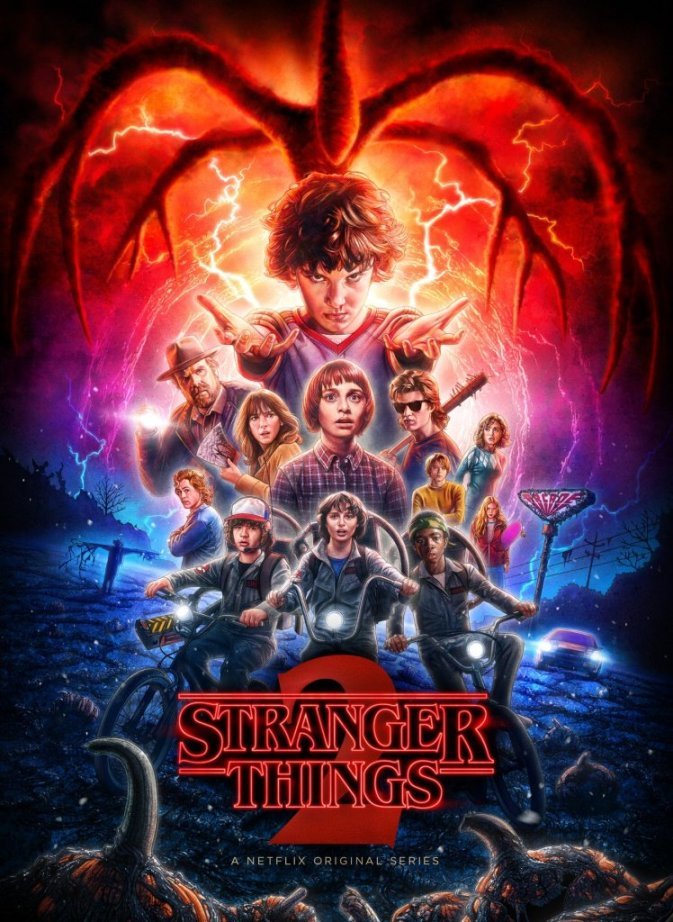 Season 1 right off the bat jumped into a crisis, a life-threatening catastrophe. This time around the Duffer Brothers, relying more on the talents of their young cast, gives enough room for the characters to develop an inner-life before setting out to annihilate the inter-dimensional shadow-monster. The narrative commences nearly a year after the events of the 1st season. The small-town residents who witnessed the stranger things continue to maintain an unsettling truce with the hardened government scientists. Most of them suffer from PTSD, especially the 13 year old survivor Will Byers (Noah Schnapp) who keeps seeing the devastation of ‘Upside Down’. However, he hangs out full-time with his buddies Mike (Finn Wolfhard), Lucas (Caleb McLaughlin), and Dustin (Gaten Matarazzo) at the local video arcade. The secretive Hawkins lab is now run by genial-looking Dr. Owens (‘Alien’ fame Paul Reiser) who runs some tests on Will and remarks to Will’s fiercely protective mother Joyce Byers (Winona Ryder) that the trauma will probably get worse before the possibility of full recovery.

Mike is yearning for Eleven (Millie Brown), calling her over the walkies-talkie for over 353 days. Grief-struck police Chief Jim Hopper (David Harbour) interestingly relies less on booze due to the secret guest staying at his ramshackle cabin in the woods. ‘Dinner first, then Dessert always’, says Chief Hopper in a nurturing voice to the fugitive Eleven who has broadened her vocabulary range yet stuck within the routine of TV shows and frozen waffles, Eggos. Hopper keeps the teen with telekinetic powers safe and warm, but since there’s no promise for a bright future, Eleven is unable to move away from her tortured past. Meanwhile, Mike’s elder sister Nancy (Natalia Dyer) is downed with feelings of guilt over her best friend Barb’s death. She’s once again caught between the two good-hearted high school boys, Steve (Joe Keery) – current boyfriend — and Jonathan (Charlie Heaton). There’s also two exciting newcomers: Bob (Sean Astin), Joyce’ super-nice boyfriend; and Maxine (Sadie Sink), the swaggering, red-haired tween whom the wilful Dustin and Lucas wants to be part of their team and whom Mike rebuffs, telling that all roles are filled in their party. The intriguing opening set-up in episode 1 (Mad Max) also introduces us to Kali aka Eight (Linnea Berthelsen), the predecessor of Eleven at Hawkins’ lab. The better-constructed main story arc begins when the chief players realize Will’s vision of Upside down is not just a case of PTSD, but a kind of premonition to the nefarious alien monster’s upcoming onslaught.

The story-line of the season 2 is as simple as season 1 (if not overly derivative). The magic or charm lies in how the Duffer Brothers take all those sci-fi kitsch and transcends into disparately distinct moments. The creators pillage from every good or decent American genre movies of the 80s, but they all blend it in a very intriguing manner. Further powered by graceful characterizations and splendid performers, the derived material looks refreshing. As I mentioned, the characters are pretty much built upon Spielberg-ian archetypes. But the best thing is that the characters blossom in a way that’s organic and totally relatable, both in terms of writing and performances. Lucas and Dustin – the alleged comic-relief side-kicks — occupy a more prominent place in this season. We see them bantering with parents, standing up their own ground against bullies, and more of the boys’ tender side. Even when the story-beats don’t go anywhere interesting these young supporting players totally drive our attention. The splitting-up of the characters in season 2 was also superbly realized. I particularly liked the teaming of Dustin and school’s heartthrob Steve Harrington (Joe Keery). At that point in the story, these two characters are almost cast-off to the periphery, yet they turn things with the ‘Dart-hunting’ scenario. As the duo walk by the tracks, scattering the bait, and addressing the whole awkwardness of talking to girls, the scene almost resonates with nostalgic tint of Stand by Me. Sean Astin’s character was another surprising package. He’s just introduced as the man-child who probably may be first casualty of the alien monster. But with Sean channeling in his inner-Sam, the character is much more emotionally resonant (so much that we can forgive him for the very bad advice to Will). For a show whose macro plot only promises to deliver big, adrenaline-rushing set-pieces, such relentless attention to beautiful, micro moments are a welcome respite and it diffuses multitude of fascinating dimensions. 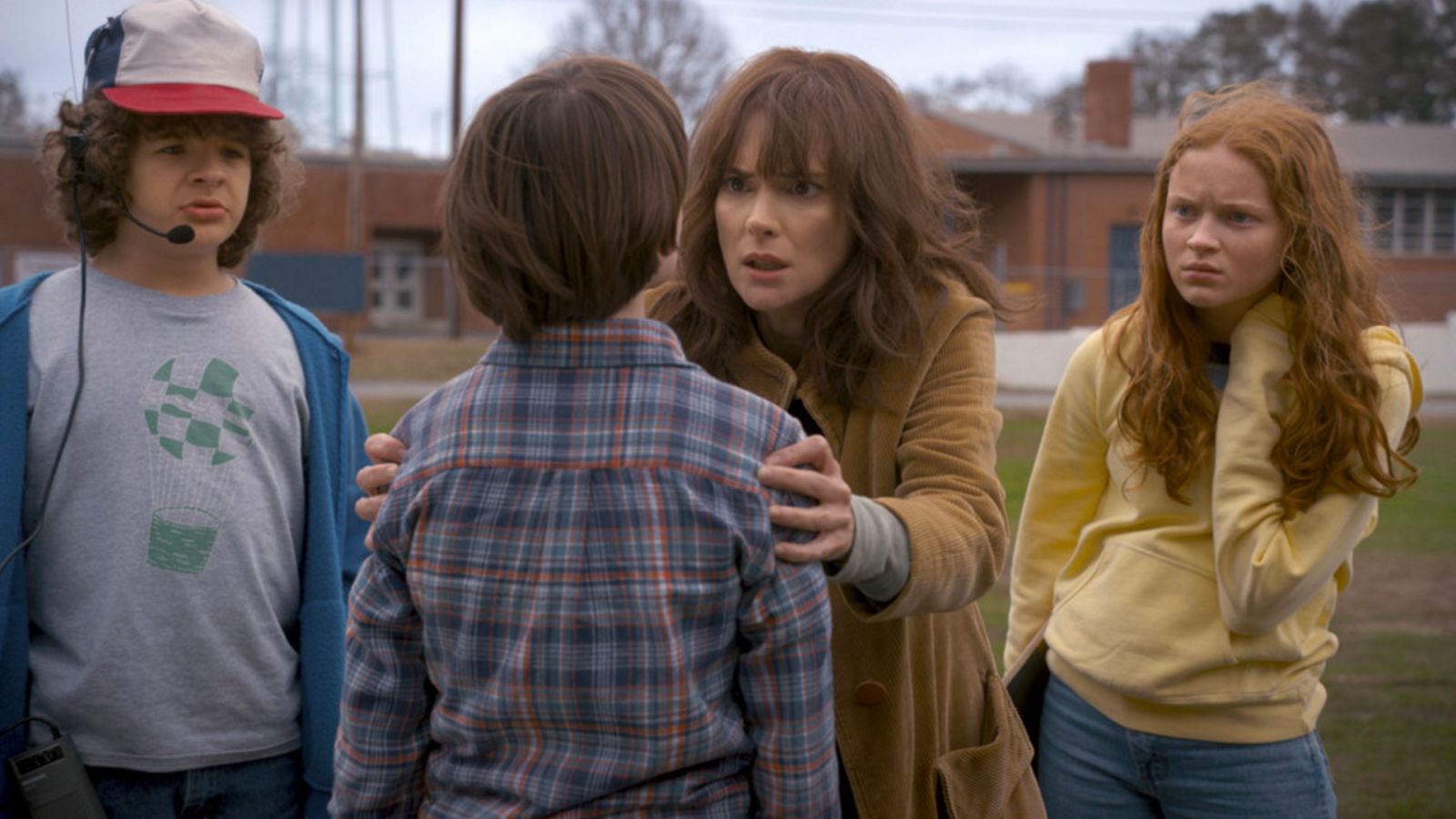 Of course, not all of the characters in the incredible ensemble remain much more than a narrative device. The Duffer Brothers take a bold decision by giving young Millie Brown to shoulder an entire episode (the 7th one) which she does pretty well. On paper, Eleven’s encounter with Eight sounds pretty interesting. But the execution didn’t go beyond the surface; making Eight only a dispensable device for propelling Eleven towards taking the selfless decision (Maxine’s bullying brother Billy is a much less important device in the season). The creators’ penchant for shuffling-up some of the 1st season’s memorable moments works most of the times, with only few scenarios that turn out as a frustrating iteration of the old ideas. The moment of epiphany related to Christmas Lights’ at Joyce house is replaced with similarly revelatory sketches that snakes through the house. This scene (that involves the town’s map) looks like a fine nod to small-town-set works of Stephen King, whose menacing otherworldly or supernatural villains quite often fester deep beneath the idyllic surface of quaint towns.

The editing is more stylish and it was a delight watching how the scenes are knitted together or perfectly juxtaposed at key moments (for example, when Dustin and co sets up a trap, while the hazmat-suited men walk into a trap or the way El’s bus journeys are carefully intertwined). For the most part, the show creators and directors go for ‘less is more’ approach when it comes to action set-pieces, savoring the mega-budget spectacular visual effects for the ending. In the end the season 2 of Stranger Things bypasses most of the traditional pitfalls of a sequel. Once again the most sensational moments of the series happens when the characters branch-out, organically evolve or deepen, so as to eventually strengthen the dynamics of the familiar plot. The monster the boys and girls fight in the cinematic universe may be different from the monsters we fight in our ultra-realistic, unmagical world. But the prospect of watching these outcasts, nerds and geeks winning over myriad forms of preternatural evil dispels some of the existential gloom. Stranger Things 2 can be bestowed with all the superlative adjectives its predecessor gained. At the same time, it’s also one of the many safer and warmer cocoons for us to retreat now and then, from the true, omnipresent ‘Upside Down’, i.e., the hard-hitting reality. It’s absolutely tubular!