Episodic TV is the norm, but what if whole movies are released as episodes? This is the exact formula used by Leigh Janiak and the distributor of the Fear Street series- Netflix. To remain successful and ensure that the audiences don’t feel like they are seeing the same thing that was released just 168 hours ago is quite a challenge. Especially if the product is being presented as a feature film, as is the case with the Fear Street film series. Fear Street Part Two: 1978 does well here. It is a not so pretty color war, that has the creeps, thrills, and chills

Fear Street 2-1978 takes the story further (works as a sequel) with an examination of events in the past (works as a prequel). This film does not work as a cash grab, and plays its part of the second in a three-part installment i.e. it serves as the bridge between the first part and the third part. The seeds are sown for a gripping finale set to take place 308-years in the past.

While the first installment paid homage to slasher horror at the mall and the iconic Friday the 13th film series imagery, Fear Street Part 2, too, continues in the same vein.

It is set at a camp. Now you must be thinking, horror movie, slasher film, set at a camp. You may have a particular film in mind. Okay. It’s nothing like that film. Camp Nightwing, a place where young adults of the dueling towns of Sunnyvale and Shadyside congregate, serves as the setting for Fear Street 2-1978. The long-standing feud makes way for camp rivalries, based on the folklore and unfortunate events surrounding one town. Based on the words, it seems imminent that tragedy will strike. It does, with a night of tradition in one sense, becoming a night of tradition in a not-so-nice manner. 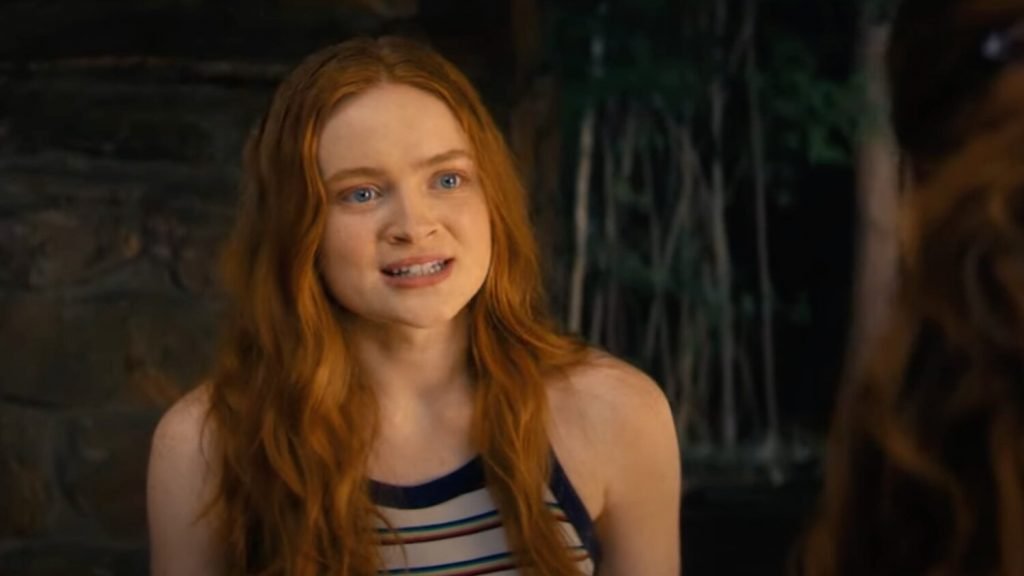 The film focuses primarily on sisters Cindy and Ziggy Berman (Stranger Things’ Sadie Sink), Alice, Tommy Slater, and Nick Goode. These five characters play central roles. And it is largely due to their arcs that it isn’t a mindless slasher film. It is because of these characters that Fear Street 2-1978 survives as it (attempts to) delves into the backstory of why what is happening is happening. This is what differentiates it from the first film and helps it shine. As with second installments, the audiences come prepared with what to expect.

Now, with the second film being somewhat spoiled by one line in the first film, there was a challenge for the makers to keep it intriguing. Viewers of the first film know who survives. Also, those that jump on the bandwagon directly from the second film will also know the identity of the survivor. Or is that what the director, Janiak, wants us to think? So how does it remain intriguing?

What works here is that Janiak along with co-writers Zack Olkewicz and Phil Graziadei opted to further the detective element of the saga that saw its seeds sown at the end of Fear Street-1994. This helps the film expand further into R. L. Stine’s universe and the Sarah Fier story to give the audience some food for thought ahead of the final act. But what filmmaking elements help this survive and elevate the story?

As mentioned earlier, Fear Street 2-1978 is set at a camp. Aided with the viewer’s understanding of the use of background scores, the filmmaker, through Marco Beltrami and Brandon Roberts’ score, conveys to us that Camp Nightwing has a sinister feel around it. Jess Royal’s set design featuring wooden flooring, darkish corridors with a hint of sunlight illuminating the windows, captured by Caleb Heymann’s camera, helps build the feel that impending doom is on its way. This, combined with the randomly appearing woman, a mysterious book, and sudden descent into madness, sets the tone for what we soon learn is a few hours of mayhem with a Jason Voorheeseque being stomping along the campgrounds.

The initial events of the film, which introduce us to the lead characters, leave us with a lot of unanswered questions that make us keep our eyes peeled. In turn, this provokes viewers to remain alert and pick up on any flash of light on screen or crunch of a twig. Horror films are filled with these, right?

Related to Fear Street – Horror Movies Then Vs Now: How Have Filmmakers Managed To Get You Cowering In Fear In The 21st Century

As a horror film, Fear Street 2 succeeds in keeping the audience engaged. Also, it successfully finds the balance between showing the gore quite explicitly on screen and not dragging it to the point of making viewers sick and letting them deviate from the questions it put so much effort into placing in our minds before the mayhem ensued.

Even in the mayhem, certain individuals seem curious about what’s really happening. Horror aficionados will know that this is the director’s attempt to establish said characters as the ones to keep your eyes on as they will drive the story forward. The cuts joining the different narratives before they converge helps Janiak use this to play with the viewers and, in turn, remind us about the innocent lives that have no idea of what horror is about to be unleashed in their midst.

These work well to keep viewers hooked on. A film that was not engaging enough may have provoked them to use their understanding of Netflix to get all they need to be up to speed for the last part in the ‘previously on-insert show/movie name’, before the next edition.

All-in-all, this retro slasher thriller film proves to be quite a good standalone film with references to the first film and hints of what the third may have in store.

While I spoke about the murder scenes not being long and drawn out, it’s quite disappointing to see that Janiak didn’t deviate from the formula and sacrifice one of the lead characters in a swift fashion. It seemed established that the side players would be eliminated swiftly and the main players would… you have seen enough films of this type to know what I’m getting at right?

On the whole, Fear Street 2-1978 is another one of Netflix’s tried and tested formula of offerings set in the 70 and 80s that manages to click amongst the present-day audience. Furthermore, it doesn’t drag, and in fact, you may not even notice the fact that a certain amount of time has elapsed. I was pleasantly surprised to see that almost an hour had gone by when the mouse shook. It is crisp, creepy, and is filled with teenage shenanigans. However, it does what it needs to do the most. Drive the story of Sarah Fier forward and keep camp horror fans intrigued.

Runner Runner: Be Ready to Problems