Shohei Imamura, a very politically conscious film-maker and one of the key figures of Japanese New Wave, once said: “I am interested in the relationship of the lower part of the human body and the lower part of the social structure on which the reality of daily Japanese life obstinately supports itself.” The characters in Imamura’s cloistered world remain outside the typical parameters of ‘Japaneseness’ – the unique decorum that allegedly defines what it means to be Japanese. By ‘lower part of social structure’, Imamura means the impoverished and disenfranchised who are forced to live by instinct, and very often pigeonholed into the ‘uncivilized’ category. Renowned film critic and author Donald Richie sharply delineates the perfectly contradictory nature of Imamura’s cinema, compared to the subject of other Japanese masters like Yasujiro Ozu, Akira Kurosawa, Kenji Mizoguchi, Mikio Naruse: “These people [Imamura’s characters], always from the so-called lower classes, do not know the meaning of fidelity or loyalty. They are completely natural and to the extent ‘uncivilized’ if civilization means (as it does) a removal from the natural. They are selfish, lusty, amoral, innocent, and natural and all of the vitality of Japan comes from their numbers. Furthermore, Mr. Richie terms the lionized middle class population (of post-war Japan) in Ozu’s films as the ‘official’ version (‘the way Japanese society likes to see itself’), whereas Imamura’s films is supposedly exhibiting the ‘real’ or the rowdier version (one interesting tidbit here is that after graduation, Imamura joined Shochiku studio as an assistant director in 1951, and worked under Ozu). Although the provocatively titled Pigs and Battleships (‘Buta to gunkan’, 1961) was Imamura’s fifth feature film, it was definitely the director’s breakthrough film.

It also firmly expressed the film-maker’s trademark thematic concerns (a focus on society’s undesirables) mounted with precise anthropological eye (and entomological to an extent). Moreover, starting from Pigs and Battleships Imamura’s cinema possessesed profound streak of humanism which distinguished him from other Japanese avant-garde and new wave masters of the era (like Yoshishige Yoshida, Hiroshi Teshigahara, and Nagisa Oshima). Criterion clubbed together three of Imamura’s formative 60s films – Pigs and Battleships, The Insect Woman (1963), and Intentions of Murder (1964) – and released it under the title ‘Pigs, Pimps, and Prostitutes’, which all concentrated on the rapid social, economic, and cultural changes inflicted upon the poor in the post-World War II America-occupied Japanese society. 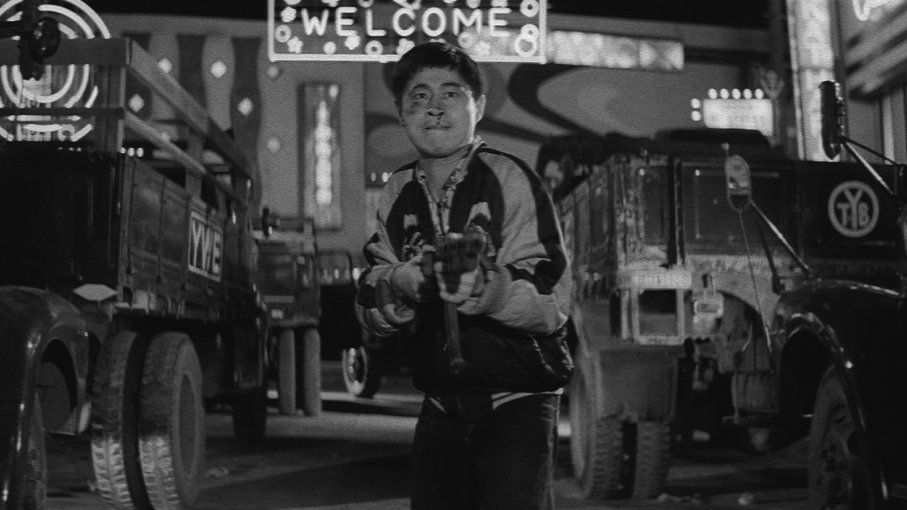 Pigs and Battleships (penned by screenwriter Hisashi Yamauchi) is an uneven melodrama but at the same time an intellectually entertaining dark comedy. It doesn’t have the metaphysical, ethnographic-documentary tone Imamura experimented with The Pornographers (1966) & A Man Vanishes (1967), and which he used to perfection in later-era masterpieces like Vengeance Is Mine (1979) and The Ballad of Narayama (1983). The opening credits of Pigs and Battleships swiftly conveys the metaphorical representation of ‘pigs’ – the parasitic Japanese gangsters who are no better than hogs in the pen – and ‘battleships’ – the glinting phallus symbols floating in the sea, whose foreign (American) occupants ravage the Japanese souls to satisfy their pleasures. The protagonist of the film is an amorous, runty, small-time hustler Kinta (Hiroyuki Nagato). He works for an ailing yakuza under-boss, who is part of a larger gang running the pig farming business. Kinta lives in a shack near the coast of Yokosuka that’s crowded with the American battleships. The lingering presence of Americans naturally boosts the black-market and promotes prostitution near the slums. Kinta’s bosses wear costly suits, but still they too fight for scraps dropped from the occupiers’ table. When we first see Kinta he lures a boorish, drunken American sailor into the vibrant yet lurid quarters of Yokosuka, tempting him with scantily-clad women from the whorehouses. The swine business, however, Kinta believes is his ticket to the big time as he is promised a fat bonus once the hogs are sold.

Kinta is also promised with a new position in the gang, if he takes a murder rap for the boss, when the police find the body of a recently killed gangster. Kinta’s smart and tenacious girlfriend Haruko (Jitsuko Yoshimura), however, perfectly understands Kinta’s shortcomings and how his lofty plans could easily back-fire. Haruko’s mother and elder sister cajole her to live the comfortably materialistic life of a kept woman, but she fiercely neglects their counsel out of her love for Kinta, which actually puts the girl to face some hellish experiences. As the gangsters leech on local people and turn the community into their own sty, Haruko, now pregnant with Kinta’s child, hopes to escape from the clutches of the city with her boyfriend. The alternative to hustling, like a factory job, naturally doesn’t sit well with Kinta. And eventually the hapless guy is burdened with things (in a literal manner too) he couldn’t handle. 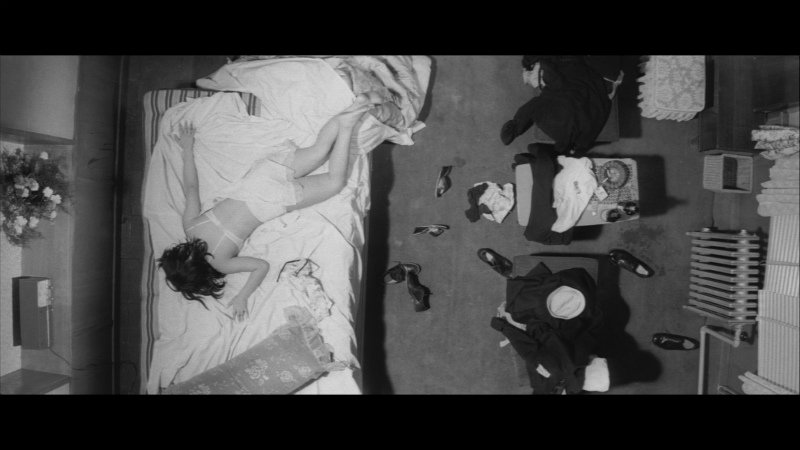 Couple of consistent elements in Imamura’s filmography are: his refusal to idealize or romanticize the poor; and the presence of perpetually battered yet hardheaded heroines who are world apart from the traditional, self-sacrificing  maidens. The other recognizable Imamura hallmark that could be found in its nascent form in ‘Pigs and Battleships’ is the portrayal of intense sexual energy, which also breaks the taboos associated with modern female sexuality. With Pigs and Battleships, director Imamura had started to master the art of juggling between tragic and comic. The film might be little imbalanced, especially in the way the farcical and melodramatic dimensions of the narrative are handled. The overt symbolism also repeatedly underlines the harsh reminders of cultural and social confusion, unleashed by discourteous Americans and their corrupted Japanese counterparts. Yet what makes the movie a daring venture is Imamura’s kinetic film-making style (also thanks to the meticulously groomed shots of cinematographer Shinsaku Himeda).

Related to ‘Pigs and Battleships’ —The Eel [1997]: A Fascinating Tale of Social Isolation and    Redemption

Some of the tell-tale aesthetic trademark signs – astounding tracking shots, god’s eye point-of-view, etc – are apparent in this early work of Imamura. Much of the innovative shots conjure an immediate emotional reaction. This could be best explained through the scene when drunken Haruko finds herself in a hotel room with three American GIs. Imamura communicates the young woman’s entrapment through the god’s eye shot and simply spins the camera in a dizzying manner to joltingly impart the humiliation and agony she was subjected to. The other intriguingly staged sequence is the riotous ‘pig parade’ as poetic justice is served to the outrageously self-interested yakuza men. Despite employing fascinating metaphors to unveil the lamentable human failures of post-war Japanese society, Pigs and Battleships is relentlessly hopeful and humanistic. Imamura does wonders with Haruko’s narrative arc, who refuses to content herself with despair or wallow in impassivity. She rises above shame and the impulse to serve, which is brilliantly evoked by Yoshimura’s memorable icy calm and dour exterior. Altogether, Pigs and Battleships (108 minutes) is a bit raucous yet an ideal introductory point to start perceiving the formally stimulating and politically engaged works of Shohei Imamura.