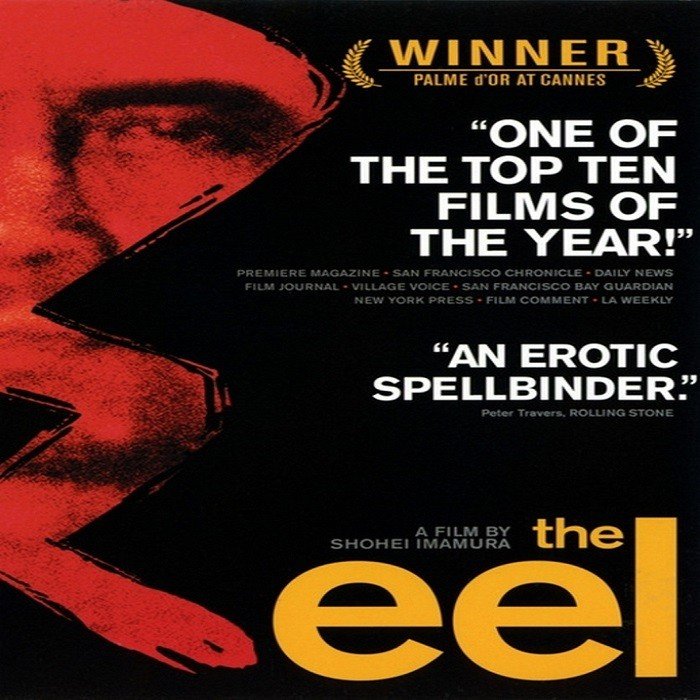 Pimps, prostitutes, pornographers, murderers, criminals, uncompassionate individuals, and other inelegant peripheral members of society are the primary subjects in Japanese master Shohei Imamura’s anthropological exploration of alienated society. “I am interested in the relationship of the lower part of the human body and the lower part of the social structure on which the reality of daily Japanese life supports itself” were the words of Imamura that acutely explains his chaotic world view and revelatory, morbid themes. Many of his works, at the time of its release bewildered general audience and critics. The primal, bawdy human behavior of Imamura’s characters weren’t as openly received as the esteemed Samurai characters or placid, salary-men characters of the era. With age, Imamura’s works gained relevant praise and his powerful, idiosyncratic vision got celebrated. In the four and a half decade film career, Imamura had made two significant comebacks: “Vengeance Is Mine” (1979) – his first feature film in 11 years (he only made documentaries during the 70’s, due to recession in Japanese film industry); “The Eel” (‘Unagi’, 1997) – Palme d’Or award winning feature he made after a 8 year long gap (after “Black Rain”, 1989). Only few other great film-makers in the history of cinema were able to make such triumphant comebacks.

“The Eel” opens with the film-maker’s trademark extreme long shot, depicting the frenzied capitalist surroundings. The year is 1988 and we get the first look at corporate employee Yamashita Takuro (Koji Yakusho), sitting in front of a computer, in a glossy office. It makes us wonder whether a salary-man is finally going to be Immamura’s protagonist. Despite the calm demeanor of the white collar protagonist, we soon witness him embrace two of basic human emotions – jealousy and rage. While traveling in the crowded metro rail, Yamashita reads one of the many anonymous letters, warning him about his wife’s infidelity. The letter read in woman’s voice (why?) informs him and us that a strange man visits Yamashita’s home, while he goes for all-night fishing trip. This anonymous person also states that this will be the last letter. Yamashita gets ready for the fishing trip upon returning home. He upholds his placid nature, while the wife cheerily prepares a bento (home-packed meal) and goes away for the fishing trip. 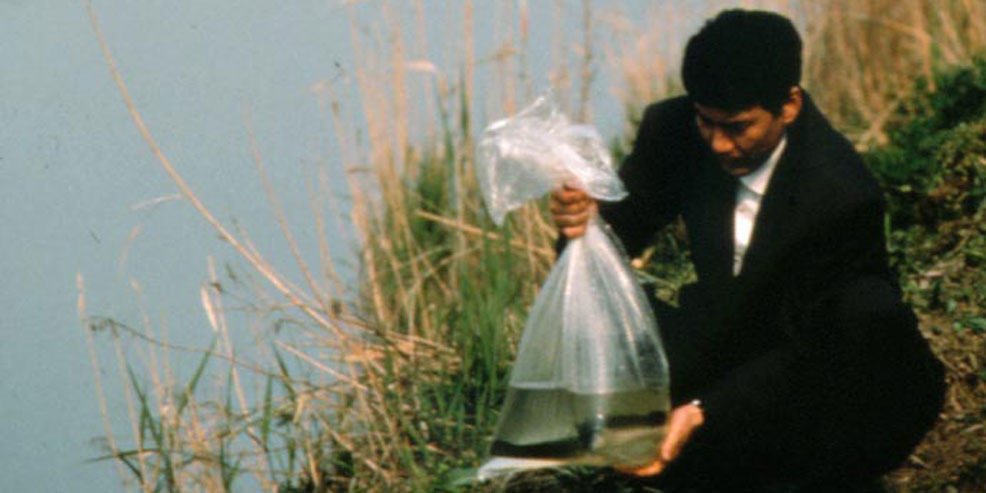 Yamashita cuts short his trip and decides to return home early in the night. He finds a white sedan, parked in front of his house and slowly peers into the bedroom window to find his wife in bed with a stranger. Imamura’s camera isn’t just focused on the discomfited looks of Yamashita; it also captures the enthusiastic sexual involvement of his wife. Her enjoyment offers punishing, humiliating blow to Yamashita’s psyche. Caught in a daze, he slowly walks into bedroom, knife in hand, and first stabs the stranger. The man runs away in fear, shouting ‘murder’. Yamashita’s rage explodes as he repeatedly stabs her. In the subsequent, near-surrealistic sequence, he rides a bicycle to the local precinct. Covered in blood, Yamashita calmly turns himself in and gives away the murder weapon. The narrative cuts to eight years later, when Yamashita is set to be released on a two year probation. Upon release, the prison officers hand over Yamashita’s pet eel. His alienated nature is pretty evident as he says the eel listens to him.

He is relocated to a quiet rural town, Sawara, placed under the care of local parole officer and priest named Nakajima (Fujio Tokita). The priest is the only one aware of Yamashita’s past and helps him set up a barber shop (he learned to be a barber inside the prison) in an abandoned building. In the desolate town, Yamashita soon attains a circle of quirky friends/customers. One day, while fishing in the nearby pond, Yamashita saves the life of a woman (bearing some resemblance to his wife) attempting to commit suicide. The woman’s name is Keiko (Misa Shimizu), who has her own troubling past. Soon, Keiko arrives to barbershop with the parole officer’s wife (Mitsuko Baisho) to persuade Yamashita to hire her as an assistant. Yamashita reluctantly accepts and keeps her at arm’s length. The possibility of a normalcy opens up to Yamashita as he gradually develops a non-sexual bond with Keiko. However, both of their past troubles comes back to haunt and test their bond. There’s also question of whether Yamashita had repented for his crimes. Will he be robbed of the emotional awakening, only to be ensnared like the lone eel?

“The Eel” has little of the beguiling corrosive tone of Imamura’s greatest works. It is not one of my top five favorite works of the director (“Vengeance is Mine”, “The Insect Woman”, “Profound Desires of the Gods”, “Ballad of Narayama”, and “Pigs and Battleships” are my personal favorites). But, there are enough off-beat, idiosyncratic touches in the film that could only be pulled off by the Japanese master. From the plot description, some might come to conclusion that it is a light-hearted tale of two mutually attracted individuals seeking redemption. Imamura and his co-writer/son Daisuke Tengan (based on the novel by Akira Yoshimura) puts Yamashita on his path to contentment, but never keeps away or glosses over the darker, inner conflicts, grinding the character.

Yamashita is presented in an affectionate manner and Imamura allows the viewers to empathize with his plight. We witness him brutally killing his wife on-screen, then his whole prison experience is left off, and he arrives back into the society with his polite, apologetic manner. The reason we are able to empathize with him, forgetting or less bothered about his extreme reactions in the past gives ample food for thought. In fact, Imamura never directly penetrates into Yamashita’s thoughts. He rather employs extensive, recurrent symbolism to study the protagonist’s psyche. For example, the director repeatedly uses the color ‘red’ to signify Yamashita’s repressed guilt. In the initial scenes, when he looks at the street lamp after finding out a strange white sedan, parked in front of his house, the lamp turns red. While the red could also indicate his rage, it is the guilt of inability to (sexually) satisfy his wife that is devouring him. Later, when Keiko is introduced she is cloaked in a red dress and Yamashita takes a long look at her, while she passes on the street. The color of her dress reminds him of the past crime from which he desperately wants to be set free. The jealous parolee and garbage man wears a red pant and posts warning message on the shop’s window, emphasizing some words in a red circle. 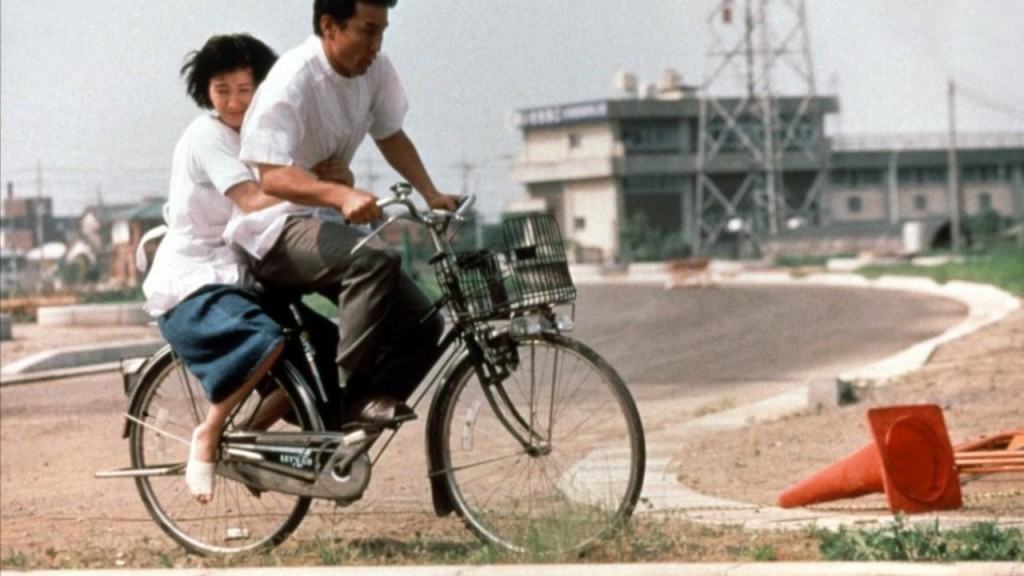 The central character’s broken psyche and inability to communicate is reflected through his attachment with pet eel. The eel had remained in the restricted surrounding of a prison pond and later placed over in a small fish tank. The physical confinement of the eel is redundantly contemplated with the containment of Yamashita’s psyche. When looking into eel’s tank, Yamashita has the hallucinations that confirm his worst fears (about the murder).  The eel’s fate in the final frames once again symbolizes his transformation. The parallels to Yamashita’s actions towards the end and eel’s nature are plainly explained in the final scenes (“Finally I’ve become like you. I’ll raise a kid by some unknown father”). More than the symbolization of eel, what I found subtler in Imamura’s treatment is the garbage man character, Takasaki. The whole conversation Yamashita has with the garbage man is symbolic in nature. Takasaki could be treated as representation of the protagonist’s insecurities, guilt and incendiary doubts. The garbage man passes bawdy remarks, which in a way seems to be the truth Yamashita wants to conceal. Yamashita shows little reproach for his murderous act. He tenaciously believes that the betrayal of love on the wife’s behalf is the reason for killing her. But his inner conscience broods over the possibility of guilt, derived from his sterile nature (infertility) and those inner thoughts are very well reflected in the exchange with Takasaki.

Director Imamura breaks off the serious tone of his narrative through small comic delights, in the form of quirky characters surrounding Yamashita (one young guy makes a crop circle and ludicrous device to call upon UFOs). The final brawl is diffused with a fine dose of absurdity to derive light humor. Along with affectionate character treatment, such light touches instill a marvelous humane tone to the narrative. Imamura’s directorial approach in “Unagi” is more traditional than what we witnessed in explosive works like “Vengeance is Mine”, where he got (and took us) dangerously close to the central serial killer character Iwao Enokizu. Here Yamashita is mostly observed from a distance, in mid and wide shots.

Legendary Japanese filmmaker Shohei Imamura’s “The Eel” aka “Unagi” (117 minutes) is an oddly touching, thought provoking drama about two wounded souls. Despite a predictable narrative, it remains entrancing due to Imamura’s fine juxtaposition of gentle and vicious human nature.

The BFG [2016]: Spielberg's Territory but not Spielberg Enough