“I saw a woman, who thought no one was waiting for her,” announces the narrator of ‘About Endlessness.’ This, at a train station, while showing us a shot of a family receiving another woman, warmly. The train stops, the said woman gets out, looks around, and takes a seat at a bench nearby. The train leaves the station. In a moment, at this deserted station, a man comes running, hugs her, and collects her; they leave.

This is one in some 30 vignettes that make this Swedish film written and directed by Roy Andersson. Most of them use the “I saw a…” starting, without any context as such. Andersson, who has made six features, won the Golden Lion at Venice in 2014. ‘A Pigeon Sat on a Branch Reflecting on Existence’ (2014) was similar but did have a plot. It tried to tie up loose ends to some extent. ‘About Endlessness,’ whose Swedish title is ‘Om det oändliga,’ went to Venice, too, in 2019.

Related to About Endlessness – PATERSON [2016]: A POETIC CELEBRATION OF THE MUNDANE

Two people are floating across the sky when the film starts. It will come back to these two but not before showing us the title card and a few more people. The first one is that of a middle-aged couple, sitting atop a hill getting a view of the town and a few birds fly in their ‘v’ at a distance. After 45 seconds of watching, the woman says, “It is September already.” The man says, “Mm…,” and the camera rests there for almost 20 seconds after this exchange, and moves on to the next. 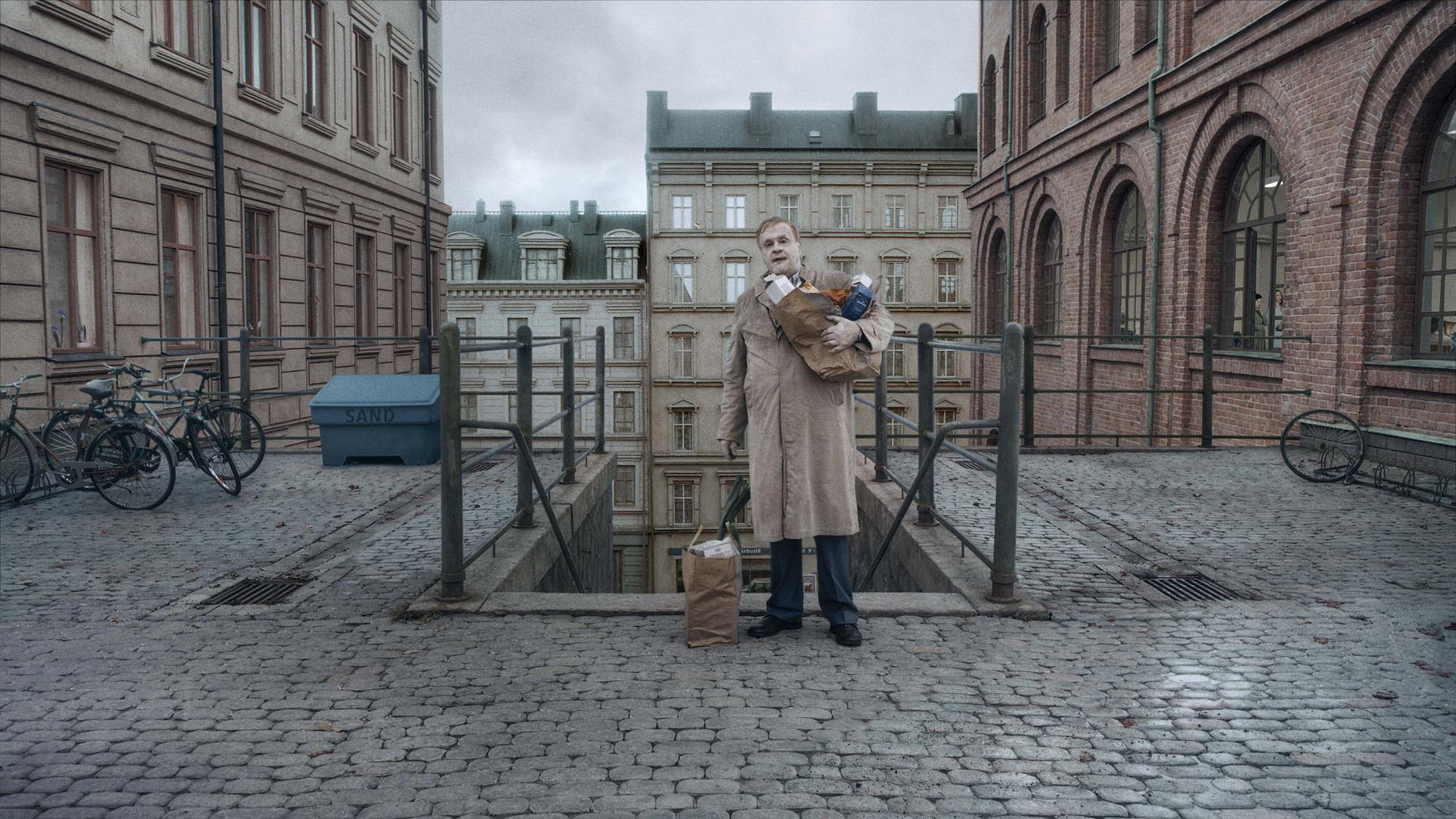 The mundane seems to interest Andersson. He has Adolf Hitler in one of the scenes too. So, there is an obvious fascination with the majestic. The “floaters” are passing by the remains of what was once a thriving city. In ‘Pigeon’ and ‘Endlessness,’ he undoubtedly fits the artsy trope with his grey palette and philosophical inquiry.

The circumstances in this film show how the human condition grapples with fixing itself and does a miserable job at it. There is no success in any of the stories, or happiness even. The woman is already sad that she was not received in time and the other woman that it is fall. The melancholy and morbidity aside, we, as human beings are incapable of doing anything substantial. In our situation, the more we try to do the more we worsen it. That’s what Andersson seems to suggest – i.e we becoming unhappy with ourselves.

Take the second one, for instance. The narrator says she “saw a man, who wanted to surprise his wife with a nice dinner.” He has groceries in hand but stops to tell us about an incident. He tried to greet somebody he knew from school and that person ignored him. The only explanation he can think of for this is that he was mean to the other man in school. As he narrates this to us, the other man walks by. Our man greets him, the other man walks off. Maybe he has: not heard him, is a figment of his imagination, or did not want to get involved with this chap again. Our chap, however, certainly feels guilt.

Instances like these are so endless in today’s life that questions like these are a constant: Why did they not… accept my request? Follow me back? Like my picture or story or status or tweet? Comment or share or retweet? Locating answers within ourselves is the easiest thing we can do. Tracing it back to our last exchange or encounter we had with the said person in question is the most obvious thing we do. I do not think they qualify for guilt but doubt they do. 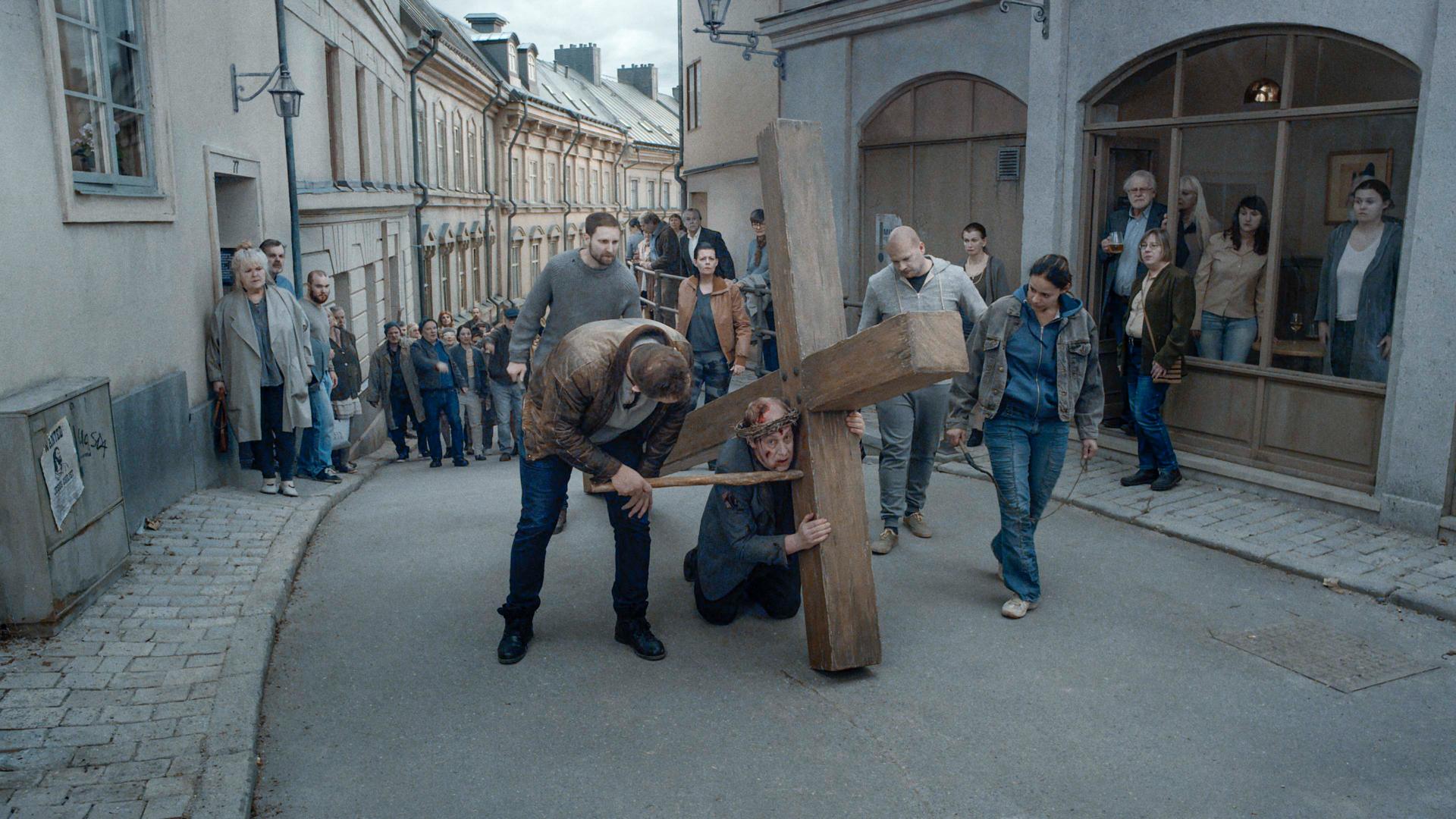 One of the most violent sequences is not Hitler’s but of a man who is being beaten and asked to walk holding a wooden cross early on in the film. He is bleeding and asking what wrong he has done. But there are no answers and he is being crucified. Our narrator is missing from this whole scenario, too. In most of the narrations, she is not describing the scene as much as introducing it. What happens in the sketch is adding to or addressing her narration in imaginative yet ordinary ways.

Gergely Pálos is the cinematographer who has mostly held his camera still throughout the film. This has helped tell this tale as distantly and flexibly as possible. ‘About Endlessness’ is running in US cinemas. With a runtime of mere 78 minutes, Andersson has shown how the possibilities of a film can be numerous and how simple philosophy can actually be.

“I saw a woman, a communications manager, incapable of feeling shame,” is, in my opinion, the best of them all. The woman overlooking the town through her tall glass windows turns to the camera almost as if she has heard the narrator and gives her and all of us a stare and goes back to what she was doing. All in less than a minute. She seems to say, mind your own business!

How Nayattu (2021) Is An Unrealistic and Misleading Anti-Dalit Movie