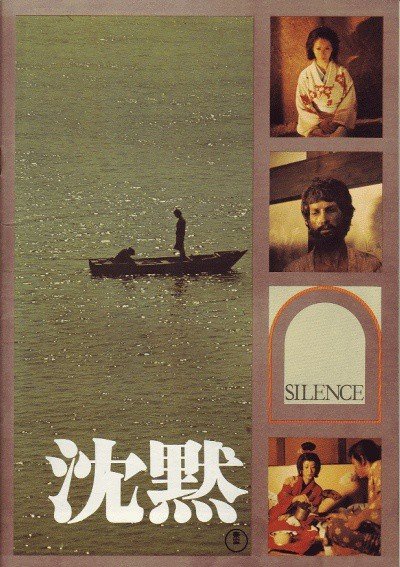 Adapted from renowned Japanese novelist Shusaku Endo’s 1966 novel, Masahiro Shinoda’s The Silence (aka “Chinmoku”, 1971) is set in 17th Century Japan, when the Japanese shoguns banned the worshiping of Christian God. The Jesuit missionaries and the Japanese followers of the religion (known as ‘Kakure Kirishitan’ or ‘Hidden Christians’) were persecuted and tortured throughout the century. In Today’s Japan, Christianity is a minority religion. Novelist Endo was a catholic and was said to have faced some religious discrimination in Japan. He was also a bit of outsider to Japanese culture. At the age of ten, he moved with his divorced, catholic mother to Japan from Manchuria. After the end of World War II, Endo went to study at Paris. There he faced some racial discrimination. Endo also suffered from tuberculosis. All these personal sufferings is said to have highly reflected in his novel ‘Chinmoku’. The novel is partly written in the form of a letter; a letter written by a persecuted Jesuit named Rodrigues.

Shinoda’s movie offers a prologue to track down the origin points of the violent cultural conflict of the particular era in Japan. The 1534 was one of important years for Christianity. In that year, foundation of the Society of Jesus decided to quell the rise of Protestantism (in Europe) and to spread Catholic teachings all over the world. Later, the Spanish and Portuguese missionaries landed in Japan and until late 16th century, the religion was tolerated and the works of missionaries were considered harmless. When the impoverished and oppressed mass number of people started to embrace the religion more than the shogunate structure, Christianity was banned. The missionaries and stubborn Japanese followers were burnt at stake and subjected to various forms of torture. The film’s narrative is set in 1638, and it’s been more than four decade since Christianity was banned. The prolonged persecution efforts by authorities have kept the Japanese Christians on short leash. Two Portuguese Christian missionaries — Padre Rogrigues (David Lampson) and Garrape (Don Kenny) – guided by suspicious local Christianity-converted guy  Kichijiro (Makato Iwamatsu) arrive at a Japanese coastline under the cover of darkness.

Endo’s novel as well as Shinoda’s direction was hailed for its ambiguity. You can witness that in this opening sequence as the Padres aren’t very sure about Kichijiro’s nationality or his intentions. We aren’t sure about the Padre’s mission too. All we see are three characters waddling through dark shadows. Or may be the darkness of the night is a reflection of the darkness of the era. The obscure and feeble nature of the central Padre character also lurks in the darkness. Rodrigues and Garrpe are warmly welcomed by the hard-working farmers of Tomogi village. They are elated to see the priests as the village didn’t had a priest for years to hold a mass. The villagers’ decision to shelter the priests may lead to grave consequences, but still the people aren’t worried over reprisals (the villagers’ believe the rewards will be greater in next life). Rodrigues also witnesses how the people with no one to guide them have twisted the Christian rituals to a different form. Towards the end, there’s a brilliant scene where the prominent character soliloquizes, ‘the Japanese bend and change our God into something else, something quite different’. Although Padre Rodrigues and Garrpe have landed in Japanese soil to spread the near-extinct Christianity, their chief mission is to locate Padre Ferreira (Tetsuro Tamba). 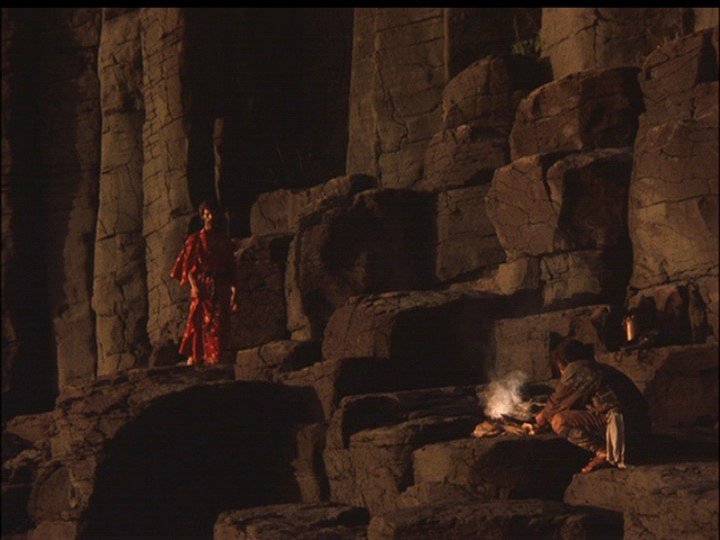 Ferreira is one of the very dedicated missionary, working in the region for more than two decades. Five years back, he has disappeared without a trace. Rodrigues intends to find out what happened to Padre Ferreira, who was also his mentor. Critics have often pointed out that the allure surrounding Ferreira and the revelation of his current identity is as close to the build-up of Colonel E. Kurtz character from Joseph Conrad’s novella ‘Heart of Darkness’ (best known through Marlon Brando’s performance in Coppola’s “Apocalypse Now”). Shinoda gradually and masterfully explores the diverse layers of elements in the narrative. The perceived antagonists of the story remain as humanistic in their conviction that it is so chilling. Furthermore, our allegiances with the central characters are also tested. Kichijro’s character raises quite a lot thought-provoking questions, as he hungers for redemption only to be repeatedly beaten down by weakness and guilt.

In an excellent essay, published in ‘Senses of Cinema’ (by Mr. David Phelps) on Masahiro Shinoda’s works, the director is quoted saying “I must categorize the films of the world into three distinct types. European films are based upon human psychology, American films upon action and the struggles of human beings, and Japanese films upon ‘circumstance’”. Japanese films are interested in what surrounds the human being.” Shinoda perfectly reflects (script co-written by Endo) the insignificance of a man when faced with overwhelming, oppressed situations. The Silence is a confounding experience of one man, undergoing a test of faith. However, Shinoda’s frames (like Endo’s novel) don’t place the bedraggled padre and the struggle of his followers at the center. Their surroundings and circumstances are often pondered over. The resplendent cinematography of Kazuo Miyagawa (“Rashomon”, “Ugetsu Monogatari”) often pins down the characters among the immensity of the surroundings. The turbulent sea waves, the intimidating volcanic mountains and the rich, fertile landscape always occupy the frames in a way, which makes the men and their struggles a trivial thing. Although Father Rodrigues resembles a Christ figure and Kichijiro, the desperate, guilt-ridden Judas, director Shinoda often hints at powers outside their control; powers that belittle their idea of sacrifice, or showcase apostasy as the only solution.

The individual’s crisis of faith — the predominant theme in Endo’s novel — is more humanely explored by director Shinoda. Kichijiro’s crisis of faith (aka the silence of god) is as fascinating as Padre Rodrigues’ faith. Kichijiro is a normal man with all weaknesses and skepticism, who wonders if he could have been a good Christian at the time when the religion is not banned. Kichijiro’s renounces his faith under personal duress, a compromise Padre Rodrigues finds to be despicable. The later series of ordeals traps Rodrigues himself and gradually exposes how easy to compromise oneself, even though it is difficult to live with compromises. Furthermore, the final decision by Rodrigues is drenched in grey shades. We endlessly debate within ourself whether it is good or bad thing. We see a man desperate enough to follow the path taught by scriptures, while on the other hand he comprehends about a moral compromise, given the fact that it reduces the suffering of others.  The fate of Ferreira and Rodrigues also provokes the question ‘what is sacrifice?’. Within the movie’s premise, the word sacrifice evokes the image of tormented Jesus on the cross. But, we see a different kind of sacrifice; one that differs from conventional martyrdom. Ferreira calls his unorthodox transformation as ‘painful act of love’. His choice (and later Rodrigues’ choice) makes us contemplate on the blurred lines between renunciation and sacrifice. 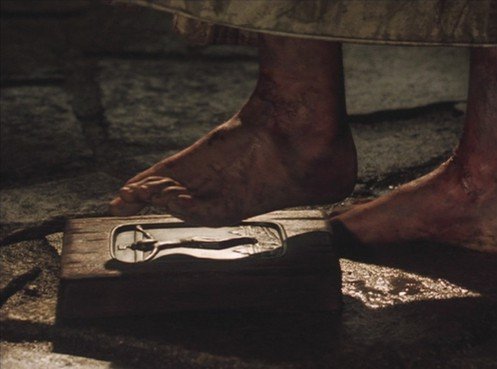 The greatest strength of Endo’s novel and Shinoda’s directorial approach lies in brilliant dramatization of the numerous perspectives of the characters. Nothing is simplified or reduced for the sake of closure or for providing simple clarity. In the fantastic debate between Inoue (a well-educated magistrate) and Rodrigues, the validity of one spiritual truth over the other is questioned. Inoue says to padre, “You selfishly force your dreams on us”. For the Japanese (or any government oppressing the rise of religion), Christianity is an invader which creates deception among general population to eventually take over the authority. For missionaries, the gospel is worth spreading, irrespective of cultural or national differences. We are moved by the torture and humiliation inflicted on people, resisting to renounce Christianity. At the same time, the intellectual oppression posed by missionaries is also questioned (to create a bigger need for religion and that their version of God is better than the existing one). The questions, of course, don’t come in the form of plain criticism, but more or less as an introspective study of author Endo. Director Shinoda is at his best in the scenes depicting the punishments and humiliations. The possibility of violence and brutality is beautifully expressed (especially in the haunting scene of Christian Samurai and his wife) rather than vividly exhibit the mechanisms of torture.

The experience of watching The Silence (130 minutes) may differ based on one’s religious views. As a non-Christian, I may not have understood many of the film’s vital elements, but still I am fascinated by this profound exploration on the nature of faith and sacrifice. Masahiro Shinoda’s powerful film-making style and stubborn refusal to demonize or glorify the characters makes it one of the best theological films. I am very much looking forward to Mr. Martin Scorsese’s take on this tale of religious persecution. It’s a project the legendary director has involved himself for more than a decade (actors Andrew Garfield, Adam Driver, and Liam Neeson play the role of Rodrigues, Garrpe, and Ferreira respectively).

The Closed World: The Films of Masahiro Shinoda — Senses of Cinema