Noah Baumbach, with his recent Academy-nominated film Marriage Story, has finally put a stop to the dissatisfying comparisons his work has always been subjected to with that of Woody Allen. I mean, I certainly hope so. It’s mostly the interruptions and the running dialogues that made people compare the two anyway, and I personally never liked the smell of it. Baumbach’s work has a very particular quality of grappling with realism, or what one can loosely call ‘slice of life’, at his own terms and with constant hits and trials. His 2010 film Greenberg is a perfect example of this ‘experimental’ realism that I associate him with above.

Starring Ben Stiller as Roger Greenberg, the film revolves around the ‘loser’, just-out-of-a-mental-breakdown Roger who arrives back to his hometown LA to housesit for his rich and successful brother. Here, he meets his lost past in the form of his ex-bandmates and an ex-girlfriend who comprise a world he can no longer find a place in. His growing interest in Florence(Greta Gerwig), his brother’s personal assistant, is a matter of constant conflict for him too; his self-awareness and the lack of it, both making appearances on his not-dates with her.

When Baumbach introduces the world of Greenberg to us, there’s something very impersonal about it. One cannot decide exactly why yet, but there’s definitely something missing that usually makes us predict what the character would do when a situation occurs. By the time Roger has been to the barbecue party, where we see him face-to-face with his past, we’re stunned because we still can’t figure out what he will do next. 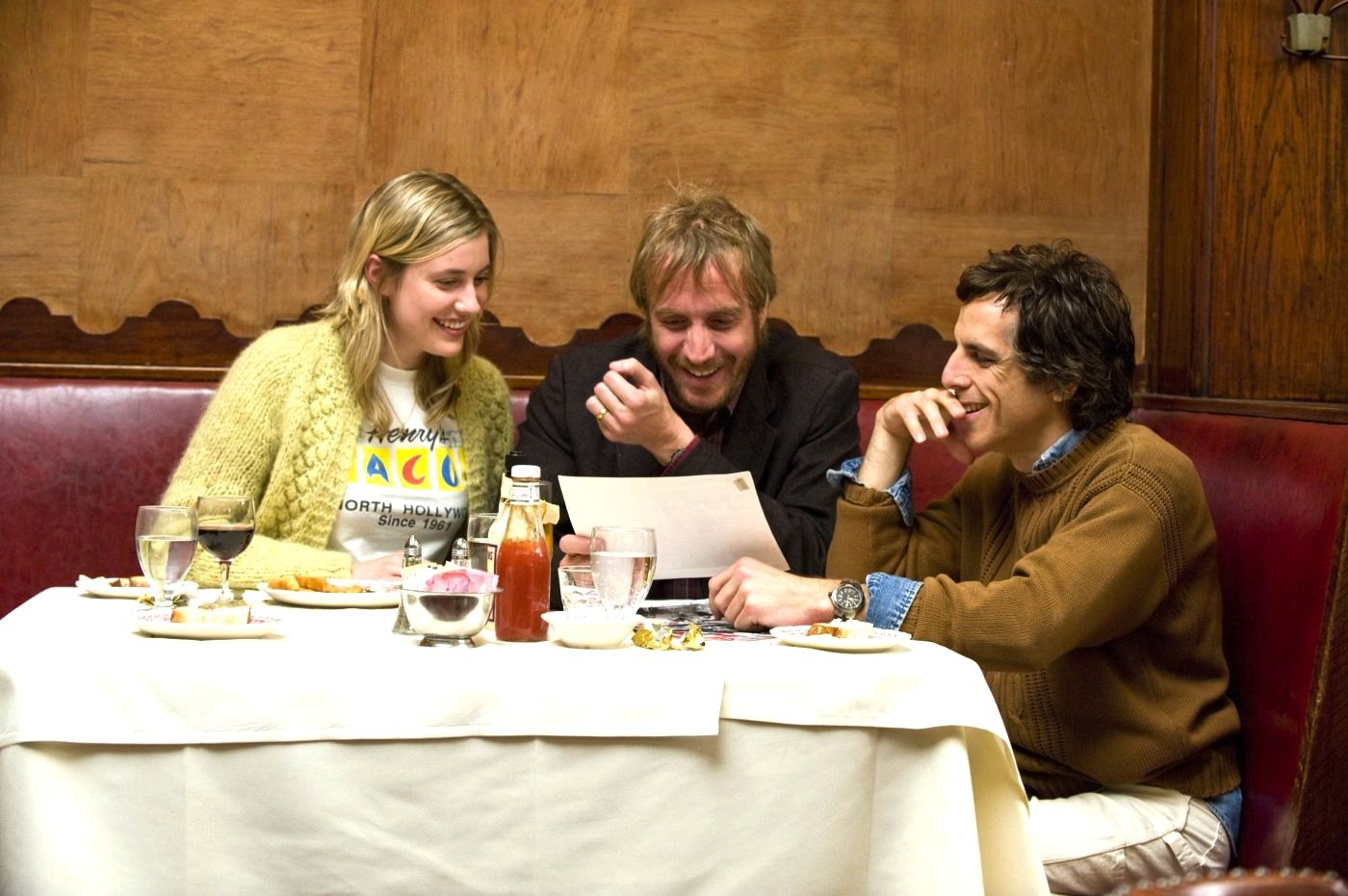 It’s not a thriller, the audience isn’t holding their breath, but it’s impossible to look away because while Roger is doing things that make sense for him to do, like making out with Florence at her place after having asked her out on a drink, the way it all unfolds reminds you of the awkward flirting that you might have witnessed that one time between two friends you aren’t particularly close to. There’s nothing sensual about it- no slow music, no light change, no close ups, no ‘sounds’ coming from the characters or their actions. The shot is still wide when Roger eats out Florence who’s lying there half naked, babbling about something in her own awkwardness. We, as an audience, are not in on the way they’re experiencing each other, or this moment.

This distance that the audience is kept at, comes time and again throughout the film. Rarely are we given access to the lives of these characters as insiders, or even friends. One of the rare examples is the brilliant tracking shot of Roger alone at the pool, as he tries to swim in his brother’s pool and almost drowns. We’re mostly outsiders, left to figure out these people by what they say and what they do around people that they themselves feel disconnected with most of the time.

The awkwardness with which we’re witnessing the story does not undermine our investment into the characters though. It intrigues by provoking us to figure out what the motivations and interests of these characters are; how they actually feel, especially Roger. So that when Roger stares at Florence smiling as she sings, and her friend talks about how sexy she looks up on the stage, you can’t help but believe them even though all you can see is an awkward, stiff Greta singing into the mike with an almost nervous expression on her face. You believe them because you know that they meant it when they said it, that from their subjective position Florence did look sexy. It’s like Baumbach is creating a subjectivity, one that the viewer can see as existing, yet have no access to. They can only acknowledge it and figure out what next.

Greenberg is thus an intriguing study in realism and construction of subjective awkwardness; one that forces the viewer to get perspective on their own. It shows what attraction and pain look like when you watch something from outside, with the lack of color and music that personal feelings provide.