Niccolo Machiavelli, the great political philosopher said, “It is better to be feared than loved if you cannot be both.” He also said that politics have no relation to morals. These ideas underlie the political satire “Mandela” directed by Modonne Ashwin. It is the story of an ordinary man put under extraordinary circumstances but more importantly, it is a social commentary on power. In India, the distribution of power is a complex phenomenon and has been the subject of many films and literary works. The repository of power is the Indian State, which distributes strictly defined functions to its various organs and instrumentalities. Peepli Live was based on the power of media in the Indian democracy, Black Friday highlighted the functions of police and investigation agencies in exercising the powers given to them by the State and Mandela simply reiterates the oft-forgotten truth of the Indian state- that it is “We, the people” that possess the real power and give it to the State by electing our representatives to work for us.

The film is set in a small village called Soorangudi where local body elections determine the “leader” of the village. Currently, the leader is a very old man who has decided not to contest the upcoming elections. Politics in Soorangudi is caste-based and it is clear that in order to get public support, one needs to possess high moral values and principles or at least appear to do so. However, the film is a political satire and doesn’t need to go beyond usual devices like irony to bring home the point. For instance, the people of the village are divided into 2 castes and the leader is married to two women- one from each caste. He wears a veshti (garment) having 2 different colored lines signifying the two castes so that he always appears neutral, but has adorned the walls of his house with several portraits of Periyar, the revolutionary Tamil activist who was anything but neutral in his politics. Two people from different castes travel in the same bus but prefer standing rather than sitting next to each other, but when they need to buy liquor and are short on money, they don’t mind sharing a bottle. The daily lives of the people of Soorangudi are replete with such small hypocrisies and ironies.

Related to Mandela – New Order [2020] Review – Another Level of Manipulation

The lead character named Smile and played by Yogi Babu is an outcast who works as a barber to make ends meet. He is not a total outcast because that means one who has been completely rejected by other members of society. Smile has a utility that allows him some interaction with others. He cuts hair, shaves faces, brings people their groceries, do all sorts of odd jobs and occasionally, gets slapped around and abused for belonging to the lower caste. He is illiterate and has only physiological needs, other things don’t matter to him because he is happy to get whatever life gives him. People call him names and Smile is just one of them, it is not his real name. Such is his social position that he doesn’t even remember the name his parents gave him, because he never had any use for it. He only needed to be identified. Besides, what’s in a name anyway, until it is. 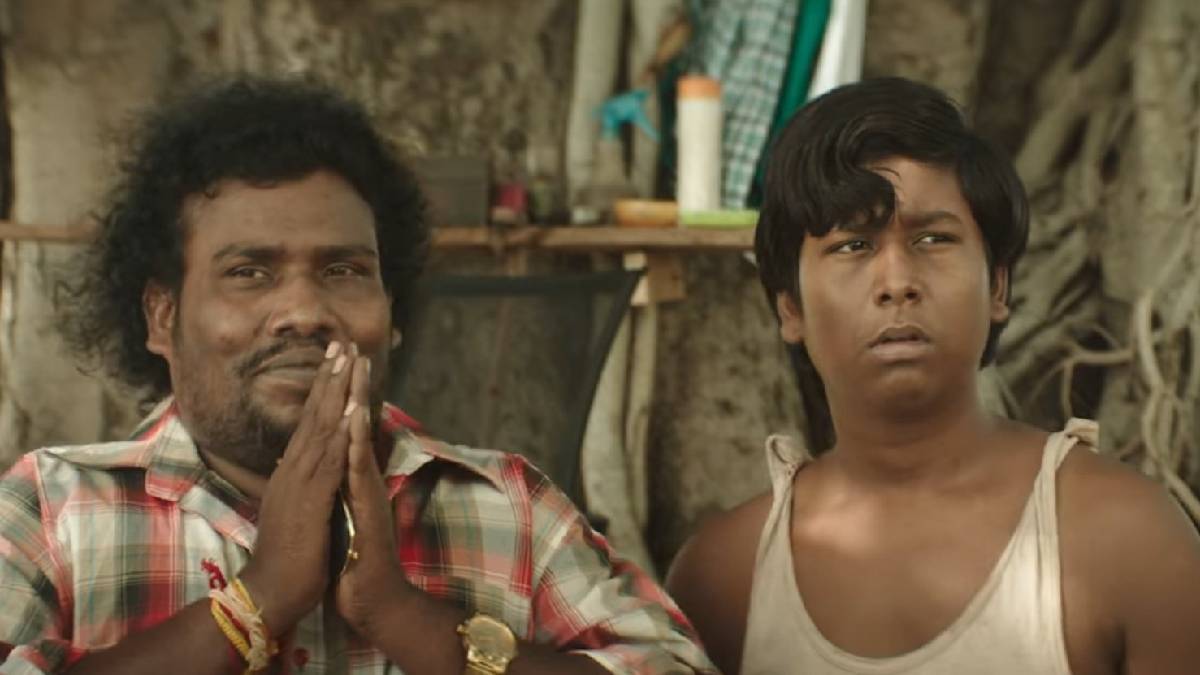 In order to keep his savings safe, Smile goes to the Post office in order to open a savings account. There, he is told that he must have a name in order to open an account. Sympathetic to his predicament, the in charge of the Post Office, Thenmozhi (played by Kumbalangi Nights fame Sheela Rajkumar) decides to give him a new name- Nelson Mandela. She decides on such a unique name because just like Mandela fought for the identity of his people, Smile is fighting for his own identity. Smile doesn’t understand this reasoning but is happy with the name because it is foreign and the real Nelson Mandela also had curly hair like him.

Tables turn dramatically when Mandela receives his new Voter ID and becomes the most important man in the village, for his single vote is going to determine who is going to be the next leader. The two sons of the current leader are rivals in the upcoming local body elections and the number of voters is equal to the last number. Mandela’s vote is going to make all the difference. This shift in the storyline is subtly indicated at the beginning of the film when the character of Smile is introduced in a scene where he is shown sleeping with the radio on and the song playing is describing how even a King has to bow his head in front of a barber and follow his directions. One is reminded of the old Hindi classic- Sar jo tera chakraye and its lyrics- apne aage sabhi jhuke hain, kya Raja kya Sainik (all bow down to me, be it the King or his Soldier). What follows is a series of dramatic events that ultimately culminates into a valuable lesson in politics- that power is what you make of it.

How Mandela uses his newly found power in the best way possible and the factors that lead him to it are the best bits of the film. Suffice to say that no matter the severity of the personal sufferings he endures, Mandela uses his power to the greatest advantage of the whole village, and it is symbolically evident from the 1st and the last frame of the film. The lesson lies in what happens between these two frames. The powerful man can either be feared or loved. At first, Mandela is loved by all and enjoys the importance he gets but soon realizes the hollowness of it all when the people start fearing him for his power and begin threatening him. He doesn’t understand anything at first but eventually becomes fully aware of the enormous power he wields and once he does, he embarks on a journey that wins him love and respect from the same people that once outcast him so cruelly. But Mandela is not the story of one man’s rise to power. It is the story of people, politics, and the system called democracy.

I'm a lawyer. I love talking about anything at all related to films and filmmaking.