Gaslit (Season 1) Episode 4 Recap & Ending Explained: After a disappointing Episode 1, the show has been slowly recovering from its odd template. The real-life drama seen from the perspective of unheard people that were part of the Watergate break-in and the subsequent catastrophe to the US government opted for a cartoonish approach to its initial episode sidelining the show’s protagonist to the corner. While episode number 4 of Gaslit is still making us anticipate Martha’s actual arrival, the show is frankly doing well by trying to subside its weird combination of comedy and drama.

Titled ‘Malum in Se,’ a phrase that translates to an action that is considered inherently evil or sinful; the episode opens in August 1972, two months after the Watergate break-in that was recreated expertly in episode 2 of the show.

The opening also clues us into Dean’s (Dan Stevens) newly found closeness to Nixon after John Mitchell (Sean Penn) was fired because of his close association with the break-in. The opening sequence also shows us a fictionized version of Alexander Butterfield involved with some in-house surveillance tapes.

The focus instantly shifts to Martha Mitchell (Julia Roberts), who is clearly suffering from PTSD and has nightmares about what transpired with her when she was caged in her hotel room in California.

Their daughter Marty, who has been used as a ploy between right and wrong here, is in splits and has seemed to develop a drinking problem. In a classic parental avoidance trope, we see her sipping to drinks lying around the house while watching movies and during one of the parties that the couple throws.

In one of those instances, it also comes up that John isn’t entirely happy with getting fired despite posing a happy exterior. He is seen drowning his sorry in alcohol and listening to Nixon on the television, which Martha notices when she stumbles into his room completely sloshed on prescribed drugs for the traumatic experience. 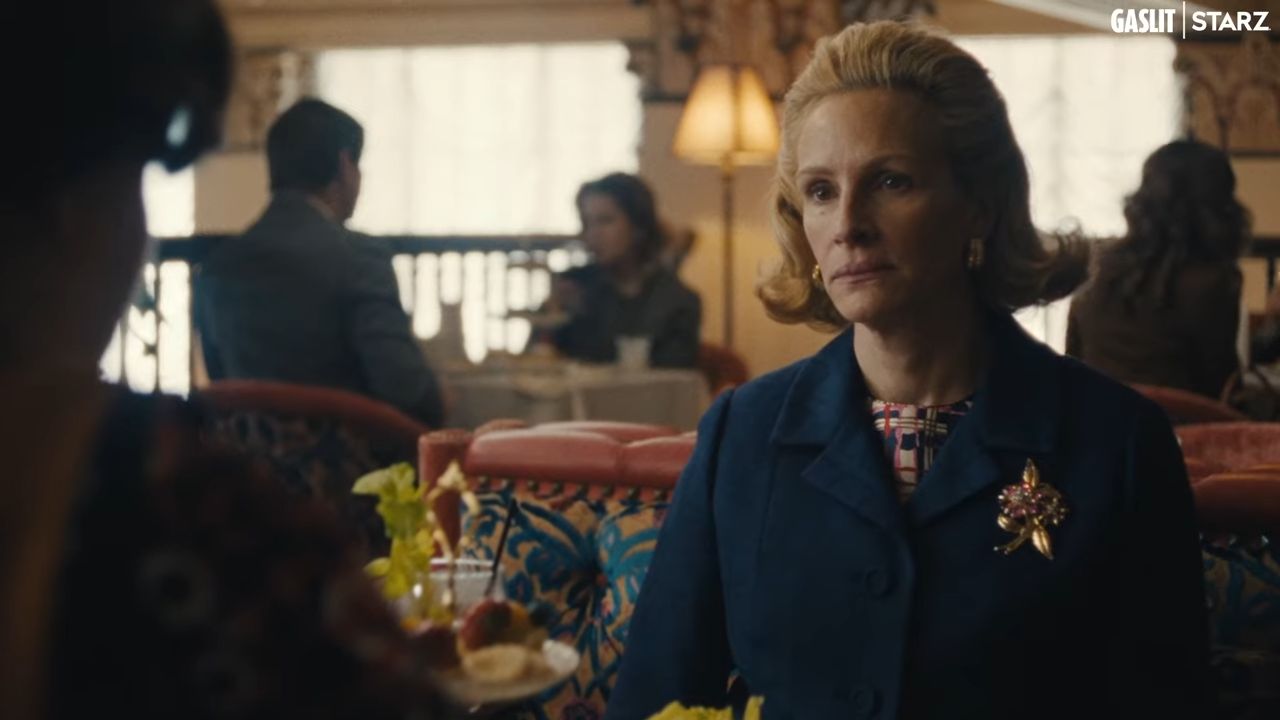 Parallelly, we see Howard having cold feet about being accused of the break-in. He pleas that Liddy ask the administration or the president to at least promise them some kind of relief if they are found guilty. To which, Liddy reacts violently by waterboarding him and asking him to keep his mouth shut and not talking about the higher authorities involved.

Liddy, who comes off as freaky (the episode’s title comes out in one of the sequences) and believes in certain ideologies that pertain to worshiping the powerful, is ready to sacrifice himself for Nixon. Thus, when the judge declares the sentence of 30 years for all the five burglars, including Howard and Liddy, the latter comes unmoved. The judge thereafter announces that final sentencing (post the defendants rethinking their stands for someone bigger) will occur after two months.

On the flip side, the FBI agents Magellanes (Carlos Valdes) & Lano (Chris Messina) continue their investigation and draw closer to finding new leads. FBI director L. Patrick Gray (John Carroll Lynch), who has been secretly working for the president, tries to divert the investigation by telling the agents that they can’t question higher officials without concrete proof.

So, they ask permission to interview the lower section of the White House. Worried that he will face doom, the director reaches out to Dean for help, who then gleefully intervenes in the interviews conducted by the agents, giving them nothing in hindsight.

However, Judy Hoback (Marin Ireland) hints toward the close involvement of Liddy with something fishy. She leaves a note for the feds, meeting them later to reveal about Operation Gemstone and the involvement of all the characters we have seen so far in the break-in. Parallelly, Dean is threatened by Ken Dahlbeg (the man who sponsored Operation Gemstone) at the 1972 Republican National Convention in Miami Beach, Florida.

Dean, who is still unable to decide between his truth and supporting the mighty president, tries to find solace in Mo’s (Betty Gilpin) shadow. She effectively breaks up with him because she has had it with his two-faced behavior and inability to choose sides.

However, near the end of the episode, Dean pays her a visit at her home, making things unsure again. Towards the end of the episode, Martha wakes up in the haze of her drug-induced party. She sits there reminiscing about her husband’s sorry state before being nudged by her daughter to give the journalists waiting outside the leftover cake from John’s birthday party.

Martha, who has been hiding what happened with her in California, revamps her sorry persona and turns back into the loudmouth wife we have comes to witness in the initial episode. The ending of Episode 4 finds Martha spewing to the press that her husband was merely a scapegoat in Nixon’s plan for the Watergate break-in and that it is her truth and should be taken that way.

However, the closing moments of the episode see Martha passing John in an alleyway after addressing the press, expecting him to be happy; but he seems visibly unhappy with her claim, leaving Martha completely perplexed.