Home»Articles»The Pied Piper of Corto Maltese and the Chaotic, Entertaining but Insightful The Suicide Squad (2021)
Articles/Essays

James Gunn has done it. He’s officially made the biggest, goriest and most badass superhero blockbuster. Or should I say the most shady, obnoxious, gory anti-hero film? Whichever be the case, although I’m inclined towards the latter, it’s one of the most entertaining comic book movies of all time. With an ensemble cast and too many characters to start with, The Suicide Squad (2021) is a celebration of entertainers and the sheer amount of fun you can see and feel, within the chaos, is simply amazing.

Right within the first ten minutes it sets itself apart as a staggering whirlpool. There’s too much chaos to even wrap your head around, and then there’s some more. The amount of stuff that happens before the opening credits is overwhelming, and yet it’s not. The obnoxious tone actually helps revel in the chaos as a celebration. So instead of feeling overburdened by the weight of the events, you’re laughing along as the witty fast paced dialogue complements the break neck pacing of the story. The film is the literal embodiment of non-stop entertainment, but it gets carried away enjoyably.

The impressive cast pays off really well. Margot Robbie is charming as always, and this Harley Quinn is infinitely more endearing. The almost Disney-like side-plot which ends in Quinn shooting from a gun she didn’t even know had bullets, is the perfect piece of writing that her character needed. The action sequence is equally impressive, and Robbie’s stuntastic killing spree is a truly cinematic bloodbath. Idris Elba and John Cena, whose characters are practically the two sides of a coin, seem to be having a blast with the characters, and the infectious energy rubs off on the viewers.

Then there’s my favorite character – The Pied Piper of Corto Maltese. She has the most compelling backstory. Taika Waititi’s cameo and only line is unexpectedly insightful and warm. The connection that is there between Ratcatcher 2 and her past and present is touching. Her character development is the most palpable, and that’s possibly because she’s the only one out of her depth. That being said, her moment to shine felt beautifully placed and deserved. Plus, Daniela Melchiro does a great job of playing the only emotional character in the film.

Not the only one though, as David Dastmalchian’s Polka Dot Man is also a very uniquely unstable character who has emotional moments. His backstory is well incorporated into the present, and the weight of his journey is compelling. The fact is, the characterization of everyone is so well done you can feel the horror of how they ended up there. Yet the tone and their own approaches to life, sends the message that you can manage with the right attitude. That’s apart from Quinn who’s simply having a gala time with her unhinged antics, although she goes through a lot. Her journey is unbelievably meaningful, but that’s hinted at and not openly focused on. 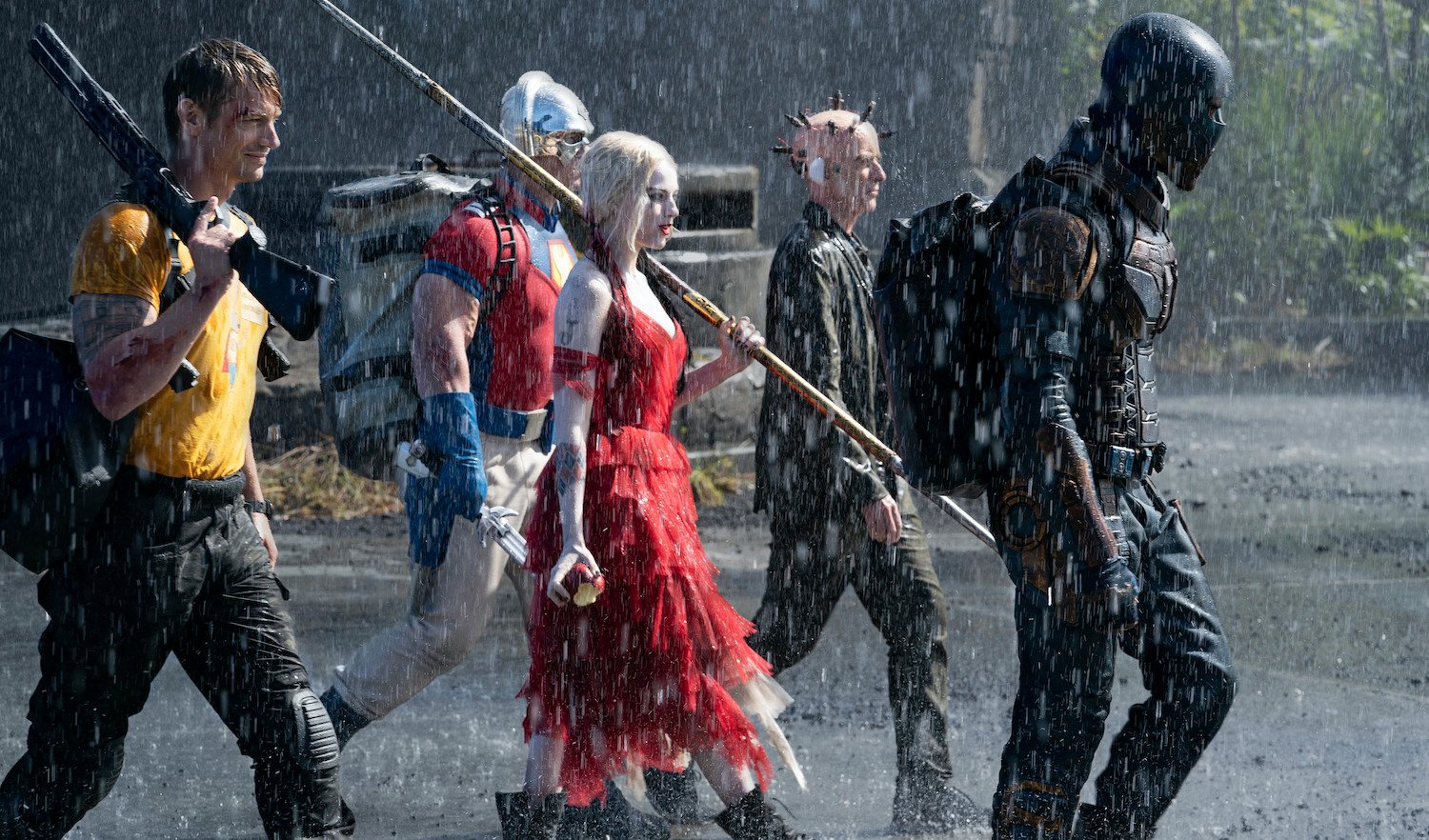 Most of the film is like that in fact, and the basic story structure reflects it. There’s too much fun to be had and the balancing of tone between serious character moments and exhilarating fight scenes is expertly executed. The writing for everyone, is top notch. All of them get weird and over-the-top epiphany-like moments at least once, and Harley at least thrice, but most of the dialogue is just infighting. The infighting is classic and you don’t find it to be too much no matter how clearly it is so. Bizarrely enough, there is a lot of meaningful realizations too, which aren’t preachy, but convey important messages.

The best thing about The Suicide Squad is how it doesn’t try to be anything it’s not. There’s an almost defiant self-awareness about this absolutely bonkers project. It satirizes American politics very clearly, and beautifully portrays the meaning of brotherhood. It also serves to spoof superhero blockbusters by crossing all lines they don’t, and being in-your-face about it. It is also an indictment of the immigrant handling in America. Of course, the over-zealous scientist who harms others in pursuit of answers is also attacked. However, The Suicide Squad is none of that. It’s 140 minutes of amazing entertainment that achieves the aforementioned, but is mainly about the fun of the chaos that celebrates life and allows you to relax.

Related Read to The Suicide Squad (2021): Revisiting Gangster Squad: Was It All That Bad?

Two other mention worthy aspects are the cinematography and the soundtrack too. Every fan of Guardians of the Galaxy will be hoping for another amazing tracklist and they will not be disappointed. A mix of songs across genres that complement the unrelated events happening on screen, form a good backdrop to the chaos. As for the camera work and editing, it’s unexpected. Nothing could have prepared me for the montage of Harley Quinn shooting people and flowers gushing out instead of blood. Spinning motions, and tracking shots, and unique angles add even more pizzazz to the visuals.

Often with superhero films, the payoff is not as big as the setup, but The Suicide Squad tackles that perfectly. The scale of the entire story is big in terms of characters. Of course there’s real world-ending stakes (how else would it be a comic book movie?), but the tension is barely conveyed because of the over-the-top chaos. It’s hard to take it seriously, because it doesn’t take itself seriously for most of the time, and that’s part of its charm. The character development and climactic moments define the finale, and that’s what makes it satisfying. The solution could have felt oversimplified as is typical with superhero stories, but it doesn’t due to the completion of the character arcs.

Related Read to The Suicide Squad (2021): The Gentlemen (2020): Of Ugly Laughs and Gentle Thrills

To sum it up, this is such an epic film of larger-than-life proportions that it doesn’t try to behave like that, itself. You just have a bunch of D-listers do what they’re best at, and you feel rewarded watching the chaotic journeys that bring them to a finale which is visually and emotionally satisfying. The jokes and insults are barely subtle and so is the attack on the Government. It’s achieved a lot in terms of satire in fact. However, it identifies as a feature film length story of how to setup and payoff a Battle Royale so that everyone feels entertained and fulfilled while having an infectiously high amount of fun.

Kasada Thapara (2021): A Collection of Short Stories Connected By A Hyperlinked Narrative