The horror-comedy movie Office Uprising is set at a weapon manufacturing company named Ammotech. The story (which there is not much to start with) revolves around Desmond (played by Brenton Thwaites), an unsatisfied worker at the Accounting Department whose passion is creating his own video game but he still works there to be close to his “platonic” friend Samantha (played by Jane Levy) from the HR Department.

As Ammotech decides to merge with another company, the news of probable downsizing spreads. This demotivates all the workers. A motivational seminar is called to inspire the employees. Desmond cuts the meeting short and goes home early to complete an unfinished report. When he comes to his office the next day, he finds all his co-workers and executives turned into “zombies” as they had drunk an energy drink called “Zolt” manufactured by Ammotech.

Desmond finds his colleague Mourad aka Mo (played by Karan Soni) who is still sane as of not drinking Zolt during the month of Ramadan and Samantha (what a surprise!) who turned into a kind of a “semi-zombie” as she had drunk from half of a Zolt can. Later, Lentworth, who is newly fired after the downsizing and most importantly, still 100% human; tags along with them.

Zachary Levi plays the role of Adam Nusbaum, the regional manager of Ammotech who happens to be Desmond’s boss. He has been an unpleasant boss since the beginning but Zolt makes it worse. Eventually, he becomes the leader of the zombie pack and the one to run away from.

Now, how do the sane humans survive an office full of hyperactive zombies and get out of that building? That is it. THAT is the story. 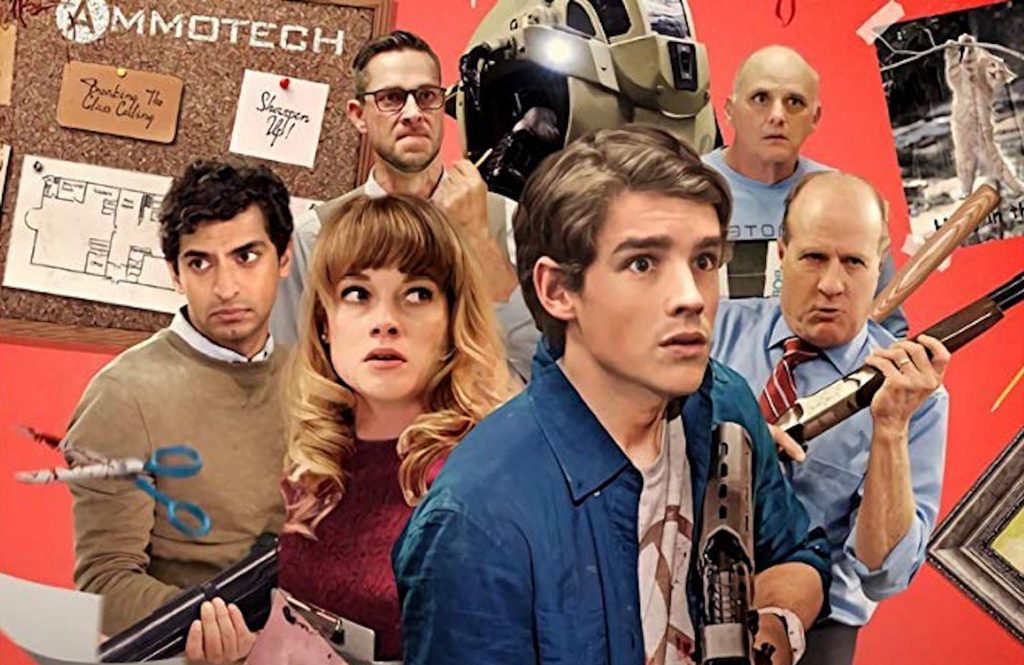 Office Uprising is not a traditional “zombie movie”, let me just clear that out. The “adventure” here is not killing the “zombies” who are just crazy psychopaths and still have their senses working. They can think, talk and follow plans. The fully affected people here are the ones who drank at least one can of Zolt. It essentially augments all the faults and foibles in their characters, pushing them to respond aggressively to everything they come across.

Does the movie not being a typical zombie horror make it better? Sadly, no. Just like one of those moments when your friend fails at attempting something new and you give a pat on his shoulder saying, “Nice try.”; this is a “Nice try” type of movie.

Lin Oeding directed the movie very reluctantly. Nothing exceptional is done behind the camera. The camera work is lazy and there are zero excitements on the screens. There is no newness in the technicalities. The background scores do not have that zing factor that would help to set the scenes according to the parts of the plot.

Unfortunately, Office Uprising did not rise at all. What it did was, it took a fall. It contains over-the-top violence and doltish jokes that make the movie neither scary nor funny. As I stated earlier, the storyline is as plain as the flat-earthers claim the earth is (or maybe even plainer, not quite sure on that one). The performance by the cast members is unbelievably comedic, their expressions are so pretentiously animated that at some point during the movie, you might have to pinch yourself to come to the senses that you are not really watching an animated film. Additionally, the CGI is abysmal as well.

The movie has hyper and fast-paced action sequences which are the only good bits to make it alive and somewhat watchable. Brenton Thwaites performed his own stunts *cue: applaud*. One thing for sure, you will not fall asleep during the movie (cannot say if that is a pro or con).

You have free time to kill on a boring afternoon, that is when you watch Office Uprising. You and your friends are having a stayover and you want to watch something “silly”, just to have a laugh, that is when you watch Office Uprising. You want to harshly criticize how bad a horror-comedy can be, Office Uprising is your perfect choice. Or maybe you had a bad day and feeling blue, you think nothing can be worse than your situation, give Office Uprising a try, you will definitely feel better. Considering these reasons to watch this movie, seems like it is not completely fruitless after all. Well, well, what a relief!