Movies about serial killers have caught the audience’s fancies for years. The age-old formula brimming with mystery, excitement, a whole lot of killing has proved to be a success. Now add that up with rollerblades and you get Berty Cadilhac’s ‘Roller Squad (2021)’, albeit it doesn’t really recreate that formula. A serial killer on rollerblades wreaks havoc on the surprisingly diverse (racially and culturally) rollerblade community of London under mysterious circumstances. Four flatmates with vested interests take it upon themselves to ascertain the killer’s identity subsequent to law enforcement apathy.

True to the nature of Cadilhac’s most precious commodity’s nature, ‘Roller Squad (2021)’ moves at a fluid pace. Most of the runtime features characters on rollerblades, gliding through the unexplored and giving streets of London. The beautiful design of these sequences must be taken note of. Despite working on a bootstrapped budget, the final look, and feel of those shots is premium. The film also features snippets of real rollerbladers showing off complex-looking stunts with relative ease that are a homage to the culture that has flourished in the city. But besides the quality of some of those gliding shots, the film plainly falls flat on its face.

Every movie, without fail, needs a good screenplay. Poor writing has never taken a movie anywhere. That’s probably the first aspect missing from ‘Roller Squad (2021)’. Until a certain point (when Mike is killed), the screenplay is neat and purposeful. Characters engage in actions that take the story forward and provide new clues to the viewers. Post that, it is almost as if the writers themselves lose interest in the plot and are determined to take the story to its resolution. There are numerous attempts by the creators to invoke the “comedy in the face of tension” syndrome that has become increasingly common in modern films.

With the intention, scenes need a good layout, appealing repartee, and above all, sincere execution. Unfortunately, all three elements seem to be missing. Even the simplest British dramas have inherent humor in the very environment of their universes, without any special emphasis on making something funny. ‘Roller Squad’s attempts prove futile and uninspiring. Most of those moments are too cringy to evoke laughter, especially the delivery and timing of the performers. The scene involving George and his pregnant cat is one example of this shortcoming. 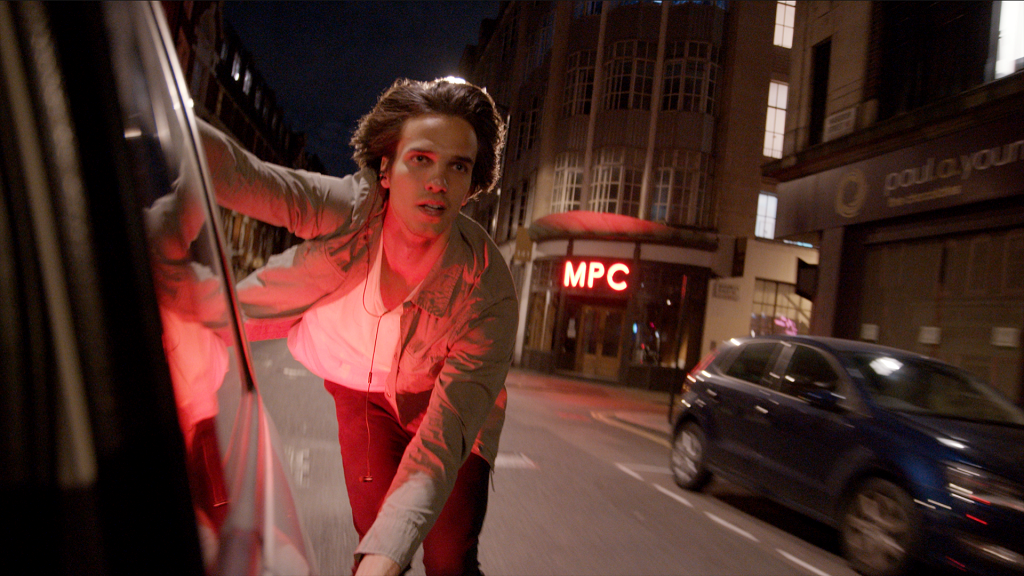 And then there’s the chasing. The endless chasing. The good guys going after the killer becomes such an overused tool that you almost start wondering if that video is on repeat. There are almost no attempts to distinguish the climactic chase to make sense to the viewer; I was myself confused trying to connect the moving pieces. The delirious wandering around doesn’t manage to rack up the thrill or mystique that probably the opening shot managed to get. The polish in Harry’s pursuit by the murderer was desired in similar scenes thereafter, most significantly the climax. While it is important to factor in the low budget and scale of production in films like ‘Roller Squad (2021)’, the lack of respect for the basic tenets of filmmaking is unforgivable.

Unfortunately, the performances by the cast do not live up to expectations. Alice Sanders, who plays Kat, is probably the most recognizable face among them, does well in parts but is disappointingly mechanical in her delivery and doesn’t fully establish a prominent screen presence. The same goes for the other three leads. The four lack chemistry that generally elevates scenes. The “reaction to an action” element of screen acting that makes or breaks a film does not manifest in key moments.

Apart from the storyline, there are no indications of the nature and motivation of the killer, apart from the drab and highly contrived theory of Kat that she comes up with in front of the detectives. This lack of engagement with the antagonist inhibits a dialogue between the director and writer through the actors with the audience. Some great examples can be found in recent indie movies of the times wherein the filmmakers do a tremendous job in making do with what they have.

‘Roller Squad (2021)’ creates hope with a premise that promises so much is eventually left to waste. Its shortcomings harken back to the value of the old adage: “it is not what you have, but what you do with it that matters”.