When Mimi (2021) dropped on Netflix, I decided to watch it immediately. I have been riding high on its catchy song “Param Sundari” for weeks now. Kriti Sanon’s effortless charm, the film’s plot, A.R. Rehman’s haunting soundtrack, and Pankaj Tripathi could lure anyone in this cinematic space in a jiffy. But despite these fabulous factors, the film falters in delivering a nuanced tale on surrogacy.

Within ten minutes, it introduces the theme of commercial motherhood. White Americans touring a “poor country” like India to find a “young and healthy girl” for womb rentals. Summer (Evelyn Edwards) and John (Aidan Whytock) are an infertile but wealthy couple. They are desperate to become parents but only find a factory-like male-dominated system of surrogacy in India. Their cab driver, Bhanu Pratap Pandey (Pankaj Tripathi), decides to help for a whopping five lakhs rupee. The next scene introduces Mimi (Kriti Sanon), “the most beautiful and talented dancer in entire Shekhawati,” who dreams of making it big in Bollywood. But she is poor. She can’t even afford to put together a casting portfolio. So, when Bhanu explains surrogacy to her along with the rich couple’s offer of twenty lakh rupees, Mimi jumps on the proposal that involves no sex. She can finally be a star! But when it’s revealed (sorry, spoiler) that the child has Down’s syndrome, Summer and John decide to not take the baby. A heavily pregnant and underpaid Mimi is left to face this ordeal alone. The rest of the film, as one might expect, should build on this shocker, and perhaps lend a powerful commentary on issues of orphanage, surrogacy, and single motherhood.

But instead, it falls flat. Too much happens too quickly. Nuance is absent. Whereas Mimi had taken care to hide her pregnancy before, after the betrayal she carelessly runs through the streets to confront Summer and John. But they already checked out of the hotel and out of their responsibility towards her. She collapses in the middle of the street, crying. The scene is emotionally powerful, but I was hoping the film would explore her feeling of shame and utter helplessness. Believe me, a public display of a heavily pregnant unmarried young woman not only raises eyebrows in India, but it can also lead to harsh patriarchal reactions against her. The film also fails to explore the failing of Mimi’s Bollywood dream and the loss of her bodily agency.

The song “Rihaayi” deals with all of this in a few minutes. The battle, though, deserved more than a montage. Commentary on female rights and abortion comes as mere lip service. Critiques on the Indian obsession with fair skin and conversations around prenatal screening tests needed more than one-liners. Ideological commentary is not art’s imperative. I get it. But the underwhelming representation of larger socio-cultural criticism is, especially when the film has successfully managed to garner pre-release attention on the basis of its Hatke (unique) story. Overhead shots of gorgeous Indian landscapes seem to be making up for the lack of the film’s refined approach to narration. 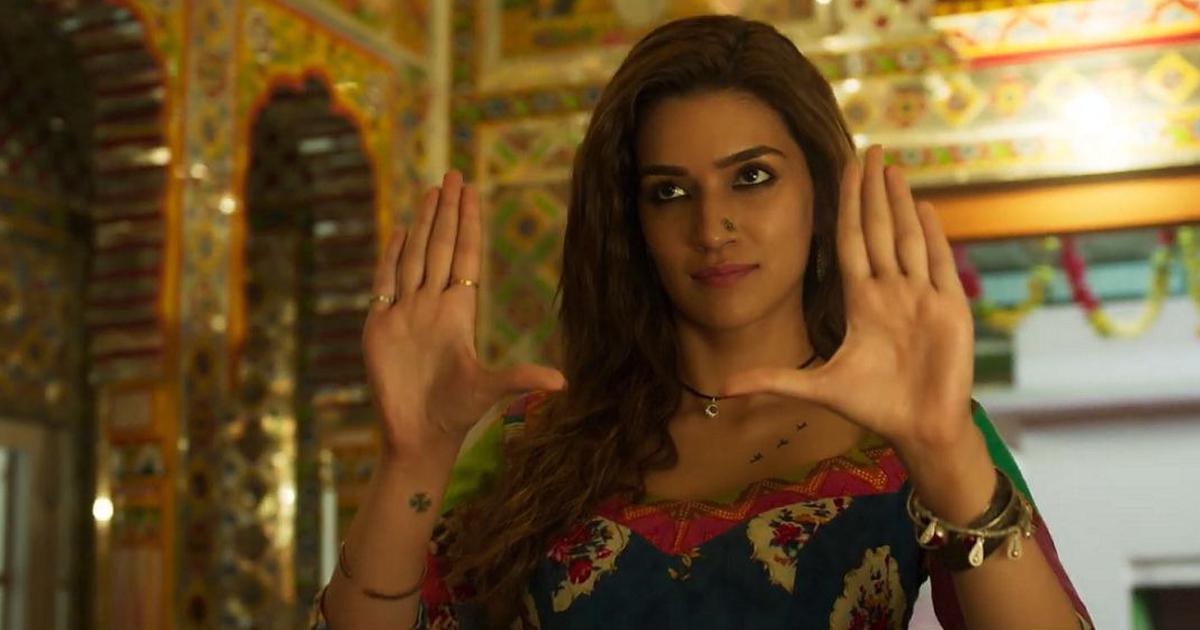 How can a feisty, independent Mimi who prefers cinema over men quickly give up her life-long dream of Bollywood? Her change seems hasty and naïve. A young Rajput woman who has defied all patriarchal shackles to emerge as a well-known performer in her community succumbs to money and motherhood too quickly. Everything comes across as too tidy, a deus ex-machina. Moreover, when Summer and John realize that the child is healthy, they come back to take him away. John threatens to take Mimi to court. Bhanu then tells them, “It’s harder to fight out and survive. Mimi has fought a long, uphill battle with herself, the society, her dreams. After Raj [the child] was born, she bundled up all her dreams and threw them somewhere far in the desert.” As a viewer, one hardly sees Mimi’s struggles with “society.” Kriti Sanon has done a fantastic job in exuding her individual struggles through her silences, cries, and anger, but she hardly ever takes control of her own narrative for a longer screen period.

The film haphazardly resolves issues that need more insight. Down’s syndrome disappears. That Raj is born healthy only reinforces ableism, a problem mainstream Bollywood (and India on a whole) is still reluctant to address. Mimi’s orthodox Rajput parents are readily accepting of her. No communal pressures or rude insults are ever meted at the Rathore family. Shama, Mimi’s divorced Muslim friend, is simply a doting friend devoid of any complexity. Her struggles as a young, divorced Muslim woman living with a strict religious father rarely find expression. Bhanu’s estranged wife and mother also join in the celebration of a single surrogate Mimi. The world that Mimi inhabits seems real at times, but also grossly unrealistic. Every character seems to exist only for her, without any depth or subjectivity.

Related Read to Mimi [2019] Review: A Death In The Gunj (2017): A Brooding Atmospheric Mystery-Drama

Despite its obvious shortcomings, formulaic entertainment Mimi is fun to watch. Kriti Sanon and Pankaj Tripathi are entertaining. They carry this story on their shoulders throughout. Supporting characters are sometimes memorable in their little quirks. In these atrocious times, the film’s simplicity can be a much-needed escape. Watching an American couple in cultural conversation with an Indian family encourages more cross-ethnic collaborations on screen. I just wish this could have been something like Shubh Mangal Zyada Saavdhan, the 2020 gay comedy, a first in mainstream Bollywood that balances entertainment and smart cultural criticism. I wish the writing was stronger, too. I wish it had ended differently and not with Mimi sacrificing everything for motherhood. The film starts bold but ends with bolstering traditional gender codes.

But hey, an unmarried single mother accepting her surrogacy is a good start to stir the popular Indian imagination. The 2002 Bollywood film Filhaal has also dealt with surrogacy but Bollywood film fans are quick to forget. We still prioritize entertainment over realism, popular actors over method ones. Things have started to change though and I hope filmmakers can take bold risks instead of catering to established mass sensibilities. Nevertheless, go and watch Mimi for its flawed yet fair attempt in diversifying Bollywood.

Ankita is a hopeless cinephile based in New Orleans. She survives on chai and films. Her journalism, essays, poetry, stories have been published widely. She is currently finishing her Ph.D. thesis on Bollywood crime films.

Mimi (2021) is currently streaming on Netflix