Srijit Mukherji’s maiden Hoichoi venture, Rabindranath Ekhane Kokhono Khete Ashenni aka Rekka (based on Bangladeshi author Mohammed Nazimuddin’s 2015 novel), is one of those bewilderingly bad series where a lot seems to be going on all the time plot wise, lots of cross cutting, but the action and emotion are so dutifully verbally underlined by its characters that you stay continually unmoved, perplexed by the sheer startling poverty in craft, and ultimately just damn bored of it all. To rail against the series’, lack of daring in its grand vision and scope is to frankly over reach in one’s appraisal of the same that merely relies on reams and reams of exposition, explanation doled out most diligently, trusting nothing to your imagination and wit.

The setup is simple. Nirupam Chanda (Rahul Bose), who introduces himself as a journalist, arrives at the eponymous restaurant in Sundarpur, a fictional town in West Bengal, to do a cover story on its owner, the enigmatic Mushkaan Zuberi (Azmeri Haque Badhon), whom apparently no one seems to properly know. She exists at the cusp of everyone’s desire and need for familiarity. To unravel the history, specifics of the restaurant and the place and how Mushkaan came to own it, Nirupam teams up with Attor Ali (Anirban Bhattacharya), a local who doubles as a police informer in Sundarpur. There are references and tangents on the scourges of the Pakistani military forces in the 1970s, zamindari property disputes and takeover, the fraught political past, scams in the medical sector, a plane crash that the series begins with and occupies nearly two episodes.

At one point, Mushkaan remarks that the pressure cooker flattens out the mélange of tastes ingredients offer in a recipe. She might just as well have been alluding to the series that steamrollers all these layers on the narrative into dull stretches that possess no brio in its writing and filmmaking. There is also a track about a character who apparently foresees deaths and digs graves in advance and sells skeletons to the city; he too is casually dispensed with as Attor Ali is. Ali is introduced as a significant character with a supposed crackling dynamic with Nirupam; the series razes all of that and Ali’s exit feels abrupt and jars against the buildup to his character’s position in the narrative. 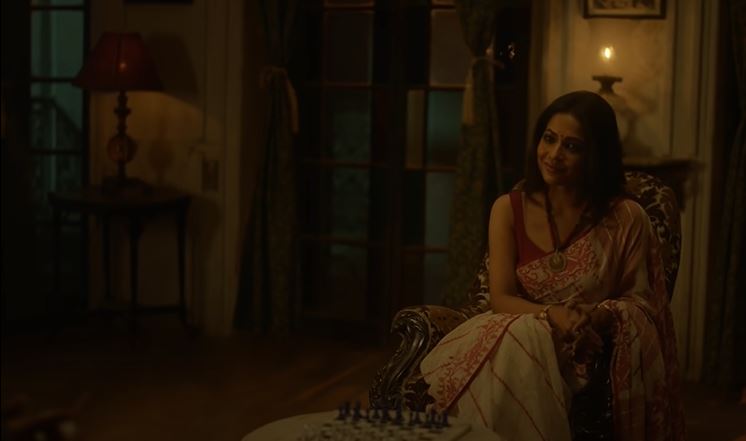 The series marks a new benchmark for the laziest visualization of Rabindra Sangeet. Jayati Chakraborty’s renditions are sublime but the series squanders them most embarrassingly, threading them into the narrative in ways that frequently alternate between mind numbingly literal and preposterously unreasonable. The compositions, rearranged by Joy Sarkar, are ostensibly used as a device to build Mushkaan’s interiority, as she goes about her daily rituals- cooking, laying the tables, wandering through the rooms, hallways. As a friend pointed out, it is all so ridiculous that even a possible reason of worry does not interrupt her singing “Majhe Majhe Tobo Dekha Payi” in the shower. The sequences are tediously repetitive in ideation and execution, and they rob Mushkaan of any charm and immediate allure, turning her into the stuff of pure unbelievable, untruthful clichéd representation.

She is the typical mystery woman character, who remains tantalizingly out of reach of all those who woo, chase and try to fathom her motivations and moods. She plays along with a mix of insouciance and cheeky mischief, while never forgoing her position of absolute authority over them and swaying each supposedly unfavorable situation to her will and fancy. Throughout the series, her dominant position never slips, which diminishes the sense of dramatic stakes. She is confident about being in charge and the series reaffirms its plain sailing status for her all the time. Her plotting is so miraculously fault proof in its sustained brilliance that the series gets inescapably yoked with the task of convincing us of something that is anyway tough to pull off: she is smart and conniving beyond reproach in each move she makes.

Rekka fails this rudimentary requirement that’d have us persuaded the viewer of her many ploys. Her machinations carry the sense of an exaggerated ease that consistently tests credulity, and we never come to terms with the depth of her intelligence or even remotely understand in her whole. She seems too constructed as a character than as someone built fully, a creation we are supposed to be alternately fascinated with and marvel at than feel the overarching emotions that undergird her extremely dramatic, flabbergasting journey over the decades.

I haven’t read the novel so I can’t comment on the point of reference and can’t claim to know how Nazimuddin had projected Mushkaan’s backstory, but Mukherji’s opting for a long monologue, having Badhon rattle it off, intercut with flashbacks to prolonged sections in the Andes mountains, is an eminent misstep which sinks the series even doubly so. The plane crash anecdote could just as well be the most unforgivably amateurish and atrocious thing you will get to watch this year.

We get a clutch of foreign actors with most garish acting imaginable, clumsy direction of the most outrageous portions of the narrative and Badhon’s accent which is a beast of its own; cumulatively, it is excruciating to watch. The descent into raving, savage monsters comes off as some school production, teeming with artifice and many an unintentionally hilarious moment. This portion needed the deftest, light handling and its common wisdom by now that Mukherji has anything but those.

The monologue that breaks off from an initial two hander conversation seems interminable as the wishy washy dialogues are made more agonizing to endure thanks to Badhon’s confounding limited variation in expression, gestures and voice modulation, even as she moves from recounting grotesque episodes to the brighter, lovelier times of her life. The narration is wholly trite and the entire gamut of emotion is traversed but nothing registers as Mushkaan’s anguish and tribulation is barely plumbed by Badhon and is purely presented as a diverting spectacle.

Its connection to her present state of mind and behavioral pattern are conveyed in a ham fisted, strangely loose and unsure style. Actually, no, there’s not a pretense of even a shot at displaying any sort of directorial style whatsoever. The writing  seems absent minded and perfunctory as it hastens the plot strands along to the conclusion. The unsettling shift which occurs and the shock spurred attain zero momentum on our interest due to the tiringly straightforward depiction that displays no sense of craft. 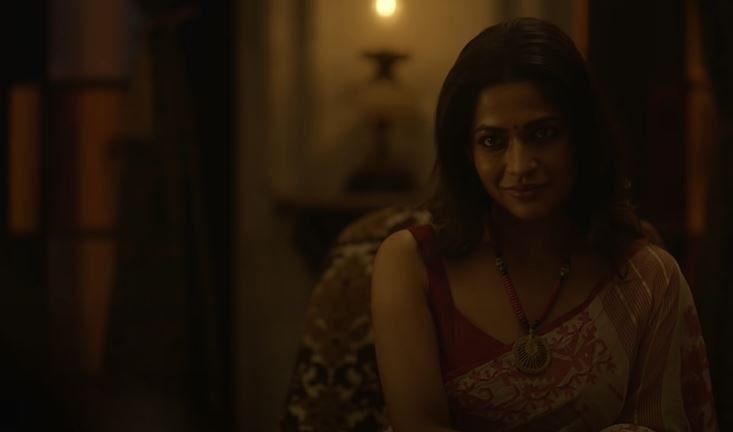 Mukherji never succeeds in conjuring up a modicum of suspense and the proceedings strain to accrue any air of intrigue in the figuration of Mushkaan and the restaurant, even as the background score insistently clobbers the viewer, ferociously and unrelentingly announcing the required throbbing tension and the delicate minefield belying each circumstance. In one scene, there are these cops who are watching a burning mansion in a position of detachment and indifferent passivity; the series produces a similar state in the viewer who just couldn’t care less. The big conversation between Nirupam and Mushkaan that runs through the final few episodes needed the thrust of sharp writing that would have the viewer fixated in an uneasy state, but the scenes feel more like a slog, a rite of passage than anything close to taut situations pregnant with precariousness.

The banal dialogues are exacerbated by Bose’s and Badhon’s direly poor performances, none of whom achieves in locating the necessary tonality of the scenes. Expectedly, only Anjan Dutt is the solely watchable actor but his sober performance almost strikes a note of sympathy for him in the viewer as he is trapped in an unmitigated mess where he does not have much to add to. The final sections of the series rush seemingly major tangents of revelations and the denouement does not feel earned or thoughtfully fulfilled.

The episodes are uninventively titled after Rabindra Sangeet compositions, ranging from Tum Kon Kanoner Phool to Kalo Horin Chokh to Tobu Mone Rekho. Shibaji Pal’s production design seemed to have been concerned in just pretty, ornate sets for the mansion’s interiors, lacking authentic detail if one looks carefully. It is all too patently broad in its conception. We get a full tour of the rooms as Mushkaan moves from one to the next, but nothing memorable, no artefact really sticks itself in the viewer’s impressions.

Sujay Datta Ray is burdened by the most ineptly directed and performed material and naturally his editing cannot salvage any of it or streamline and condense them into the shape of something that is visually and emotionally articulate. It is an impossible feat. Even the visual aesthetic (DoP Indranath Marick) seems like just any other staple Hoichoi production, the lensing offering a fatigued sameness, occasionally some shots teetering to the outright inexplicable.

At one point, Mushkaan sets fire to the house as she literally sings, “Aaguner Poroshmoni chonnwao praan e “. Honestly, how can you take any of this seriously?

All U Need is Love [2021]: 'NYAFF' Review - A Quarantine caper solely for Hong Kong Cinema Enthusiasts