Once the pandemic hit, basically everyone was obsessed with shopping or stocking up their houses with essentials or reading up as much as they could about the pandemic, a word that most may have heard whilst studying history and learning about the Cholera and Spanish flu pandemics. Whilst this struck, passions emerged as people had free time, and Vincent Kok really hit the nail on the head. He had an idea of one thing, i.e. make a film around the same, and the end result is ‘All U Need is Love’.

A relatable, timely film that pays homage to Hong Kong cinema, with ladles of comedy, slapstick double meaning humor, and an abundance of relatable messages, both in the characters and in the situation. And yes, the opening is a fast-paced one filled with stunts, leaps, and dodges that really make you get alert. Yes, suspected carriers are persons of interest.

‘All U Need is Love’ features an assortment of characters who can’t quite get along with each other. These include an engaged couple, two triad men, a group of men looking for an adventure, the hotel owner and his brother, and two hotel employees who may have come in contact with a carrier of the coronavirus. 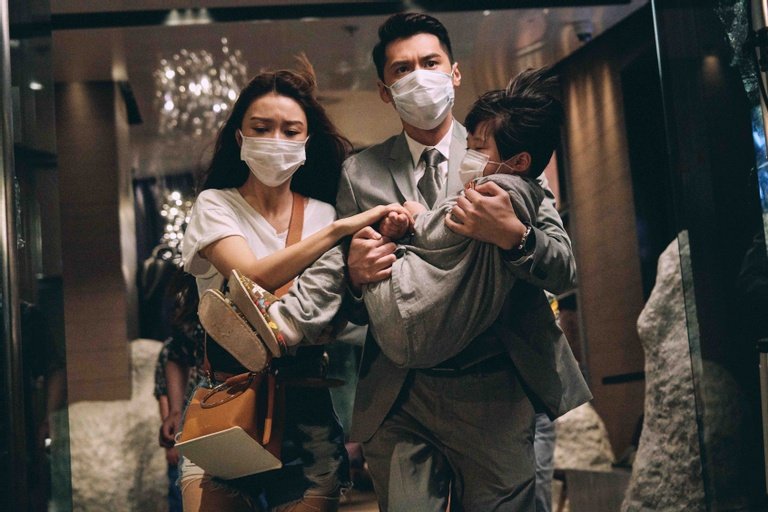 Now, given the title and the explanation of these characters, it’s quite clear that they won’t be far away from each other and make it to the climax as two individuals who are on a different page. Also, let’s be clear that this is not an anthology as all their paths intertwine. It is this journey that lets All U Need Is Love thrive.

All U Need Is Love will delight lovers of Hong Kong films, as a few characters reprise their roles from previous films- one of their wives of one such character, like in the original, is in Bangkok. A film incorporated into a film? It’s almost like a special appearance crossover of sorts.

The sight of this will undoubtedly draw attention to those films as well and give them a new following. Bollywood lovers may think of Rajnikanth’s Chitti appearing in the film RA.One. Well, it’s exactly like that. Now, this line may be panned.

It’s almost as if Kok intended crossovers. Furthermore, for international audiences who may not recognize the talent, one international star and icon of Hong Kong cinema is present amidst the ensemble. He, too, pulls off an appearance, paying homage to the typical typecast character he essays, even though the film didn’t really have a need for a stunt (or rather an over-exaggerated stunt).

The writing is something that struck me and, well, you can’t blame me for this. I’ve always been fascinated with the adaptation of traditional lines to something more pertinent to the situation at hand. The Miranda rights get adapted quite creatively by Vincent Kok in All U Need Is Love. Also, Gabriel Garcia Marquez’s novel comes to mind at one instance with its not-so-subtle reference. I felt that that reference could have been an apt title for the film.

Furthermore, the film is laced with sanitizers, hygiene, and a creative temperature gun moment. This is a sequence that, after a first glance, may have you actually anticipating a shootout. The adaptation of situations, normal practices, and prevailing practices, a mixture of them all, is something that helps All U Need Is Love stand out, but that’s about all you can love about this film.

Though the caper is amusing, light, and filled with a motley of characters, it is something that you don’t wish was a little longer so as to compel you to spend more time within its universe. There is not a lot more to look at in a positive way, apart from it being quite compact. Another 15-20 minutes of run time would have been extremely dragged and perhaps had lengthier sequences featuring the rival triad men. Chen Hsiao-yun’s music is quite fun and amusing as the background score for these sequences.

Excluding the end credits, the film has an 88-minute run time and about 10 minutes at the start and end do not exclusively focus on one of the sets of characters. 70 odd minutes and five sets of stories? TV episodes are longer and focus on just a limited number of characters.

While Kok dedicated an ample amount of time to each set, one may feel that it was too rushed for a film. Like they found themselves too quickly. On the other hand, dragging it may have been too much of a stretch. Also, eliminating a few sets of characters would have ruined the films modus operandi i.e. cramming together as many stars as possible.

Furthermore, ‘All U Need Is Love’ is in no way an apt representation of life in quarantine, as I really doubt that individuals in the poshest quarantine centers are permitted to prance around the pool area or roam. This quarantine caper is only for Hong Kong cinema enthusiasts and for audiences who have about 90 minutes and wish to watch something light, something that they wouldn’t mind forgetting after a few days. Well, you won’t forget the cartwheel scene.