I first watched The Graduate (1967) when I was 18 years old. I watched the film again several times throughout my college years. However, I hadn’t revisited the film in several years before I watched it for its 50th-anniversary release last week. It is not until now, 10 years after my first viewing, that I fully appreciate it and empathize with the main character. In 1967, you had to make choices Ben Braddock (Dustin Hoffman) had to make at twenty-one. 50 years later, one does not have to make these choices until their mid-late 20s.

The Graduate perfectly captures the disillusionment and anxiety that can come with having to make the choice to enter a society that the previous generation has built for you and take it as a concrete norm, conformity. In a scene early on in the film, Ben is suffocated at a party thrown by his parents on his return home from college. The party is attended by his parent’s friends only; there is no one there his age. His parents are wealthy, he can see his life taking shape and he doesn’t like it. They surround him and overwhelm him. He is cooed over by women and is admired, while being slightly envied, by the male members of the crowd. There are cheek-pinching and a vague business proposition. Ben takes it in quietly and politely and with a slight pinch of dry wit – it is a fabulous performance by Dustin Hoffman in his first major screen role. All Ben wants is to be alone with his thoughts. He hides in the sanctuary of his room until Mrs. Robinson (Anne Bancroft) intrudes with a proposition of her own. She will not take no for an answer.

The very definition of a cougar, Mrs. Robinson shows Ben a life outside of the norm. It is something he craves but is too ethical and reserved to pursue. She manipulates his innocence and in turn, he finds his sense of rebellion deep inside of him. Ben drifts, sometimes literally, in between the social construct set up by his wealthy family and the thought of being outside, represented by Mrs. Robinson, who herself seems to be defeated by her own bourgeois lifestyle. Ben is told by his father at the beginning of the film that the world is his oyster. He is weighing up his options. Soon enough he is taking too long about it. His parents bug him to get a job, settle down, get married, or in the words of David Byrne, ‘This ain’t no party, this ain’t disco, this ain’t no foolin’ around’. 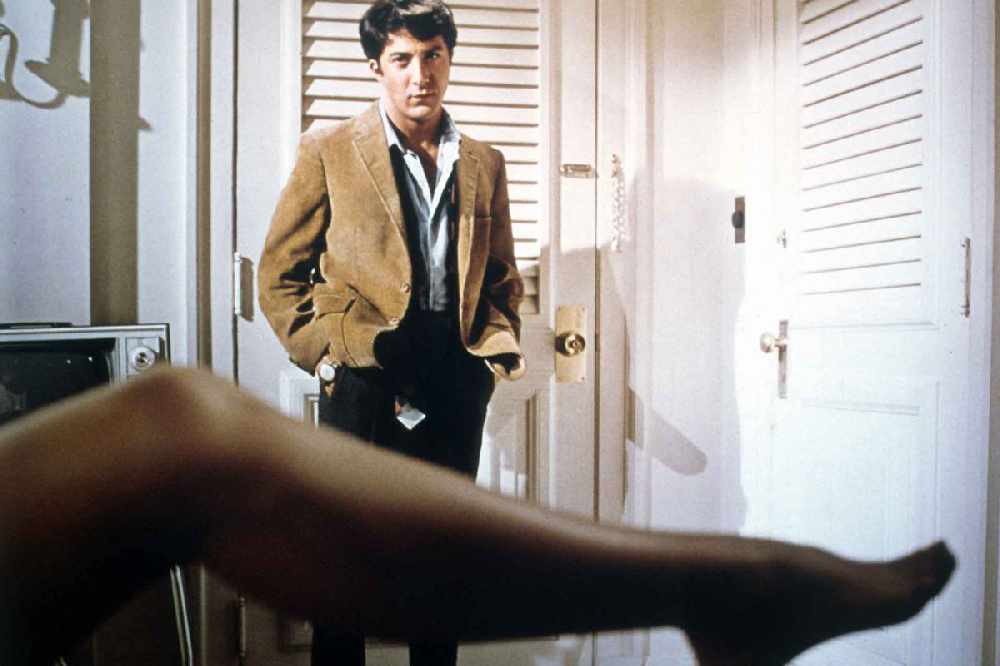 Ironically the girl that Mr. and Mrs. Braddock (played by William Daniels and Elizabeth Wilson) have in mind for Ben is Elaine Robinson (Katharine Ross), the daughter of Mrs. Robinson. This causes innumerable problems for Ben. He is forced by his parents to take Elaine on a date and is warned not to by Mrs. Robinson. Ben is between a rock and a hard place, not least when he ends up falling in love with Elaine. The plot of The Graduate teeters on the absurd but its satire is biting. It comes down to its witty script, deadpan performances, and its now iconic direction from Mike Nichols. The direction, along with Hoffman’s performance, slowly lets us into the quietly intriguing character of Ben. Nichols shows us a painting of a sad clown as Ben descends the stairs in his parent’s home, signifying his concealed depression. Hoffman’s awkwardness during a hotel liaison with Mrs. Robinson makes Ben’s extreme self-consciousness palpable. The delivery of the line, ‘Mrs. Robinson, your trying to seduce me’ lies somewhere between mental confidence and emotional insecurity, which makes it so hilarious.

The Graduate is a bildungsroman that can speak to any generation. For all her faults, Mrs. Robinson showed Ben the crack of light through which he pushed, leading him to become an unwitting counter-culture hero. The ending is farcical, potent and unforgettable.

Le Samourai [1967] – Style over substance is not always bad, if you focus on the details