The Odd-Job Men follows three blue-collar workers, Moha, Valero, and Pep, tasked with the responsibility of repairing systems and equipment. Moha is the youngest to join the force while Pep is contemplating retirement. Valero, on the other hand, is caught between two compromising situations in which he has to accept a new partner and embrace the departure of the outgoing one.

In a painfully humorous scene somewhere in the middle act, Valero tries to make a case for his identity, which he finds dominated by his physicality, even though he wasn’t in a hostile environment. In another sequence of the climax, Valero finds himself in an actual hostile environment, although a bit distant due to his language barrier but the usually chirpy and fussy guy sits quietly in a state of satisfaction.

The sequences do not serve a metaphor deeper than what their visuals allow but they render a sense of satisfaction to the viewer. On another hand, we have Moha, an immigrant, whose insecurity stems from his ethnic identity but he wants to make his case through actions and not words. Two individuals rowing the same boat in the same direction but at different paces due to the difference in their urgency and a lack of synergy.

Insecurity is neither a virtue nor a vice. It is not anomalous but universal, and its origin only validates the diversity of human form and experience. But the luxury to overcome it is not equivalently available to all. Some are in the constant drill of procuring resources from work and whatever makes them insecure keeps on accumulating. Such men can be often found pretending, attempting to justify their behavior and to make the other person(s) believe that there is more to their existence than what they (or others) perceive to be their flaw. It is very likely that such men find themselves cornered in the presence of “complete” people.

Neus Ballús’ little film is a comedy that doesn’t philosophize the routine mundanity of its blue-collar protagonists. The most it does is to establish how every individual in the world is constantly trying to validate their existence. She keeps her storytelling grounded, and the film functions like a telefilm at times. She had umpteen opportunities to adopt a voyeuristic gaze and operate around the screenplay much like Farhadi so that The Odd-Job Men becomes about its class and crisis. She doesn’t choose that to maintain the comical tone of her film, which, albeit entertaining, fails to be exciting for me personally. 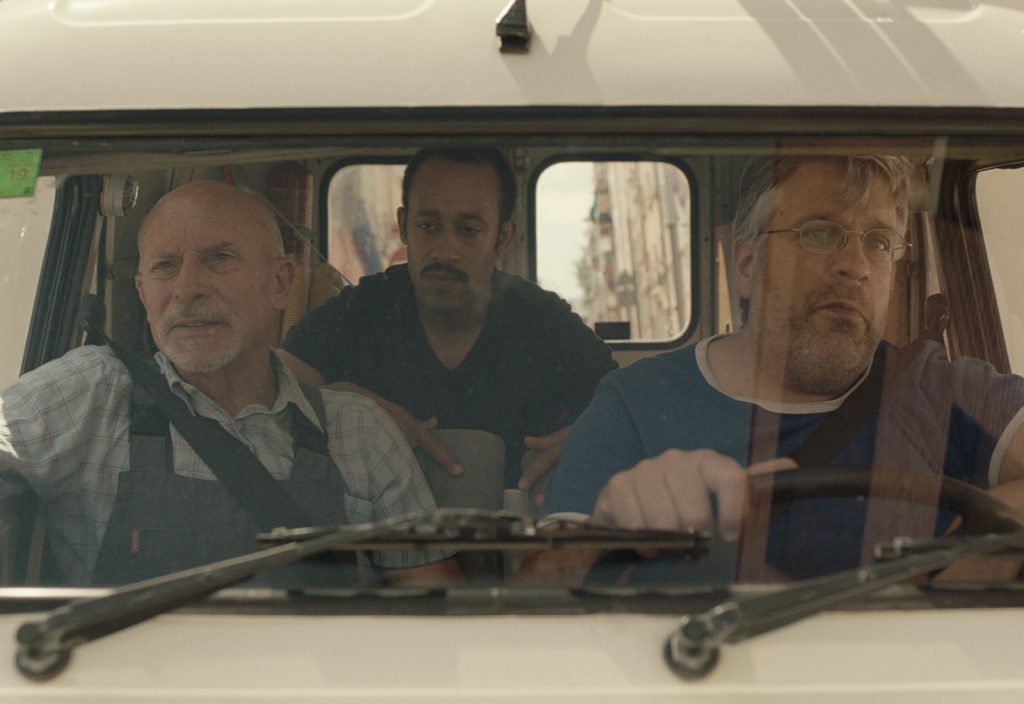 The crew performs admirably, especially Valero Escolar, who deserved greater concentration as a character because his conflicts were established throughout the runtime in portion and they were substantial enough to be explored. Valero could have also been the protagonist in this narrative and his gaze would have been conducive to the creation of black humor. We instead have Moha operating as the narrator and the one who provides us with his lens as we tread this urbanscape.

It is often unfair to criticize a film for something it’s not than for what it is but what it also means underutilized potential. Moha struggles into his confrontation with this new world with new people and languages but his identity crisis doesn’t get the focus in a narrative that must have harbored it. After all, there’s more to the lives of these men than the odd jobs they perform.

One interesting takeaway of The Odd-Job Men is its brief commentary on the social alienation that has ensued due to the individualistic urban planning focused on accommodating as many as possible in as little as available. The film looks at people disconnected from each other, congested in spaces, and forever aspiring to break free from their current position in the hierarchy onto the next higher one, which is also more exploitative of the world in general. Even in such situations, people can be seen fighting diverse battles but living in the contentment of the capital available to them. There is potential in each one of us to be happy. Similarly, there is potential in each one of us to make others happy irrespective of our own anxieties, insecurities, and inefficiencies.

It would also be unfair to not mention the episodic cut of the film that examines a standard week of the humdrum our protagonists are subjected to in order to paint a picture of the larger sample that life is. It can’t be another way. Examination of a single day would be inadequate whereas the screenplay can’t be stretched into a month or year without the introduction of additional conflicts.

The Odd-Job Men is not one of those imperative titles that warrant immediate attention but it is nevertheless a pleasant affair that one must check out if a dramedy is a priority.

Dusk Stone [2021]: 'Venice' Review - Like a Bedtime Story, Magical and Comforting at the Same Time