Blinded by the Light is now streaming on Netflix

Just the other day, a friend was telling me about his further plans. He was building his own escapist fantasy of going abroad for studies. Although quite optimistic, he seemed hesitant speaking about his survival there, as an Indian. And then, he started speaking about how things haven’t changed as we would like to think. His cousin, who’s happily married and living there on a plot of her own, still hasn’t gotten the level of acceptance we presume we would get. ‘Blinded by the Light’ tries to speak along the same lines. And the shackles bounding us are not just on how ‘they’ perceive us, but also about what we believe to be our own identity.

Based on the real-life British-Asian journalist- Sarfraz Manzoor, the film tries to tie a narrative for how the Pakistani values keep Javed (Viveik Kalra) from finding ‘his own voice’. Born and brought up in a Muslim household from England, he’s quite shy and reserved while expressing himself. Even when a white school-mate introduces his new girlfriend, Javed awkwardly tries escaping that conversation. Not exactly because of any particular anxieties but because of an internalized fear of values embodied in his upbringing, the ones that didn’t let him – have fun with the girls.

With his religious and hardworking parents, he lives in a house while sharing those morally-bound ethics with his two sisters- Yasmeen and Shazia. Despite having an obvious leaning towards writing, Javed hasn’t gotten beyond writing simple lyrics for his friend’s (Matt’s) band. But his words never resonate with that white friend or particularly appeal him. His ‘depressing’ lyrics hold him in shackles, which hardly let him have any identity other than being a Pakistani immigrant. And again, how could he perceive himself as anything different when he’s consistently reminded by the racist bigots, of being a ‘paki’?

His whole outlook remains in this self-engrossed paranoia, as a result of that. Is he really just another geeky, prodigious and lenient kid or is he able to rebel against his own parents? He struggles to find that answer. There’s hardly any room for curiosity where he’s heading though. Almost anyone can predict that this boy is going to get over all of his troubles. I mean, who wouldn’t want him to get out of his misery? 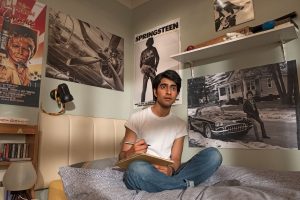 With that predictable trope, the film somehow manages to ponder over Javed’s need to look beyond his own troubles in order to connect with the others and eventually reaching to a more mature understanding, beyond his individual dreams. But the script fumbles on several clichéd tropes before reaching that conclusion. Be it a Sikh friend from his new school who seems to be there just for his mental growth or a rebellious student-activist Eliza standing by his side, every side-character merely serves Jordan’s character arc. Even with Hayley Atwell’s believable performance as his English professor, one can’t help but wonder what other jobs she is given other than showing him the affection.

Not just characters, but the situations are too archaic. Maybe taking life-decisions according to parent’s wishes will be a new concept for the western audience. But there’s hardly anything to discover for an Asian viewer who has seen the same pathos being depicted several times, or even better like that of Farhaan’s character from 3 Idiots. When the whole scenario of your film runs on such fuel, there’s a chance it would wear off too soon. And it does get tiresome. Despite that, there are certainly a few attempts of showcasing the hardships of living as immigrants. It gives his family, a little more sympathetic arc, who would rather tolerate every bad thing than speaking against anything. They still cherish individual identity as Pakistani more than trying to fit in with the new culture.

Similar Read: LÉA & I NETFLIX [2019] REVIEW: YEARNING FOR THE ALTERNATIVES AND A BETTER LIFE

Between such elders who aren’t comfortable being called out as British even after raising their children in the country, Jordan’s identity-crisis does sound alarming for the narrative. But as a film in 2019, it oddly feels a little too late to tell a story like this.  He starts identifying with other people; the ones he thought do not suffer at all. With his words and raw feelings on the paper, he makes even a lonely white neighbour empathize with him. He reminds that veteran of the injustices that he fought against.

A British person fighting against injustice is not something I can easily digest, because of the way I have been raised. Jordan and his parents embrace the same prejudices.  He repeatedly comes across such motifs, the ones which allow him a window out of his confined world. In the same way, a US-born Bruce Springsteen breathes life in him, gives him enough confidence to stand up for his beliefs. With regard to that, the heavy inclusion of his music tracks in the film doesn’t bother much. In fact, it levitates most of the script with the required energy. But that leaves the film more into becoming a 2-hour Bruce Springsteen musical than being about British-Asian guy and his realization. With that, Blinded by the Light strangely feels like a wannabe-Sing Street without the necessary subtext.

Blinded by the Light Netflix Trailer