Better Call Saul Season 6, Episode 12 Recap & Ending Explained: As we reach closer to the end, the hits just keep on coming. All the positivity and jovialness of the first half of season six have exhausted. The sound of success and joy is drawn out with a gaping vacuum and damning silence where lost souls search for remnants of themselves. The universe of Better Call Saul has never been this stark. There is no way out for Saul now. All doors are shutting close except the one that leads to D-day. Judgment is nigh for all that has done. “Waterworks” truly lives up to its name. This episode also has some of the finest acting the show has offered and that is saying something. Rhea Seehorn is back one last time. She couldn’t have left Kim with her dignity in the mud. Bob Odenkirk has discovered shades of Saul that he previously hadn’t. An Emmy seems imminent for both of them.

Although what we will see in the episode is downright heartbreaking, it is also a sort of an expose of their lives; of the kind of persons, they really are. The ending sets up the show’s finale temptingly with a sense of dreading foreboding. It was a prophetical conclusion that points in just one direction. And it is not so good. Enjoy our recap and ending explainer of Better Call Saul’s season 6, episode 12.

Through a reflection on his degree in law, we see Saul playing with a jump ball. Francesca calls him and says that he must begin work. She will not stay beyond 8 and given how many clients are waiting, Saul will have to manage. One of the fake pillars in his office falls down on the table. For an instance, we feel it might do damage. But it is hollow and showy: just like Saul. A look in the mirror in his drawer and he set to take in the clients. A surprise awaits him as he opens the envelope on his desk. “Petition for Separation”. He incredulously reads the words, slowly hanging back to reality. “Send her in already!”, he screams. We witchy back to black and white again. This time, we are in Florida, not Omaha. A brunette middle-aged woman cuts potatoes. It is Kim in her long-jeans skirt and summer top with a completely different hairdo.

In walks a man with groceries. The couple has a barbecue with some of their “friends”. Kim tries to mix in with the other housewives and miserably fails. She is trying to hide underneath the skin of everyday, common American women having a normal life. But not really. Kim is lonely in the truest sense. Her “boyfriend” has the customary love-making session after the barbecue and leaves. Kim still lives alone, somewhere carrying the burden of the past jostling with the decisions she made. The next day, she goes to work: Pal Coast Sprinker, an irrigation and water equipment company. It is nothing too fancy. Just your run-of-the-mill local operation with a size big enough to seem significant.  “Catalogs and Brochures” is where she works now.

What a drab. The fingers and mind that once argued the complexities of law now with learned judges sit in front of the computer and arrange brochures for pumps and sprinklers. Picking and dropping pictures into little squares and showcasing her creative flair on odd occasions is almost an insult to the Kim Wexler we once knew. How can she even bear talking to the co-workers at lunch about ecstasy and crack? How does that not suffocate the life out of her? The glacial, non-confronting pace of the office is no match for the hustle of the courthouse.

Tammy, whose birthday celebrations are coming up next in the office, attends a call from Viktor St. Claire. Kim draws the blinds, closes the door, and takes a deep breath. We almost see a repeat of the last episode where we cannot hear the conversation between Kim and Gene. But thankfully (or not), that isn’t the case here. It has been six years since she served the papers; the first shot of this episode. Kim is hardly saying anything. Gene keeps yapping about several things. When he asks her to say something, she screams back, “You should turn yourself in”. That is what made Gene mad. She insinuates his involvement in everything that has gone down since and he just cannot fathom it. He barks at her before putting the phone down. Kim rethinks the conversation and parts of her guilty conscience threaten to spill the beans. 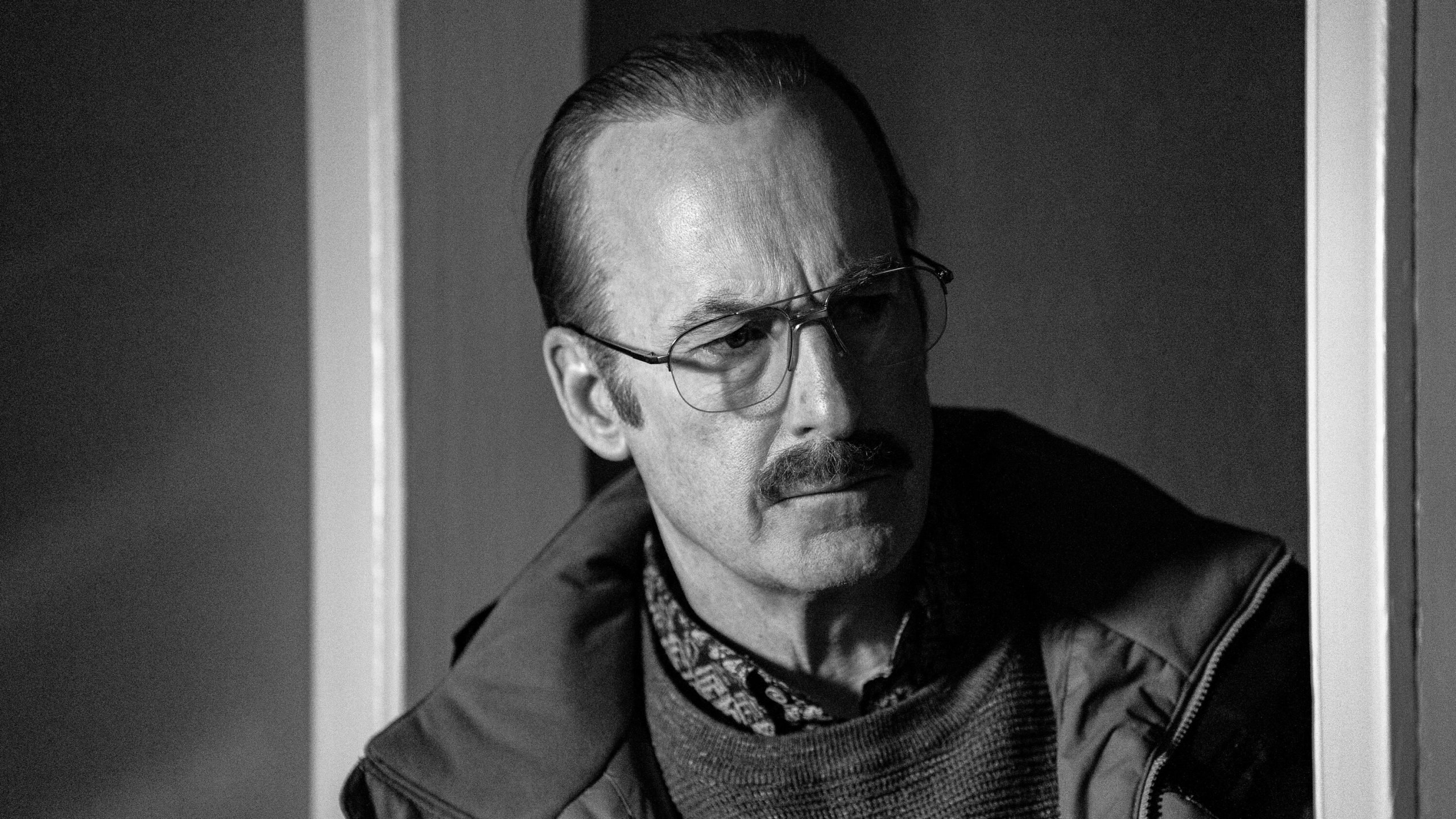 She is shocked but still keeps it all in and joins the birthday celebrations. The next afternoon, we see Kim back in Albuquerque. It gets us wondering why she has come back after all those years. She takes the shuttle to the city and goes to the courthouse. In true Gilligan fashion, we relive small moments from different episodes of Better Call Saul the journey of the eccentric lawyer from the honest, hard-working simpleton to this crazy, vicious criminal mastermind. We still do not get an answer why she is back. She goes up to the prosecutor’s office and we cut to Cheryl, Howard’s wife. She has changed her hair and still lives in the house – alone.

Kim comes in and throws a bunch of papers on the table for her to read. Now we know. The guilt has driven her to confess the truth. The papers bear it all. Every little detail of how she and her husband maligned Howard’s image; painted him as a cocaine addict; and how he was caught at the wrong place at the wrong time. With everything buried, Cherly asks Kim why now. She couldn’t take it anymore; knowing the truth and turning the other way. Kim says they will not find Howard’s body as they have no idea where it is buried. Due to the lack of evidence, the Prosecutor will not act.

She prepares to go back to Flordia. On the shuttle, everything buried from all those years – the trauma, the lies, the pain – it all comes out. She weeps like a child, bursting into an inconsolable state. Poor Kim. She was never made for this. Mike was wrong after all. She is not stricter or any more clever. She made herself think she was but deep inside, she was just a really good lawyer. And a great person. Undoubtedly Rhea Seehorn’s finest moment in this season. We jump to Gene breaking into the man’s house. He is still under the effect of drugs. Gene does what Rick (Buddy) used to do. But now that he is inside, he has a taste for more. Recklessly, he goes upstairs makes himself a drink, and veers out to check if the man is still unconscious.

Surprise, surprise, he isn’t. He grabs an object and waits for him from the top of the stairs. The man walks out of the washroom, still hungover. He operates his phone and as Gene is about to strike him, he falls back asleep. Gene rushes out, where a police car has stopped right behind Jeff. The cabbie is nervous as he watches the car in his rearview mirror. When we have a peek inside the police car, they are actually not suspicious at all. One of the officers has problems with the fish tacos he has for dinner. Jeff suddenly starts his car and bumps into a parked one. Now the officers have to get out and investigate.

We cut back to color and the day when Kim served the papers. She comes inside and signs them; so does Saul. He doesn’t talk too much, nor seems to be interested to know Kim’s circumstances. With his feet on the table, he asks for her remarks on the office layout. He bemoans her not taking the part of the Sandpiper money owed to her. “Have a nice life, Kim” is all he says before burying himself in another file. He doesn’t even look up at her. Kim shakily takes a deep breath and does not say what is on her mind. She walks out and sees Saul Goodman in full flavor. There is no Jimmy in there anymore. it is just this vile, garbage can of a lawyer who likes getting people out of trouble for money. If the price is right, Saul can do it.

Kim walks out and it is raining. She waits for it to die down. There is another man waiting under the shed. “Hey yo, could I bum one of those?” he asks as Kim lights a cigarette. It is Jesse. Pinkman. He has another cameo and recognizes Kim when she fought a case for one of his buddies. He asks her for advice on Saul. Badger, who is in trouble, needs a good lawyer. Is Saul the right man? Does making a tacky commercial tag him as frivolous and incompetent? Kim takes a puff before saying, “When I knew him, he was” and walks off to her car.

Back to black and white, Gene is back home. He nonchalantly takes a glass of alcohol and watches television. He gets a call from Jeff, who is in jail. The cops have taken him in after the man with cancer walked out screaming he had been robbed. They suspect he might have something to do with it. But Gene says that because he doesn’t have any of the stolen items, police cannot implicate him. He reassures him that he will be there shortly to bail him out. Gene phones Marion and narrates the incident to her. She is not surprised at what Jeff has done but surprised at the fact that he called Gene first. Gene says he will swing by the house and they’ll go together. Marion takes out her laptop as Gene makes his way. He knocks but she doesn’t answer. He tries to go from the back door and Marion is still on her laptop, listening to something on her headphones. Gene catches a sound of that.

It is him. His advert as Saul from Albuquerque. Marion knows the truth and phones the police. Gene interrupts her and tries to convince her that he is only trying to help Jeff. He then intimidates her into not using her Life Alert device. When she says she trusted him, Gene has a moment of weakness. He lets go of the device and Marion quickly calls the service. The police are on their way and Gene scampers for cover. Will he be able to get out of this one?

Where to watch Better Call Saul