The Nothing Factory (A Fábrica De Nada) | Dir. Pedro Pinho

Shot in grainy 16mm, The Nothing Factory scathingly criticises capitalism that has expanded class inequality and plagued us with rudimentary living. It has put everyone in an indefinite suspension of a sustainable apocalypse.

“Two hundred years ago the elites of Europe and its colonial projects accepted with open arms the end of slavery. That was only due to the fact that capitalism started offering an abundance of much cheaper and skilled labor.”

One of the several significant montages from The Nothing Factory lay bare open the ugly facet of capitalism that has strangled the socioeconomic structure so hard that everything is collapsing, creating the endless catastrophe. The kind of a catastrophe that not only devours the core existence of human but also makes a society hollow from inside out with sharply defined social strata. Capitalism, that has expanded class inequality and plagued us with rudimentary living, has put everyone in an indefinite suspension of a sustainable apocalypse. Efficacious deferment of collective sinking.

During one of the most crucial scenes that started as a discussion, soon snowballed into a heated argument about capitalism, how to fight it, and if a self-management is the answer to the imminent collapse. Portugal screen writer & director, Pedro Pinho, scathingly criticises the obtrusive concept of capitalism and briefly explains the self-managing organization as an alternative but not without wrinkles. 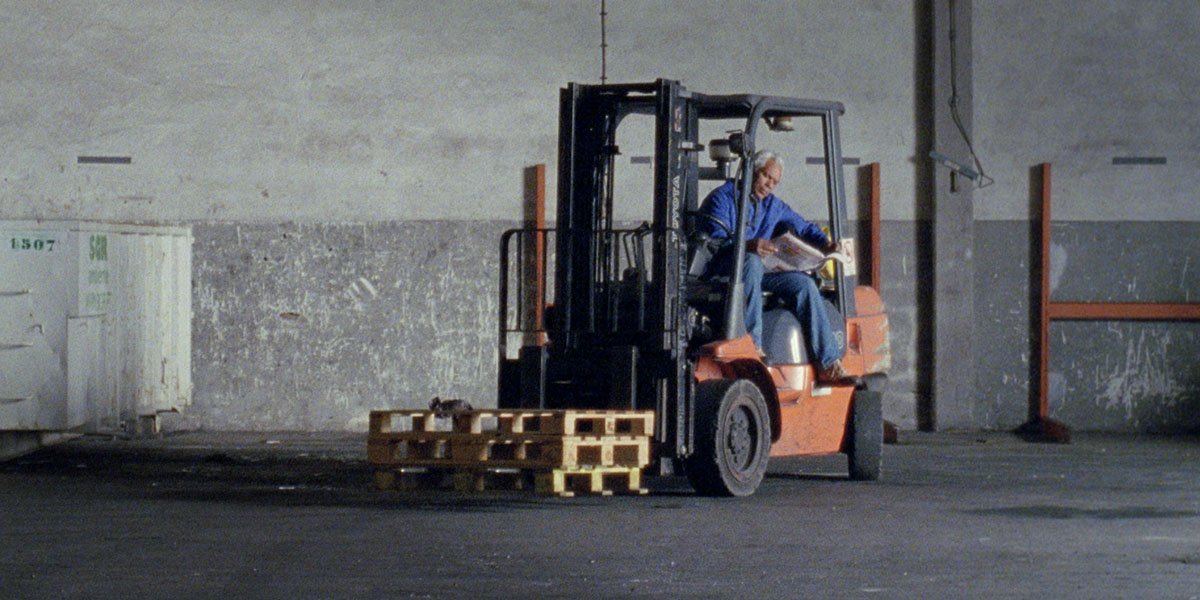 During the time when the western production houses are aggressively spending money to make a cinema “look” better and clocking them under two hours, given the constantly reducing attention span of audiences, it may seem risky move to make a three-hour contemplative labor drama – with hybrid docu fiction taste to it. But, given the somewhat resumption of the Portuguese economic growth from European sovereign debt crisis and marginal status of Portugal’s cinema, The Nothing Factory film becomes a real life metaphor for Pedro Pinho, where his film would struggle to make money among the plethora of western trash served in the name of cinema. Capitalism, you betcha!

The film opens at an elevator factory on the outskirts of Lisbon where labors gather to stop a suspicious activity happening in the middle of a night. Soon they realize that equipment is sneakily moved by the higher management of the company keeping the labors distressed about their job security. To their horror, their fears are solidified when they are offered lump-sum payments rather than proper severance pay. The emotional anxiety of running the house or finding an alternative pushes them to weigh their options. Arguments break out, they claim the working floor as their everything and threaten to go on strike in spite of nothing happening inside the factory. Pedro Pinho, who has earlier directed documentaries, offers a neo-realistic drama that thoroughly dissects every inch of the personal and social implications of the layoff labors caught in the middle of capitalism and humanitarian values. Of course, we know that the humanity has left this place a long back.

The employees do not deter from coming to the work place and do nothing. In one of the most hilarious but deeply affecting scenes, we see them doing trivial things to kill the time like staring into the abyss, playing local games, reading papers. Pedro Pinho gathers the ensemble of real life workers and weaves the protracted running length with short interludes of real-life interviews with the workers, prolong political discussion with theorists, including a tongue-in-cheek suggestion at an armed response. This textures the already layered drama and further adding the authenticity to it.

Shot in 16mm, grainy in its texture, Vasco Viana camera pans out and in to capture the detailed emotions to an intimate scale. Pedro Pinho ends The Nothing factory on an ambiguous note but what is certain here is that the chances to be a runaway hit are slim, given the dry narration that requires patience and complete immersion to absorb the moving drama. If it manages to magically appear on the streaming site, do yourself a favor, watch it. I mean it. And be little patient towards it. It’s freaking three hours long but worth your time.

‘THE NOTHING FACTORY’ PREMIERED AT THE 2017 TORONTO INTERNATIONAL FILM FESTIVAL UNDER THE ‘WAVELENGTH‘ SECTION.
CLICK HERE FOR OUR COMPLETE TIFF COVERAGE.