The Lord of the Rings: The Rings of Power (Season 1), Episode 3, Recap & Ending Explained: The Rings of Power came into the news for all bad reasons. Critics and audiences across the globe complained of Amazon’s conspiracy to keep their billion-dollar disaster floating by manipulating IMDb ratings and restricting access to viewers. Many fans of the trilogy have voiced their concerns over the show and call it a shame on Tolkien’s creative genius. Nonetheless, episodes 1 & 2 did not prove to be as bad as they’re made out to be. Episode 3, though, is a different story altogether. This episode was lackluster and seemed very farcical. The acting, writing, and lack of story development left us wanting more. With just two more episodes to go, time is scarce and a lot of questions will remain to be answered in the next season.

The Lord of the Rings: The Rings of Power (Season 1), Episode 3 Recap:

Arondir is taken by the Orcs through the tunnel they have dug up. The top part of these dug-up trenches is covered by tattered fabrics of cloth, the reason for which we will learn later. Arondir is thrown into slaving for the Orcs. He is to continue digging forward along with the othered captured prisoners. The Orcs argue among themselves about taking the next shift but one of them says they will do it for Adar. Finally, evil has a name. Arondir finds familiar faces  – including that of his Captain Revion – among the working slaves. We cut to Galadriel waking up on the ship that rescued her and Halbrand in the last episode. The man who saved her is Lord Elendil. The ship he is commanding is sailing to a special place, where a lot of history is stored.

Elendil quickly recognizes Galadriel but says he cannot any questions she has about the city and other things. Galadriel identifies the signs in front of her and deduces that they’re in the Land of the Star – the Westernmost realm of the mortals, the island kingdom of Numenor. For those who have seen the LOTR trilogy, Numenor is a name that you must have heard thousand times over. Numenor is the land where Aragorn belongs and so does Isildur, the man who cut the Ring off of Sauron’s hand. It is the most advanced, peaceful, and brightest human kingdom in the free world. Galadriel gives a bit of a backdrop as to how the island came to be. During the war, these people decided to side with the Elves. She also reveals that Halbrand’s people sides with Morgoth and when the war was won, the Valar (Elves) granted this island to the people of Numenor.

Elendil sets an urgent meeting between Galadriel and Queen Regent. Chancellor Pharazan is also present. The court is shocked to see an Elf walking the grounds of the hall. Queen Regent is dismissive and suspicious of Galadriel’s presence. The Elf demands that she be granted passage to Mille-Earth in order to fulfill her destiny. Halbrand handles the situation by asking the Queen for hospitality while she and her council mull over Galadriel’s requests. Halbrand says that he seeks a peaceful restart to his life and Numenor seems picture perfect. Galadriel warns that she will not remain confined to the palace premises and get to middle-earth in any way possible.

Pharazon then explains Regent Elendil’s past. He has a son, named Isildur, and a daughter, Earien. He is of a noble bloodline but now serves as a seas guardsman. The Queen puts him in charge of keeping an eye on Galadriel and making sure she does not cause a nuisance. From Numenor, we head straight to the Southlands, where Arondir and the others are asked to clear a huge old tree from the path. The Orcs do not themselves come out in the open and wear cloaks because the sunlight burns them. That also explains the tattered fabrics of cloth. Revion stands defiant in his tribe’s protection of the tree. One of the Orcs is impressed and offers him water. When the last of his tribe drinks it, the Orc cuts his throat, killing him. Arondir reluctantly announces he will cut the tree to avoid more bloodshed. For Silvan Elves, trees are sacred and it is a huge sacrifice for Arondir to make for the sake of the other elves. 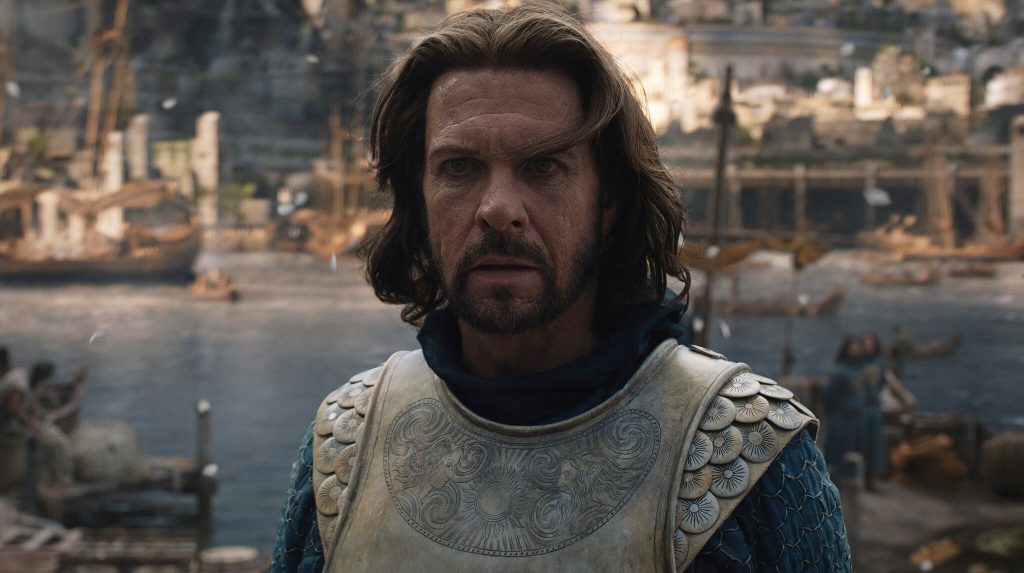 Galadriel stays true to her word and escapes the palace. Galadriel eyes a ship to steal as Elendil explains it will not be a good idea. He asks her to come with him to the Hall of Lore, where she can learn more about the vigil. They take horses to the tower, which rejuvenates Galadriel. Halbrand goes up to a welder to ask for a job. But his request is shot down as he does not have a “guilded crest” yet. As Halbrand drinks ale at the bar, a few of the men, led by Tamar, harass him. They call him a “low-man” and insult his lineage but Halbrand keeps his calm and wins them over by offering to pay for their drinks and charming them with his warmth. All is a ploy for Halbrand to steal Tamar’s crest. But he and his men discover this theft and corner Halbrand. They start beating him but Halbrand fights back. He overpowers them with his impressive skills, forcing them to call the guards and he is taken a prisoner.

Elendil mentions that the present King of Numenor is in exile in his own kingdom as he favored the Elfs. Galadriel learns a shocking truth as she discovers that the vigil isn’t a banner but a sign on the map pointing toward the Southlands. She deduces that the evil looking to follow in Morgoth’s footsteps is planning in the Southlands. For the Harfoots, it is migration day tomorrow when the entire community traverses to the Grove. Before they do that, Nori wants to help the giant man and asks Poppy for help. They need to look into Sadoc Burrows’ book with stars in it to get a better idea. She barely manages to steal some pages from it. As the Harfoots listen to Sadoc’s speech and remember the lost members of their community, the giant man stumbles upon the pages and is exposed to the community. They all vilify Nori and the Brandyfoots but Sadoc says that they will not be decaravaned. Instead, they will be traveling the furthest back, diminishing their chances of making it together to the Grove.

Isildur reveals his fascination with the Western shores from where Elendil and his family came to this island. Isildur’s wonderment is accentuated by whispers he hears from the mountains in the West. Elendil, who was excited for his son to begin training as a sea guardsman and become just like him, is bitter hearing about this development. Earien says she supports her brother and learns that her certification in the builder’s guild has come through, despite being rejected earlier.

The Lord of the Rings: The Rings of Power (Season 1), Episode 3 Ending, Explained:

Halbrand sits in jail and Galadriel visits him. She reveals to him that she learned a secret about his identity that he had been less than forthcoming about. She found a picture of the symbol he wears around his neck. It is the vigil of the house that united the scattered tribes of the Southlands many ages ago. Halbrand is the king who isn’t there anymore. In the first episode, when a boy screams that when the king of the Southlands returns, he will weed out the Elves, he is referring to Halbrand. The king in exile is suddenly woken up by Galadriel’s claims and says his lineage is more than just noble – they were supporters of Morgoth. Galadriel says that they must be united to clear the name of their bloodlines and bring the evil brewing in the Southlands to a quiet. We also see a visual of the Queen going up to her father’s quarters and informing him that the Elves have returned.

Nori and her family struggle toward the back of the line. The giant man suddenly reappears and Nori points out that he is the one to save the Brandyfoots and help them in migration, as he can tow their caravan quite easily. Fate has ordained it and Nori’s claims are proving to be right. Her heart-sense is working just fine, like Spidey-sense. In the final scene of the episode, we see Arondir and his legion of elvish warriors put up a fight against the Orcs. They intend to free themselves, bring the Elvish army to the spot, and destroy the brewing evil forces. A hard battle is fought in which most of Arondir’s men are killed. The Orcs struggle against the sunlight that the Elves use well, but eventually overpower them using a Warg. Revion is able to escape but as he begins to run away, he is killed with arrows and Arondir is the only one left alive.

Before he is about to be killed, one of the Orcs says to bring him in front of Ador. In the final scene, we see the legend himself walk toward Arondir. The evil incarnation of Sauron looks like a mix of Elf, man, and Orc. It is not quite clear yet that he is exactly that mixture but he is indeed the evil king to lead the forces of the dark once again in another great war.

Related Article: All Lord Of The Rings Movies (Including The Hobbit Films) Ranked

How Does NOPE Measure Up To Jordan Peele's Previous Two Films?