The power of "Il Posto" lies in the sharp stitching of small vignettes that makes up protagonist Domenico’s life and the lives surrounding him. Scrutinized separately, these pieces seem insignificant and mundane. But through precise camera placements and minimal editing, Olmi immerses us in the indifferent world as seen through Domenico’s gaze. 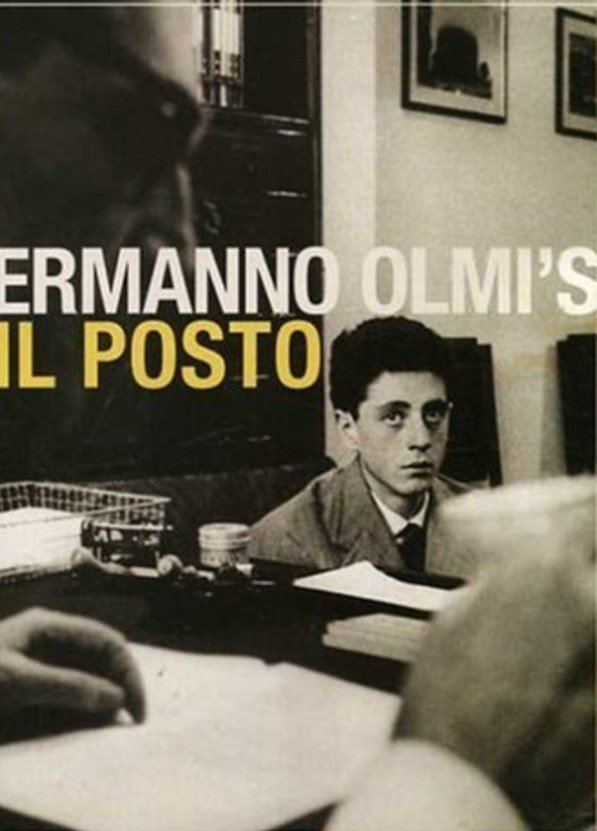 I felt an aching realization while watching Ermanno Olmi’s Il Posto (aka ‘The Job’ or ‘Sound of Trumpets’, 1961) which seems as relevant now as it was fifty plus years before. It was heartbreaking to see the innocent young man’s arrival into the gleaming offices, marked with its own set of confusing rules and hierarchies. Few years before, I had been that wide-eyed young office recruit, confined to a cubicle in an atmosphere filled with despair and fake emotions. Italian film-maker Ermanno Olmi’s debut feature Il Posto is considered to be the revival or extension of Italian Neorealism (although Olmi has claimed that his artistic tradition is different from Neorealism). Olmi transformed some of the dimensions of Neorealism movement, while also sticking to some of its aesthetics (especially the way he studies the faces and space). The early 1960s was considered to be the start of Italian economic miracle. The material standard of living vastly improved when compared to the post-World War II chaos. Multi-storey buildings raised out of rubble and the younger generation were promised with more sophisticated, office jobs. But what’s the place for humanity in this good-looking material existence? This simple question is what drives the sublime narrative structure of Il Posto.

In a career that spans more than five decades, Mr. Ermanno Olmi has crafted some of the very best character studies, filled with sumptuous details of everyday life. The lives of Olmi’s characters are marked with quiet desperation, hope, irony, and inanity. His extraordinary skill lays in visualizing the hum-drum life  in a beautiful and emotionally resonant manner (Mr. Olmi did the camerawork for Il Posto). When we first see our young protagonist Domenico Cantori (Sandro Panseri) he is safely tugged under the bed covers, trying to steal in few more minutes of sleep. The father, a manual worker, gets ready for another working day as the mother prepares the food. Domenico has the usual verbal fight with his younger brother Franco. The day’s events may determine Domenico’s near-future since he is about to attend an interview for the clerk post in a Milanese firm.

Domenico heads off from his parents’ home, situated at the provincial town of Lombardy (director Olmi was born in this town). The long route Domenico takes from his home, set among agricultural lands, to the corporate building makes up for one of the splendid scenes in the movie. Dressed in a over-sized coat, the shy lad with moony eyes, in pursuit of a ‘secure job’ first walks behind a horse-drawn cart, then hops on to a train. The scenery gradually changes. In his walk to the firm, Domenico is surrounded by more rigid structures. The visual composition elegantly emphasizes on the constrained space inhibited by the colony of office workers. In this detour through the long hallways with high ceilings, adorned by chandeliers, Domenico seems to feel little happiness. He is finally away from the tedium of home life and slightly escaped from the oppression of parents. 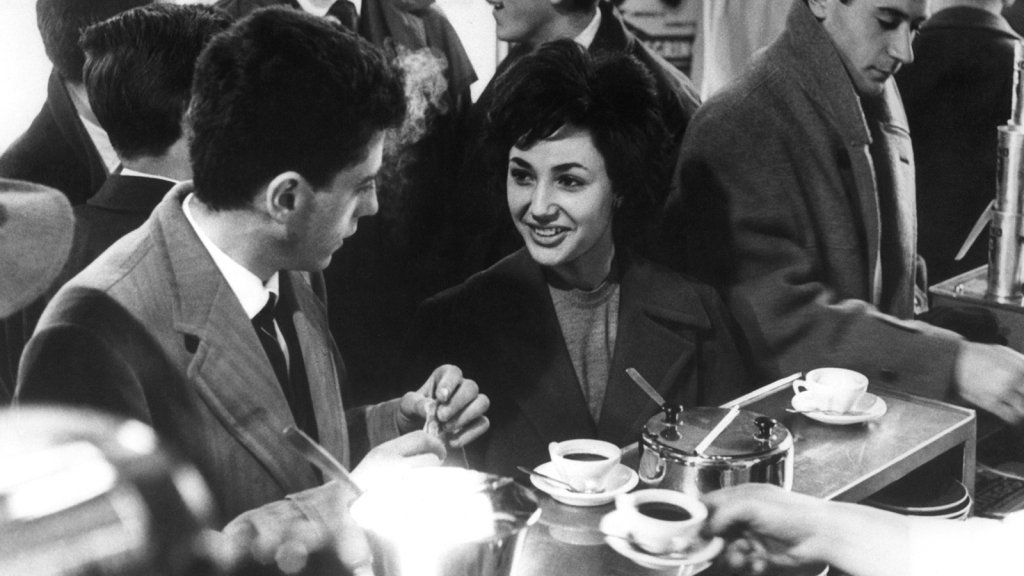 The interview in the firm commences with aptitude test (to solve a simple fraction problem), physical check-up and a psychological test. During the lunch-break, Domenico strikes up friendship with an angelic girl Magali alias Antonietta (Loradana Detto – she married Olmi in 1963 and never acted in a film after Il Posto). She is applying for the typist job in the same firm. Domenico’s timid looks, Antonietta’s soft smiles, their window shopping and detour into coffee shop makes it seem as if the initiation into adulthood is going to be less difficult for them. They both eventually get the job, but unfortunately placed in different departments. Domenico is sent to administration building as a messenger. The varying lunch-breaks and shifts don’t even give the guy a chance to meet Antionetta, except for the fleeting occasion he sees her among the male co-workers. As Domenico gets settled into the familiar beats of routine office life, the very familiar alienation and loneliness too sets in. He is desperately trying to make the best out of the new environment where humanity is shredded to pieces by the drudgery.

The power of Il Posto lies in the sharp stitching of small vignettes that makes up Domenico’s life and the lives surrounding him. Scrutinized separately, these pieces seem insignificant and mundane. But through precise camera placements and minimal editing, Olmi immerses us in the world as seen through Domenico’s gaze. Director Olmi excels in capturing both the lifelessness of the rigid architecture and the fleeting emotions in the face. The medium and close-up shots of Domenico’s face exude a subtle power. Through the smirks, blushes and dejected looks of Domenico, we closely observe his passage into adulthood. Back in the day, it is cited that critics renounced non-professional actor Panseri’s passive performance. But there’s nothing bad about his acting. His shy nature and bewilderment would be very relatable for modern white-collar workers, serving inside the pitiless buildings. The whole movie is a brilliant study of the young man’s emotions and psychology as he enters into mysterious, unknown world.

If one has the patience to sit through the slow narrative, a lot of fantastic as well as devastating visual expressions could be found. The huge buildings Domenico walks into is filled with empty spaces and very few human beings, but when he enters into the little waiting room the place is filled with people in neat dresses and fake smiles. Domenico immediately shrinks (literally and emotionally), intimidated by the tiny room and fellow competitors. In the breezy scene, when Domenico buys espresso inside a lively café, the man behind the counter serves it, adding a word ‘sir’. The young man smiles after hearing this simple recognition. Moreover, Antionetta and Domenico’s irrational happiness injects hope amidst the relentless noise of industrial progress. Most of the narrative is pressed with such graceful moments, which all adds emotional force to the guy’s induction into the Kafkaesque world. 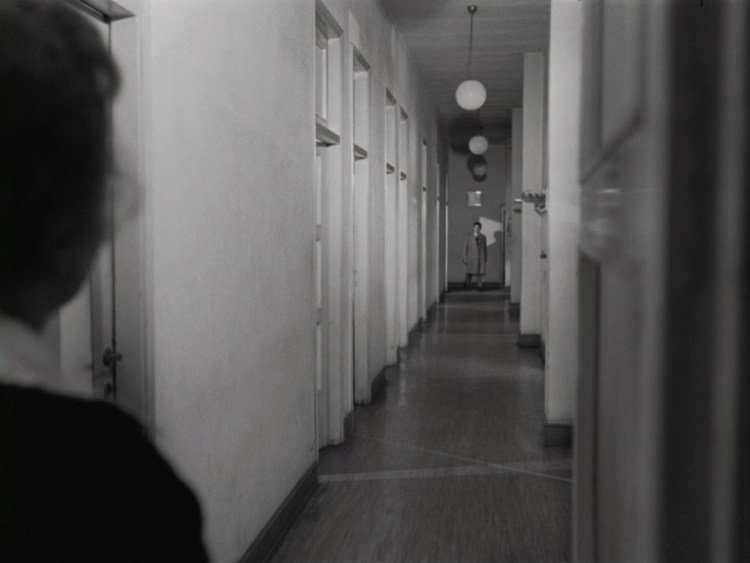 Olmi’s study of alienation through architecture and its intrinsic simple elements is sort of similar to Michaelangelo Antonoini’s examination of landscapes. The narrow waiting room, stairs, bland walls, big-sized window in the top bureaucrat’s office, the over-head light, and the little lamp conveys how Domenico’s world is getting narrower, day-by-day. In one of the many sharply expressive scenes, we see Domenico sitting opposite a typical, elderly bureaucrat. The slight elevation and the giant desk itself emphasizes on the protagonist’s tremulous emotions (in this iconic shot, Domenico’s face only appears at the edge of the frame). The most surprising moment of the movie is when Olmi leaves his young protagonist to showcase the lives led by the workers, beyond their office desks. In those fast moving vignettes, Olmi establishes how their stifling work style has a fierce hold in the life beyond office hours.

Although the quiet desperation of Domenico brings in painful emotions to confront, the narrative is perfectly balanced with incredible tragicomic moments. Domenico’s eyes reflect the hushed despair seen in the eyes of yesteryear, silent movie comedians. The young man repeatedly running into older women or the episodes involving old, retired office worker returning to office out of habit, the false paternalism of co-workers, and the extended sequence of New Year Eve Party (arranged by Employee Social Club) are some of the occasions when the banal becomes a very efficient tragicomedy. The characters in the party scene are as noisy and greedy as those in Milos Forman’s Czech black comedy Fireman’s Ball (1967). The sight of Domenico with his blowout whistle and the champagne bottle (consolation prize for being without a date) brings load of laughs. Quite often in the movie, Mr. Olmi proves he is adept at shifting between different environments. He cuts from the merriment of party to the claustrophobic office. What follows is a powerful ending and one of the greatest final images (as majestic as the final freeze-frame in Truffaut’s 400 Blows) in the history of cinema. In an earlier scene as Domenico travels from his home to the firm, his face is lit by soft sunshine. At the ending too his face is brightly lit (may be a lot brighter), but there’s less hope in it. The clatter of the machinery in the background and the bundled-up personal notes of the deceased worker leaves us to reflect back on our existence inside the shiny, sterile, but cold corporate offices.