Home»Reviews»On Body and Soul [2017] Review: The Dream and The Dreary
Reviews

Mesmerizing, murky and mystical – these three words stand for how my experience of watching the 2017 Hungarian film On Body and Soul was. Standing at a crossroads, when there is a serious content crisis in world cinema, director Ildiko Enyedi comes back to feature filmmaking after a long hiatus and gives us a stunning film, worth discussing. The film has loose ends, which is up to the audience to put together, but never loses its way amidst mindless narration and distasteful dialogues.

Each character in the film speaks in a measured style, maintaining a delicate economy of words. The central figure of the story is portrayed by a reticent yet expressive girl named Maria. Maria initially comes across as weird, unapproachable and unusually taciturn. But, gradually as one helix intertwines with another, Maria exudes a remarkable change in her behavior. She forms a special relationship with her workplace superior, who is again a soft-spoken, aged man with a salt and pepper beard. This man, Endre, with one dysfunctional arm, had kept Maria in his radar from the very first day, who had been conspicuous by her unconventional ways. It was when things were flowing without much undulations that theft at the slaughterhouse they were working in, came both as a boon and a bane. It was merely a chance occurrence that they came to learn that both Endre and Maria share similar dreams. A thunderbolt masquerading as a snowfall, this epiphany caught both them unawares and made them inquisitive. Both of them started desiring to learn what the other was dreaming of, and hence came uneasily closer, much to the discomfort of their colleagues.

Must Read: On Body and Soul [2017]: A Whimsical Atypical Romance

Now, coming to the most soul-stirring and exquisite part of the film; the dream sequences. A stag and a doe are shown sauntering around on a snowy ground, dotted with small streams and greenery peeping out from the canopy of snow. They drink water from the streams, touch each other, run around and frolic. But, for some reason, they never mate. This is what both Endre and Maria have been dreaming for quite some time. The sequences are absolutely magical and beautiful beyond expression. Evocative cinematography adds to the lugubrious yet overwhelming emotions induced by the sequences. The most remarkable feather on the cap of On Body and Soul is its mind-numbing sound design. At times, the visuals are completely divorced from the audio elements, thus using sound as a storytelling entity into itself. Sound has become the pivot in the atmospherics of the film, coupled with the archetypal European art-house aesthetics, and is worthy of high praises. 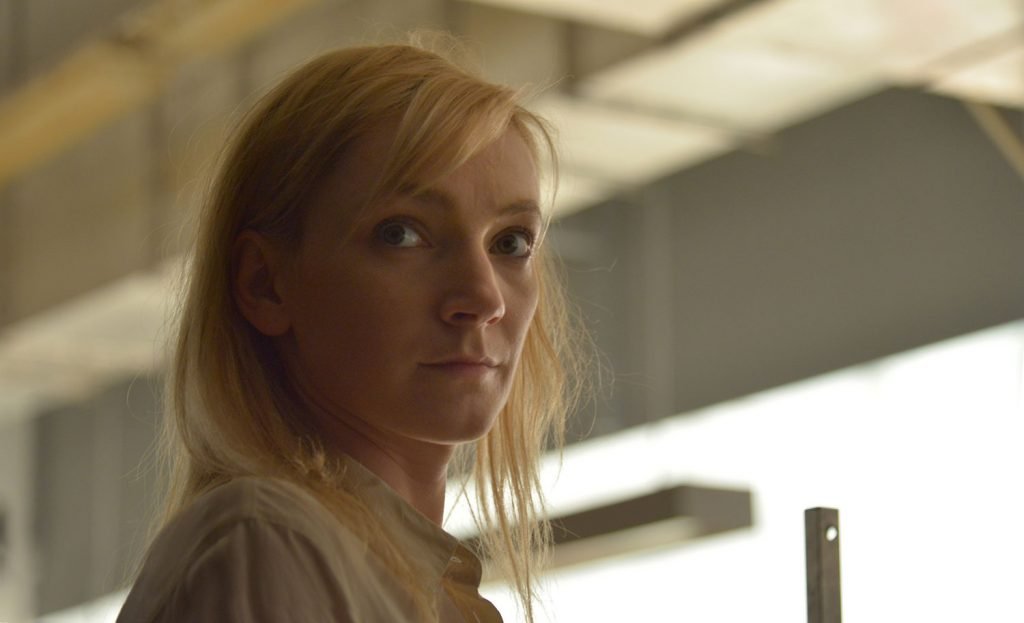 It was, as if, actions of Endre and Maria stemming from a magical and unearthly realm, in non-human forms, were craving for completion and fulfillment in the world in which they are colleagues at a slaughterhouse. Everything happens with such caustic casualness, that at times, I felt really uncomfortable. Mercilessly showing the slaughter of cows as if it was nothing to flinch about, or Maria displaying her eerily genius memory, by virtue of which she can remember everything meticulously to the most minute detail – all these seemed to be happening with stone-cold rigidity. The director seems to have a flair for reflections as there are several shots of a variety of reflecting surfaces. It is possible that such distorted images might signify the inner tempest of the protagonists.

However, the film ends on a happy and satisfying note. The relationship between the dream and the dreary, seemed to have come full circle. Judicious use of dialogues might have hindered the exploration of greater character backgrounds but has let the audience focus on the aesthetics which are terrific. On Body and Soul is soaked in finesse and draped in stellar imagery. It is definitely a must-watch for all kinds of audience; from those who have a special place for good screenplays or enthralling visuals, to those who prefer putting on the thinking cap while watching a movie.

On Body and Soul Trailer: