Home»Reviews»Film Festivals»The Locust (2022): ‘SXSW’ Review – A movie about the love of the art and its creators
Film Festivals/Reviews/SXSW

The Locust (Malakh) follows Hanieh, a forty-year-old woman who wants to make her semi-autobiographical film. But she is broke and on the verge of being thrown out of her apartment. To make ends meet, she sells her script to her best friend, who is also the director. However, the script, naturally, is akin to her child, and she wants to get involved in the production and see the makings of the film itself. And while her trying to distance herself from conflict and changes in the script goes moderately well, it starts grating on her nerves when the actors start judging the character in her script as a bastard and insensitive person, obtuse enough to not realize that the protagonist is based on Hanieh herself. It is compounded by the fact that her friend, the director, instructs Hanieh to play the character of Fereshteh, the protagonist, in the table read where the majority of the movie takes place.

The love for films and the love of the art of film-making itself, the collaborative aspect of it, the acceptance and rejection of different ideas, are sharply contrasted with Hanieh’s own precarious and sensitive headspace. She is already insecure and combative, trying not to sink into the realization that the fulfillment of her dream is not sustainable with her current financial situation. When you compound that with the fact that her script is getting criticized from differing angles but with one single source—”the character of Fereshteh is not interesting” or “Fereshteh wouldn’t do that” or “there isn’t any love here from Fershteh’s side,” all of it is taken as gradations of personal insults by Hanieh herself.

Related to The Locust – Silence (2016): An Unforgettable Journey Through Human Faith

More gently and subtly, director Faeze Azizkhani tries to show us the love affair between an author and his creation and the incredible amount of effort it requires to separate the art from the artist’s persona, and Azizkhani shows us Hanieh’s inability to do so. There are also hints of magic realism here. Her father comes to her in a semi-dream sequence and talks about how he requested and cajoled Fellini and Kiarostami to give ideas about the script to Hanieh, and he is disappointed that Hanieh chose to sell the script. Her father, who was responsible for introducing her to the cinema and inculcating that love of motion pictures in her, is now the personification of her creative side, compounded with the insecurity of ownership of her material, and maybe a part of her soul. All of these heavier and more intimate discussions are shown and conveyed via sharp dialogues of a comedic bent. The screenplay by Azizkhani herself feels very much inspired by Kiarostami, with a shade of Tarantino. Through her meta viewing of the material, Azizkhani herself references Kirostami and Tarantino as influences on Hanieh’s script, with Tarantino even appearing as a cameo in Hanieh’s movie, congratulating Fereshteh on winning the Palme d’Or. 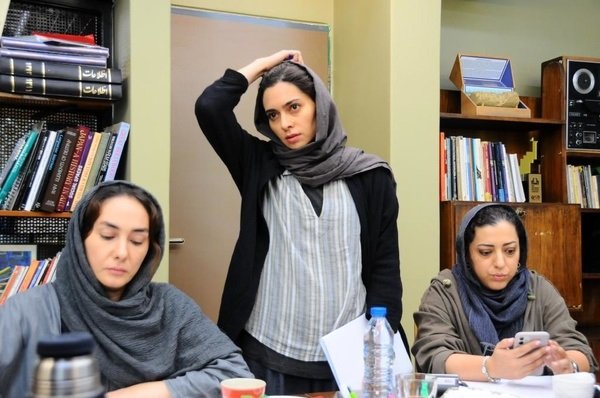 It would be reductive to call The Locust “so Iranian”, but the genre of meta cinema with its twitchy camerawork and the reliance on dialogues and non-reliance on diegetic scores has been associated with Iranian cinema for the majority. It is very Altman-esque, with dialogues overlapping at times on top of each other, but instead of raising the viewers’ anxiety with the chaos displayed on the screen, it manages to show the inherent collaborative effort required in such a large venture like filmmaking. Cleverly, Azizkhani and cinematographer Alireza Barazandeh manage to focus almost exclusively on Hanieh to the extent that most of her co-stars’ faces remain out of the frame.

The few that remain in the frame are the ones managing to push the pinprick of doubt and insecurity in her, even as she explains, via the breaking of the fourth wall, to the audience how self-aware she is. But it’s the push and pulls, the bravado and self-doubt, that brings a complicated yet endearing character like Haniyeh to life. Any creative person who had written something would be able to relate to her pain, and here the screenplay works perfectly in sync with Hanieh Tavassoli, who manages to show all the facets of her persona with ease and heft.

The movie does manage to shift genres and become a noisy family drama with elements of filmmaking and the discussions around it seeping through. During these moments, the film does tend to lose its focus but cleverly remembers who the protagonist is, the camera immediately shifting to Hanieh sitting in silence in the other room while discussions about her future almost threaten to run rampant in the foreground. It is comical, almost farcical at times, and doesn’t always work. But the pathos is evident, the struggle and love for the arts are at odds with everyday life and the societal expectations thrust on Hanieh, and the movie doesn’t end with a resolution. It just manages to show the life of an independent creative filmmaker and the hustle that will continue. The story will change, the characters will change appearances, but the attributes will remain the same. Stories can mutate, but the hint of personal touch is necessary. As “The Locust” portrays, it is difficult to divorce and be objective about your creation, and the film manages to portray that beautifully.

The Locust WAS SCREENED AT THE 2022 SXSW FILM FESTIVAL