There are two anecdotes people know about educator and social reformer Ishwar Chandra Vidyasagar. The first is his contribution to Indian society at large – the Hindu Widows Remarriage Act, 1856. The second anecdote is he used to sit below the glare of streetlamps to study for hours and prepare for examinations. These two anecdotes are the base for the premise of this 6 episode series titled Sundarbaner Vidyasagar, streaming on Hoichoi.

Kinkor Karmakar (Riddhi Sen) is introduced to us as studying while sitting below a streetlamp, preparing for his graduation exams. His father truly believes that he shares some connection with the erstwhile social reformer. However, when his disappointing scores arrive, it becomes an embarrassment to his family from a beacon of hope and respect alarmingly fast. Disheartened and unable to meet the expectations saddled on him by his family, Kinkor follows the advice of his confidant Bhuban Da and takes the job of a government volunteer in the Kumirkhali village of the Sunderbans.

The village’s prime attraction is it being populated by widows, and the BDO of the forest department tasks Kinkor to form “Sundoribahini”, a team of said widows to protect the mangroves of this area. However, when Kinkor starts to put this plan in motion, he finds resistance from village chief Radharani Devi, her aide Makhan (Shankar Debnath) and schoolteacher turned adviser to the panchayat and secret ringleader of the entire operation Kalyani (Rupanjana Mitra). They plan to manipulate the widows and commercialize their existence, instead of uplifting them.

The first heritage village of Sunderbans was the proposed plan, but the result is far more exploitative and to some extent sinister. The three accomplices have managed to keep all dissidents at bay, until Kinkor comes along, aided by Parboti (Ushashi Ray), a young widow who can see through the cracks of the upliftment sheen as sold by Kalyani and her cronies and is determined to expose the corruption at all costs. 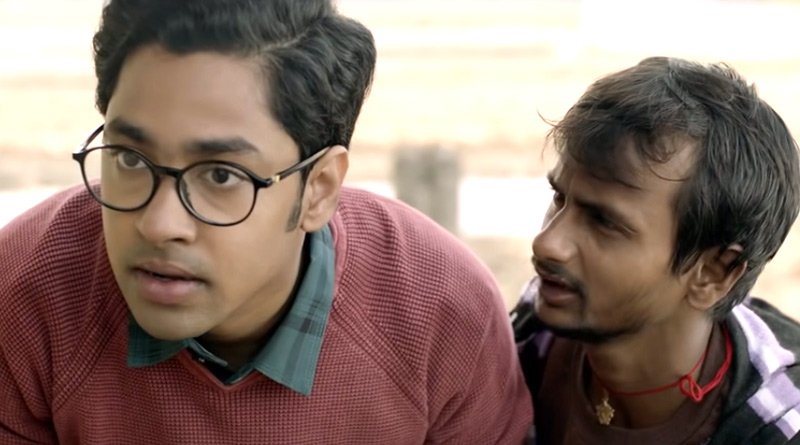 Sundarbaner Vidyasagar works primarily because of its setting and its existence. A far cry from the usual thrillers set in the urban regions of Bengal, primarily Kolkata, Sundarbaner Vidyasagar like Byadh before it comes out as some of the newer forms of content being released by Hoichoi to appeal to an audience from all spheres. More than appealing to all audiences Sundarbaner Vidyasagar also manages to tap into the stories of rustic regions like the Sundarbans and the surrounding countryside. These are regions that haven’t been given the focus or time necessary, thus variety in storytelling had been sorely lacking for some time now. This show seems like a step in the right direction, and the world-building done via the screenplay by Arkadeep Nath and directorial chops by Korok Murmu gives Kumorkhali its unique sense of identity. The show’s USP is the simplistic storytelling and the heartfelt performances.

Riddhi Sen excels as Kinkor, the insecure under-confident youth who is forced to rise to the occasions after being branded as a loser by his family and his town, and manipulated by the antagonists to leave this village. Like the social reformer he had been touted as sharing a connection with, Kinkor too manages to grow as a strong and confident individual dedicated to bringing justice to the rights of the widows. Sen sells the performance here.

As the underconfident Kinkor, Sen doesn’t speak much, letting his eyes and facial cues do the talking. When he does talk, his mannerism and voice sell the soft-spoken character of Kinkor with moments of dramatic heft and vulnerability at key instances. Ushasi Ray as the young widow dedicated to fighting against corruption and injustice even in the yoke of silence is refreshing and a different avatar from the usual characters she plays in soap operas. While she is unable to match the dramatic chops of Riddhi Sen, she is imminently watchable. Rupanjana Mitra and Shankar Debnath play villains with not many layers, but their presence and personality do manage to give the impression of suitable antagonists in Kinkor’s path to absolution.

The true winner in Sundarbaner Vidyasagar is the visuals. Instead of exoticising the Sunderbans, cinematographer Ramyadip Saha manages to capture the beauty of the locales in its rustic overtones and paint the beauty in the mundane. The sequence when Kinkor first enters Kumorkhuli at night and sees the widows performing their evening rituals, the only source of illumination being their oil lamps, is some of the most visually stunning shots in the whole series. The thrill element adds an extra level of zest, but the social message in the series is an important one that thankfully doesn’t take over the storytelling. The background score evokes the vibe of simplistic ambience with sinister undertones at moments.

However, where Sundarbaner Vidyasagar falters is in its overall presentation. There are ample commercial elements in the storytelling which does threaten to take away from its potency, the worldbuilding needed to be far more comprehensive to infuse a clearer vision of the livelihood of the widows and how they are being manipulated. The addition of an extra episode funnily enough would have helped with the pacing, instead of making the final episode be rushed, too much in a hurry to tie everything in a neat bow and thus managing to not satisfy the viewers. The resolution at the end, with the widows protesting against the antagonists in front of the minister, should be a cathartic moment. Instead, it comes off as hackneyed and unfortunately loud, a far cry from the tonality the show had been insistent on maintaining since the beginning. Despite its flaws, Hoichoi manages to deliver another interesting batch of stories in its arsenal, with Sundarbaner Vidyasagar leaning more on the parallel and interesting side of Hoichoi’s oeuvre of content.

WeCrashed [2022] SXSW Review - Strong Tommy Wiseau Energy from this one