Stanley Kramer was an active producer and director in 1950s & 60s Hollywood, his reputation associated with prestige projects like Death of a Salesman [1951], High Noon [1952], The Caine Mutiny [1954], Judgment at Nuremberg [1961], etc; gutsy pictures that were more meaningful than the usual Hollywood spectacles. Only by the mid-1950s, Stanley Kramer stepped behind the camera to direct (‘Not as a Stranger’ in 1955) and in his third directorial feature (The Defiant Ones, 1958) he tackled one of the taboo subjects in Hollywood: racism. Although Kramer’s next titled, On the Beach (1959) was one of the early American movies present a post-apocalyptic scenario (based on Nevil Shute’s novel), it was too ostentatious and talky to convey the grimness of a possible nuclear holocaust.

But the powerful courtroom drama, Inherit the Wind (1960) was Mr. Kramer’s first best directorial effort, which he followed up with his single best project in his film career: Judgment at Nuremberg (1961). Though Mr. Kramer prioritized content over style, and at times his libertarian-views-laced cinema can be annoyingly self-righteous, he was an important independent producer and outsider in Hollywood who at the height of McCarthyism firmly stood by his beliefs.

Inherit the Wind was based on real-life Scopes ‘Monkey’ Trial, which took place in Dayton, Tennessee in July 1925. The accused was schoolteacher John T. Scopes. His crime: teaching his students Darwin’s theory of evolution. Scopes was defended by the agnostic and infamous defense attorney Clarence Darrow (he secured life-imprisonment for death penalty convicts Leopold and Leob, which was one of the well-known murder case in 20th century America). Acting on behalf of prosecution was William Jennings Bryan, a Bible-thumping fundamentalist and a former Democratic presidential candidate known for his oratorial skills. The media houses of the time flocked to small-town Dayton (broadcast live on radio) to witness the intense face-off between evolution and creationism. 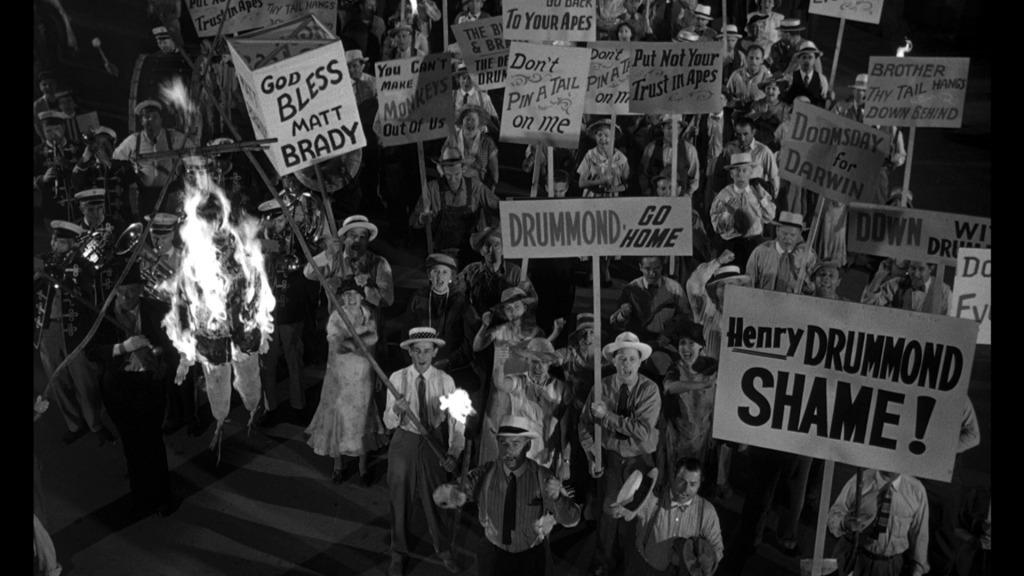 Of course, we can easily discern which side may have won without even googling for Scopes trial. But the brilliance of Inherit the Wind lies in offering the clarity of purpose as it powerfully argues for the scientific discourse and against the religious bigotry (“As long as the prerequisite for that shining paradise is ignorance, bigotry, and hate, I say to hell with it.”) The script written by Nederick Young and Harold Jacob Smith was based on the dramatized 1955 play of the Scopes trial, written by Jerome Lawrence and Robert E. Lee. For legal reasons, the names of everyone involved in the original case were changed, including the name of the town.

Related to Inherit the Wind: 5 Must-See Movies of Otto Preminger

Inherit the Wind opens at the courthouse steps of ‘heavenly’ Hillsboro, a small town deep in American South (dubbed as ‘the buckle on the Bible Belt’). A crane shot follows a man walking down the courthouse steps, and the frame (ironically) includes the statue of Blind Justice. As this man walks through the calm streets of the town, he is joined by similarly grim-faced men. Then the group enters into the public school and serves a notice to prosecute the biology teacher, Bertram Cates (Dick York) for teaching evolution.

In 1925, John Washington Butler, a Tennessee House of Representatives member, introduced a law (known as ‘Butler Act’ or ‘Anti-Evolution Act’) which prohibited school teachers from denying Biblical creationism. The law wasn’t overturned until the mid-1960s Furthermore, even in the 21st century many anti-evolution bills have been introduced in the state legislatures and United States Congress (though most of these bills are unsuccessful).

Early in the narrative, after Cates’ arrest, the influential members of the society sit around and talk. Most of the men exemplify the stereotypical small-town small-mindedness, but they also unanimously agree that the trial can be economically good for the town. In fact, the unauthentic, caricatured ‘southern’ types who fervently call for lynching Cates are a bit overdone. In reality, the Scopes trial was a well-fashioned publicity stunt, spearheaded by Dayton’s leading citizens to challenge the anti-evolution law, and naturally to turn the nation’s attention towards their little town. Scopes came forward to be put on trial, and the involvement of public figures Darrow and Bryan perfected the cause of show trial. Nevertheless, the highly fictionalized Inherit the Wind was compulsively watchable for the densely plotted conflicts, thunderous performances, and for its timeless political discourse (as anti-intellectualism is on the rise all over the world).

While Kramer’s ideological stance reduces the small-town folks into despicable ignoramuses, the central lawyer characters and their duel in the courtroom are much more nuanced. Veteran actor Fredric March (Dr. Jekyl and Mr. Hyde, A Star Is Born) plays Matthew Harrison Brady, the staunchly conservative lawyer who although was unsuccessful at the national political arena still enjoys popularity among the rural populace. He receives an adulatory welcome by the Hillsboro folks, who all cheerfully sing ‘Gimme that old-time religion…It’s good enough for me.’

Tap-dancing Gene Kelly was cast against type as E.K. Hornbeck of Baltimore Herald, the cynical big-city reporter. He’s supposed to represent the condescending intellectual elite who believe in nothing. Moreover, the character provides the comic relief by often lampooning the Hillsboro folks and Harrison Brady (“How do you write an obituary about a man who’s been dead for thirty years?”, he says about Brady). It is Baltimore Herald that provides the much-sought out publicity by recruiting Henry Drummond as the defense attorney. Spencer Tracy, renowned for playing Hollywood’s intellectual curmudgeons, realizes Drummond as the champion of liberal ideas.

The most intriguing aspect of Inherit the Wind’s conflict is that Drummond and Brady are old friends. Drummond is said to have worked with Brady when he ran for the presidency, and there’s much more warmth in the friendship shared between Drummond and Brady’s wife, Sarah (Florence Eldridge, March’s wife in real life). In the few instances, Drummond and Brady face each other, outside the sweltering courtroom, we see how disagreements can harmoniously co-exist without always hollering for conformity and capitulation. In this era of rabid partisan animosity, it is fascinating to see these men despite the ideological differences having respect for each other. Furthermore, Kramer brings more emotional ambivalence into the narrative when Brady’s rhetoric are torn down to reveal the man’s underlying vulnerability and fear. 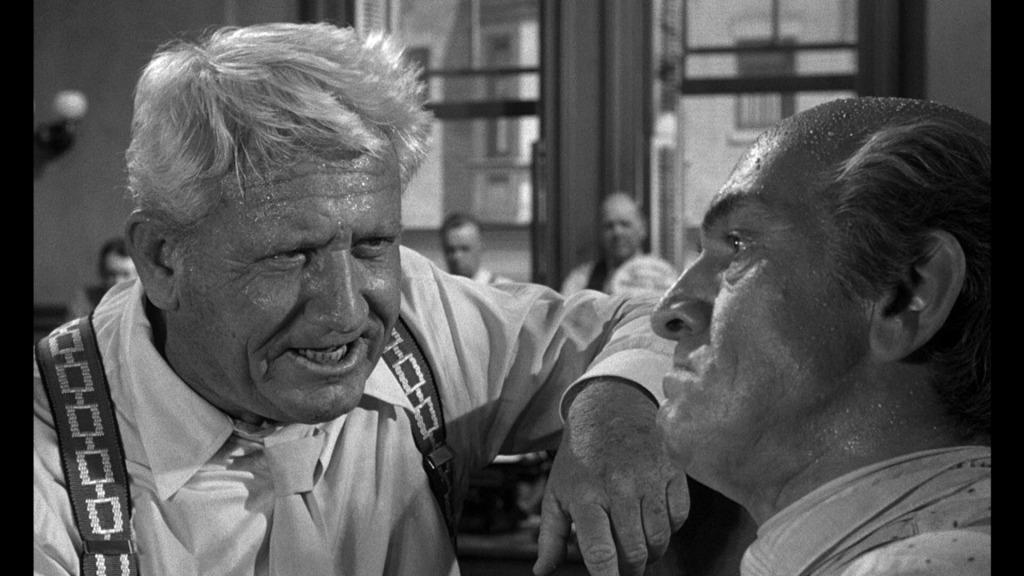 Stanley Kramer’s meticulous, deep focus compositions efficiently dramatize the narrative; each intensely crafted scenario becoming the perfect sounding board to verbalize the progressive social, religious views. The subplot involving the town’s fundamentalist preacher, Jeremiah Brown (Claude Akins) and his daughter, Rachel (Donna Anderson), who’s in love with Bertram Cates, also adds emotional conflict to the narrative which otherwise would have been predominantly interleaved with soliloquies. And in between the ideological battles, Kramer shoe-horns heart-warming exchanges: for instance, Drummond’s dinner-table chat with Sarah, and the old friends’ non-combative talk on the moon-lit porch with their chairs rocking out of sync. The biggest strength of Inherit the Wind, apart from the two explosive central performances, is the enduring appeal of its dialogues (a chunk of it modeled after the transcripts of the real court case). “An idea is a greater monument than a cathedral”, muses Drummond.

Inherit the Wind tells us how unquestioned faith (whether it’s for religion or science) can push us into a regressive state (“Why is it my old friend, that you’ve moved so far away from me?” poignantly asks Brady, to which Brady convincingly replies, “All motion is relative, Matt. Maybe, it’s you who have moved away by standing still.”) It clearly remarks that the struggles existing within and between belief systems may never be resolved, but what’s essential is to accept one another without vehemently imposing one’s belief on another. Eventually, Inherit the Wind (128 minutes) admonishes what would happen when you allow bigoted imbeciles to make laws; such laws whipped up by the populist support will not only disperse their moronic world view, but it’s going to choke everyone’s freedom of thought.  That indeed is a much necessary social message for these trying times.