Great Hollywood film-makers have always managed to expertly slip in subtexts and social critique into their otherwise simple story-line. And, of all the genres, American film-makers belonging to the studio era preferred ‘The Western’ to express their social concerns of the time. Before the onset of counter-culture & women’s liberation movements and the subsequent explosion of American independent film culture, American films of the 1950s brought forth the issues of race and sexual inequality through a sub-textual light. During this decade Western genre – primarily identified as a masculine genre – underwent a change in its ideology. It paved way for fresh, complex representation of women and Native Americans in the Western genre, which we later termed as ‘Revisionist Western’.

The 1950s were also the important decade for this unique genre, because it saw the clash between conservative Western genre directors and new crop of film-makers challenging the genre’s rigid boundaries. On one hand, there were conventional Western masterpieces like Shane (1953), The Searchers (1956), and Rio Bravo (1959). While on the other hand, it was the period of High Noon (1952), Rancho Notorious (1952), Vera Cruz (1954), Forty Guns (1957), etc – westerns with political overtones. And way before the rise of spaghetti westerns, Anthony Mann (Winchester’ 73, The Naked Spur, The Man from Laramie) had played with standard character-types of good guy and bad guy. Amidst these revitalized portrayal of American frontier history, Nicolas Ray’s fascinatingly offbeat mythical Western Johnny Guitar (1954) occupies a very significant place. 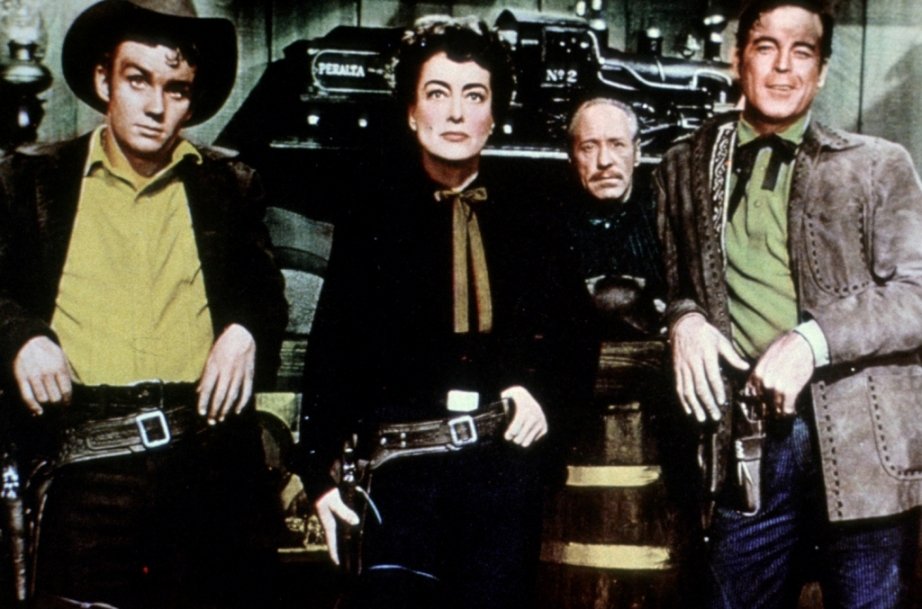 Made a year before Ray’s iconic coming-of-age movie ‘Rebel Without a Cause’, Johnny Guitar possesses few customary details of the genre: railroad construction, a lynching mob, fastest gunslinger, an ornately designed saloon, etc. There’s the deliberate flimsiness and melodrama carefully constructed to play at viewers’ emotions. Yet in this operatic Western, plot remains secondary to the intensely showcased motifs (both thematic & visual). Consequently, those internal layers of psycho-sexual conflicts, complex femininity and critique of McCarthyism overshadow the seemingly simple plot nature. As Mr. Bruce Bennett in the IndieWire article says, “Johnny Guitar views the western through a Jungian kaleidoscope”.

Sterling Hayden plays the titular character, a funny, unapologetic and mysterious man who has a guitar slung around his neck; an image perhaps later familiarized by Sergio Leone’s Harmonica in ‘Once Upon a Time in the West’ (1968). But the twist here is that Johnny Guitar doesn’t carry a gun. Moreover, the guy isn’t even the film’s protagonist. That role goes to Joan Crawford’s Vienna, the fierce proprietor of a saloon/casino which stands tall and lone against howling dust-storm, in the outskirts of a small western town. She has hired her old flame Johnny for protection. But it’s made clear at the start that she can fend off a mad posse, not by using a gun, but rather through the showcase of her sheer force of personality. Basically, it’s Vienna’s world where Johnny is intruding; as opposed to orthodox western narrative where women intrudes men’s world. This initial gender role-reversal sets thing up for the departure from other screen archetypes.

Johnny Guitar was designed as Joan Crawford-vehicle by screenwriter and novelist Roy Chanslor. When Nicolas Ray was selected as director, he hired screenwriter Philip Yordan (the name is said to be front for one of the blacklisted writers affected by McCarthy era) and completely re-wrote the script to perfectly reflect the architectural and geometrical relationship between characters and spaces (Ray says he had enough creative freedom while making this movie with Republic Studios). Nevertheless, Ray was caught between Crawford’s creative altercations with Hayden (the actor later commented “There is not enough money in Hollywood to lure me into making another picture with Joan Crawford … and I like money”) and Mercedes McCambridge. Furthermore, the film received quite a lot of negative reviews after its release to keep Nicolas Ray in unhappy state. But Johnny Guitar, more than six decades later, still happens to be the most unusual and iconoclastic Western movie.

“I intend to be buried here……in the 20th century”, haughtily says the wilful woman of the late 19th century. Vienna’s newly established saloon and lands are all set to make great fortune when the anticipated construction of railroad begins. Contemporary films like ‘Jane Got a Gun’ (2015) and ‘The Homesman’ (2014) have tried to present women protagonist in American frontier space. But Joan Crawford’s Vienna experienced a huge, inviolable success in this matter. Vienna is an unapologetic, gun-toting woman who never suppresses the means she used to stumble upon the fortune (the dialogue of the time indirectly says that Vienna earned it through sex work) or downplays her future ambitions. She is not the cliched symbol of politeness. In fact, her self-reliance and sacrifices made to build this independent space establishes how important the saloon is to her. The intricately constructed cavernous saloon becomes an embodiment of her desires and independence. The two male suitors of Vienna – Johnny Guitar and Dancin’ Kid (Scott Brady) – exist there like some detachable part of the building (they are like an afterthought in the plot). 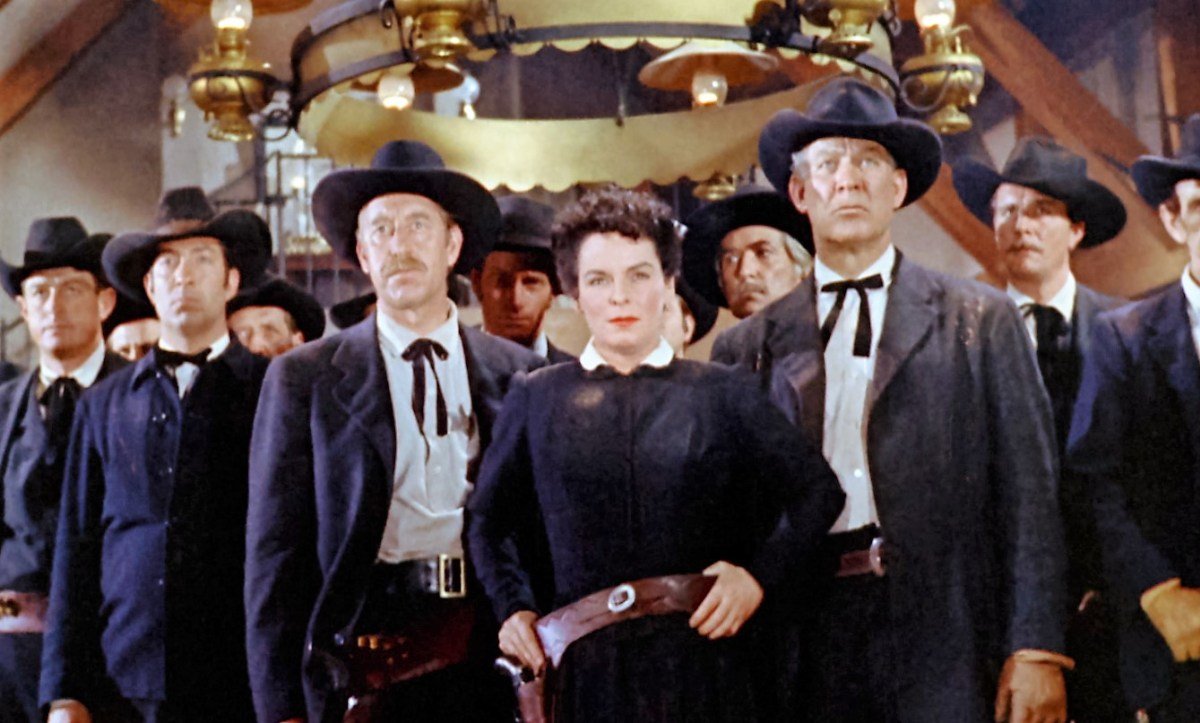 Vienna’s archenemy isn’t the town’s biggest landowner Mr. McIvers (Ward Bond) but the spirited, jealous rancher Emma (Mercedes McCambridge). Emma may have a crush on Vienna’s partner The Dancin’ Kid and she surely dislikes Vienna, taking up every little chance to call her a ‘tramp’. After a mysterious stagecoach robbery, Emma believes it was the work of Dancin’ Kid and his disreputable cohorts. She rallies up the sheriff and other wealthy men of the town to deliver an ultimatum: to close down the business in 24 hours time. As Vienna tries to shield her men from harm, Johnny who has shared a history with Vienna remains amused by the developments. In fact, Johnny is the yet another unapologetic character with a grim sense of humor. Although he arrives to the town as mysterious stranger with a musical instrument, he offers services of protection to atone his past mistakes; not for the sake of protecting an allegedly vulnerable female.

Hayden’s showcase of aloofness through Johnny is one of the film’s interesting aspects. After the bank robbery, he casually asks, “Was I dreaming or did I just see a bank held up?” without ever trying to interrupt. He later allows a young man to be hanged by the posse before saving Vienna. When the Dancin’ Kid asks why he didn’t save the boy, Johnny wryly says, ‘I had to make a choice’. Actually, Johnny Guitar’s nature to not interrupt certain flow of things keeps him alive at the end and gets him the ‘girl’ (or may be here ‘the girl gets him’) as opposed to Dancin’ Kid’s inherent heroic nature to fiercely protect Vienna. The other fascinating role-reversal in the narrative is the way men often shy away from violence (McIvers in the end dismisses the mob after few gun shots) or relegate themselves to the background to set the stage for fight between Emma and Vienna.

The staging and dialogues in Johnny Guitar are the next most memorable element of the film after Joan Crawford. One of my favorite dialogue-dominant scenes is when Crawford and Hayden reassess their relationship and recall the past damages. Crawford with a robust conviction says to Hayden’s Johnny, “A man can lie, steal, and even kill, but as long as he hangs onto his pride, he’s still a man. All a woman has to do is slip once and she’s a tramp”. My other favorite scene is when Turkey is caught by the mob and coerced by Emma to tell ‘Vienna was behind the bank robbery’. The boy Turkey cries, “What do I do? I don’t wanna die!” The depiction of this simple entrapment reflects the politics of McCarthyism prevalent in 50s & 60s Hollywood. The sheer brilliance of the staging in the initial saloon sequence (where Vienna and Emma have their verbal spat) often provokes me to re-watch the film. Ray gets great mileage from creative camera set-up in this opening scene. The saloon is a gaunt structure built within organic outgrowth of surrounding rock formations and it bestows a sense of refinement through the placement of craps table, roulette wheel, liquor, flower-patterned china, glorious chandelier, and a baby grand piano.

The saloon structure, which is a carefully fabricated Western-themed theatrical stage, serves the important purpose of being Vienna’s home as well as to present her attempt of being the so-called ‘cultured’ lady. When Vienna hints how she has invested her dishonor to earn her place or space in the world, the dialogues goes like ‘for every board, plank and beam in the place…’ The splendor adorning the structure not only relates to her ambitions and hopes of becoming a successful capitalist, but also suggests the sort of ‘dressing up’ done to keep away society’s harsh judgmental perception. And, like many other independent spaces of women, the saloon too –the emblem of Vienna’s achievement — is burnt to ashes; not by the men who has invaded her space, but by one hate-filled individual of female gender. The saloon/casino in ‘Johnny Guitar’ I think is one of the best conceived spaces in cinematic history that draws splendid dramatic power and delivers peculiar insights about the protagonist’s psyche. Joan Crawford, alternately embodying the masculine gun-slinging position and caring feminine position (dressed in a gorgeous white gown) makes Vienna her most memorable role after Mildred Pierce (1945).

Johnny Guitar (110 minutes) may elicit different kind of reactions, broadly ranging between ‘campy nonsense’ and ‘revisionist Western genre epic’.  The tailor-made setting, the bright, if not lurid color palettes, and ostentatiously lofty performances may immediately draw some criticisms, but I feel that it’s all part of this great American movie’s appeal. As Mr. Roger Ebert said, “A cheap Western from Republic Pictures, yes. And also one of the boldest and most stylized films of its time, quirky, political, twisted.”

Annabelle: Creation [2017] - A Welcome Entry in The Conjuring Universe