If you aren’t living under a rock or have better streaming subscriptions you would be aware of Netflix’s newest game-changer ‘365 Days (365 dni).’ The polish erotica has been trending on number one in multiple countries including India. For what’s it worth, the softcore distraction does what it promises – being sexy and raunchy. However,  it is also terribly problematic. I mean, I know no one’s interested in the life of a Gangster forcibly making a beautiful Polish girl fall in love with him because we are all in on the sexy-time, but the narrative is so hell-bent on neutralizing and celebrating the abusive relationship that it needs to be called out.

Sold as the hornier polish version of the infamous ’50 Shades Of Grey’ saga, ‘365 Days‘ is a story about an Italian gangster named Massimo who is obsessed with the image of a woman he doesn’t know. So much so that moments after the death of his father, he gets into multiple sexual relationships only to have the portrait of her image hanging all over his mansion. The said woman is Laura. A suave, sales director who is dissatisfied with the relationship she has with her live-in boyfriend. Somehow, the stars align, and on her 29th birthday, she takes a trip to guess where? Sicily, of course!

After a brief blink-and-miss encounter where Massimo is like “Are you lost, Baby Girl?” (He repeats this multiple times), Laura is kidnapped.  The overbearing, alpha-male persona of Massimo forces Laura into a sort of Stockholm Syndrome state and gives her 365 Days to fall in love with him (I mean, would the supposedly planned sequel be called 366 days because it will be filmed in a leap year?). Intial rejection aside and a few shopping-sprees later, Laura gets in on the game of seduction.

Now, there are so many things that are wrong with this entire scenario, but the biggest gasp-worthy narrative twist is that the directors (and supposedly the writer of the book it is based on) believe that every trigger here is okay because it is sexy as hell. For starters, to neutralize Massimo’s male chauvinistic persona, they plot a half-assed scenario where his mafia family refuses to take a deal that involves selling young-girls. To give the two lead characters a spiritual connection they give them both ‘vulnerable hearts’ (I mean, they literally spell it out). There’s also an elaborate juxtaposition sequence to showcase that the two are smart, cunning, and superior human beings who are adult enough to make decisions for themselves.

Massimo is an alpha male who believes in taking everything by force. But he is especially considerate towards Laura because he wants her to fall in love with him. He squeaks and broads multiple times saying that he will only touch her with her permission (while literally shouting this out as he firmly fondles her breasts – visibly hurting her). It is all forgotten because apparently the film needs to be sold as a love story of a dominant. There’s not a single sign of love blooming between the two because the alpha-males’ idea of love is letting his girl watch him getting a blow-job from some woman he has hired.  This is to ensure that she gets a good look at his ‘devilish-tool’ because that is all a woman wants out of an abusive relationship with a daddy-complex.

Also, Read – The Souvenir [2019] Review: An Intricately Observed Documentation of a Toxic Romance

Laura is especially shown as someone who knows exactly what she wants so that you don’t question the intentions of her ability to fall for Massimo. The narrative jumps on the opportunity to dismantle the woman’s image by showing how she is abruptly interested in Massimo because he takes her to shop and buys the entire store out for her. To counter-balance this agenda, they show that she is a rich, privileged woman on her own and the very next thing she does when she gets a breather from the mafia boss is getting her hair colored blonde and go out with her woman-savior-complex friend. 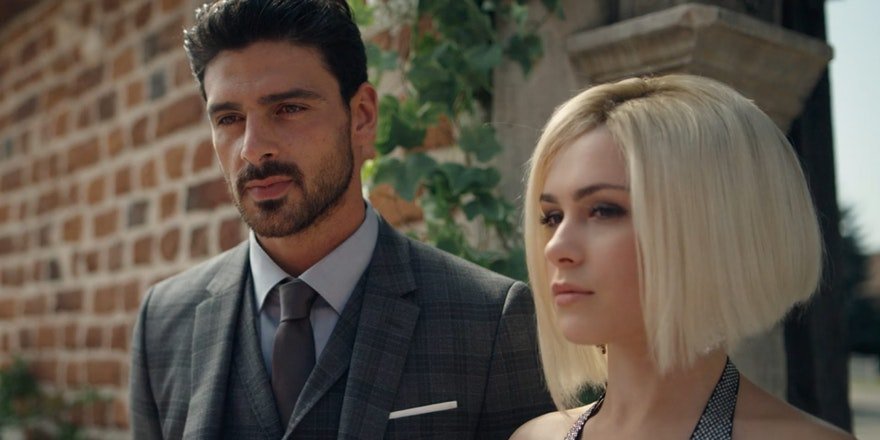 The only purpose the friend serves here is warning and signaling her of her imprisoned personality. Cleverly making all the sex seem legibly okay because it is consensual. Even though it feels forced at least a couple of times. The elaborate sex sequence on the Yacht happens out of guilt that Laura has caused to the mafia family. The directors shamefully blast English love-ballads over each sexualized sequence just so you get used to the idea that all of it is normal in an adult relationship.

The film also glorifies drugging and kidnapping because in 2020 it is all normal if you have chefs who can make the lady a nice dinner or designer who would come to a yacht in the middle of nowhere to specially design a gown for the girl. The foreseen consent also comes from the fact that the Mafia boss threatens to kill Laura’s parents if she tries to run away from the deal of falling in love. The film blatantly normalizes misogyny and celebrates the central character as this savior who rescues the girl out of a visibly normal life. The problem lies in the fact that the makers of ‘365 Days‘ counter every morally incorrect step with a self-aware one. The problem lies in the fact that a “chiseled body with no extra body fat” is sold as a sex fantasy that young girls will eventually look up to in every man. The problem is, the film so blatantly normalizes the mafia world that I wouldn’t be surprised if girls or even men would want to be like Massimo or Laura after watching this colossal derangement.

365 Days is now streaming on Netflix