Chaman Bahaar revolves around the premise ‘tobacco and love are injurious to health.’ Apurva Dhar Badgaiyann the director creates a tale of a city called Lormi in Chhattisgarh. The bear of the jungle scares Billu (Jitendra Kumar) and therefore he quits his job at the forest department. Where his father is working as well. He decides to become the famous paan vendor with his shop ‘Chaman Bahaar’ as against his infamous father. But his shop is on a useless road with hardly any commuters. As Lormi which was earlier part of Bilaspur is now part of Mungeli district. It is a consequence due to a change of map so to say.

Nevertheless, the map of Billu was sure to change with the arrival of a new sub-engineer along with his family just across the road. When Billu is placing the picture of goddess Laxmi, rain gushes forth and so is the entry of Rinku (Ritika Badiani). Rinku is soon to be the love interest of all the boys in Lormi. With Rinku in the city, Billu profits the most.

Somu (Bhuvan Arora) and Chhotu (Direndra Tiwari) who constantly address each other and others as Daddy make their ritual visit to the shop. There are other big daddies that now make a visit to the unsung shop. Shiladitya Tiwari (Alam Khan) a youth politician who dramatically chews paan. Ashu Bhaiya (Ashwani Kumar) the rich owner of a sports shop. And the District Forest Officer’s son.

With these leaders come their followers who play carom at the shop and watch Rinku. The plot then follows with each one making their attempts to meet and greet Rinku. Among them, Billu gets caught and is given due punishment. The movie ends with Billu being sorry for his failure at being the famous paanwala and for losing his love interest Rinku.

After having delivered the strongest performances in ‘Shubh Mangal Zyada Saavdhan’ and ‘Panchayat’ Jitendra Kumar has become a sensation that shouldn’t be missed. Although short-lived, in ‘Chaman Bahaar’ yet again he creates his magic with his stunning performance. As the director is unfaithful to the premise which frizzles out as the movie proceeds. 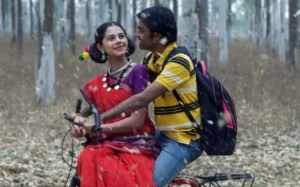 The plot is weak as the ill effects of tobacco consumption are hardly addressed. It remains ambiguous whether the director encourages tobacco consumption or not. On both occasions the cop loses his temper on Billu, not because of tobacco but because he harasses and humiliates Rinku. Billu’s unrequited love for Rinku is evident as he silently but with pain bears all the thrashing. If one is observant one will notice the transition of Billu from a docile paanwala to an enraged lover.

The director captures the male gaze very efficiently in the movie without degrading women. The male gaze is sure to humiliate a person especially a woman or a girl. Highlighting this and not addressing it leads to further tensions. Whether it is the male gaze, excessive tobacco consumption, and harassment. The movie doesn’t solve these issues. At the end of the movie you ask yourself, ‘what just happened?’

Despite the fact that some of the character sketches needed a makeover. The director captures the simplicity of the district; the innocence of Billu and the humility of Billu’s father. The everyday chores are done by Rinku. The tricky and shrewd undertakings of Somu and Chhotu. and the discipline and equanimity of the sub-engineer.

The music director Anshuman Mukherjee seems to recreate the magic created by Ajay-Atul and Tanishk Bagchi in Zero. All the six songs either make you laugh or remind you of a scene in a celebrated and famous movie. The movie is comical, satirical, partially romantic, and tragic. And although it is a treat to see talents like Jitendra Kumar and Alam Khan blooming and flamboyantly performing, Chaman Bahaar falls into the trap of milder form of misogyny.