Assassination (2015) Review: Hollywood, among many other things, is famous for its historical action/adventures, where a group of experts or misfits join together for a patriotic mission. In recent times, except for Tarantino’s “Inglorious Basterds”, Hollywood had mostly stopped doing these kinds of epic historical fictions. Films like “The Great Escape”, “Where Eagles Dare”, “The Dirty Dozen”, etc rightly imbued daring missions within the historical context and with less on-the-nose patriotic lectures. Hollywood continues to make ‘on-the-mission’ films by employing its comic-book heroes, but they are either too acerbic or can’t stop winking at the viewers as if saying ‘See, how cool We Americans are when it comes to saving the world!’

South Korean film industry, in the past decade or so, has made some adventurous historical fictions that rightly possessed the mad-cap energy of the aforementioned films (“The Brotherhood of War”, “The Front Line”, “71: Into the Fire”, etc). Choi Dong-Hoon’s Assassination (2015) is one such impressively bombastic entertainment that takes place during the Japanese occupation of Korea (1910-45).

Providing the feeling of being entertained is the foremost mission of “Assassination” and so it would be better to not see it as a historical movie about the struggles of the Korean Independence Army. If you had been aware of Choi Dong-Hoon’s previous works, you wouldn’t definitely take the historical aspect so seriously (calling it ‘inaccurate’).

Dong-Hoon is a blockbuster director, who repeatedly makes caper films. His movies “The Big Swindle”, “Tajja” and “Thieves” were all filled with over-the-top commercial elements that supply enough excitement. Dong-Hoon, with “Assassination”, has traveled back in history with that same dramatic urgency and is least bothered with contextualizing historical details. The majority of the movie’s action takes place in 1933, where the exiled Korean Provisional Government picks up three efficient people to assassinate a brutal Japanese commander and a wealthy Korean collaborator.

The loose-cannon team comprises of a gifted sniper Ahn Ok-yun (Gianna Jun aka Jun Ji-hyun), a heavy weapons expert Big Gun (Cho In-woon), and a bomb-maker Duk-san (Choi Duk-moon). A trusted operative in the higher order of Provisional Government turns out to be a mole planted by the Japanese, leading to double-crosses & triple crosses. Assassination (2015) could be easily deemed historically inaccurate and has its share of logical flaws, but it works to keep us entertained, thanks to a robust cast, gorgeous cinematography, and twists-throwing script. 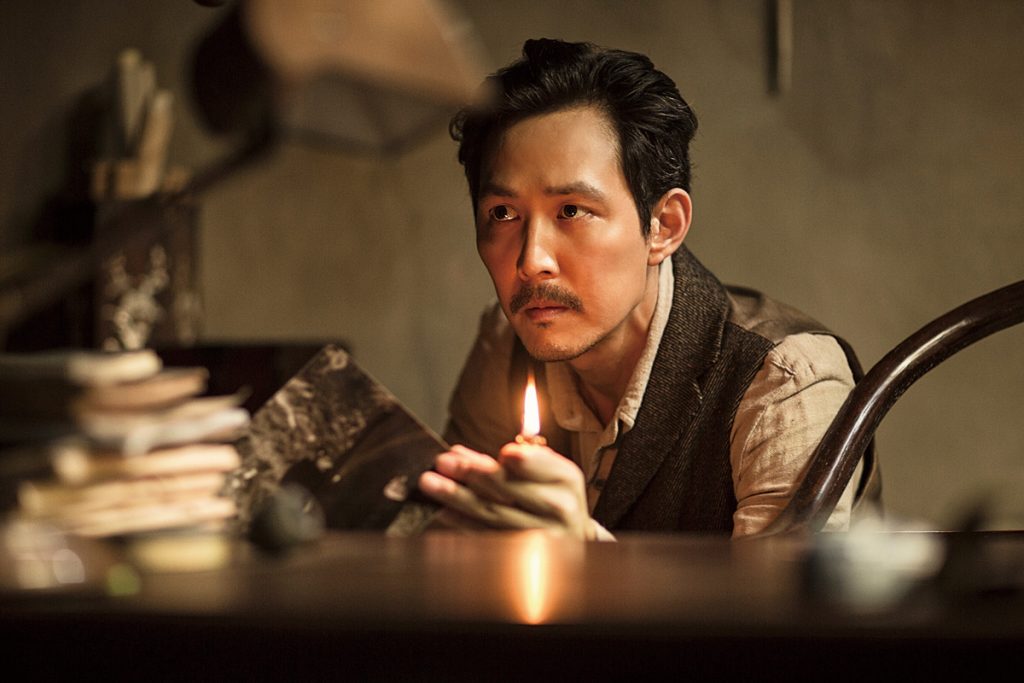 In the movie’s prologue, we see the wealthy Korean businessman ordering a hit on his wife for helping a Korean rebel in a plot to assassinate a Japanese commander. The wife is shot and her twin babies are separated (in the chaos, the wet nurse escapes with one baby, while the other is taken back to the father). The twin-babies element plays a vital role when the story moves to 1933, but it is diffused into the storyline in an organic manner rather than attaching it as a pure gimmick.

The romantic allusions between Ahn and Hawaii pistol do not reach cutesy proportions and threaten to break the narrative flow. Writer/director Choi’s films always fizzle out in the third act, especially by overstaying one’s welcome. The same problem happens with “Assassination”. The 1949 timeline serves no purpose apart from telling us how ruthless as well as cowardly the villain is. The death of certain main characters is also dragged much to provoke viewers’ hate for the villain. There are of course silly montages in the end that don’t give us any emotional satisfaction. As the plot progresses, it becomes more a personal conflict rather than a patriotic mission and so the sudden nationalistic turnover in the climax seems to be a jarring decision.

The glowing cinematography and astounding set designs evoke the particular era, while also lending a fable-like texture. The action scenes are perfectly choreographed and seamlessly integrated into the proceedings. One other positive aspect of Assassination (2015) is the presence of well-written female characters, in what would have been otherwise to battle to prove masculinity. Gianna Jun (“My Sassy Girl”, “Il mare”) is too old to play a character in her early 20’s, but her brilliant performance makes it a minor quibble. And, it is always exciting to see Gianna Jun playing a no-nonsense, short-tempered girl (double-exciting since she is also toting a machine-gun in the movie). Other major Korean stars Ha Jung-woo (“The Yellow Sea”, “The Chaser”) and Jung-jae Lee (“New World”, “The Housemaid”) were convincing in their roles and are never reduced to single-dimensions.

Also Read: 10 Films and TV Shows To Watch If You Liked Squid Game on Netflix

Director Choi tries to evoke Tarantino on many occasions. The characterization of sniper Ahn resembles that of Shoshanna (played by Melanie Laurent) in “Inglorious Basterds” and the wedding ceremony assassination plan seems to be a reversal of “Kill Bill’s” plot. Choi also exhibits a sense of historical detachment, in the similar way Tarantino did with his last two films (Of course, Choi comes nowhere near Tarantino in dialogues or building the tension). The director wants it to be a spectacle that amalgamates different genres and he succeeds to an extent. If only Choi had stopped from veering towards melodrama, the film would have been a more electrifying experience.

South Korean blockbuster feature Assassination (2015) (140 minutes) is a high-octane populist entertainment satiated with a top-notch ensemble and crackerjack gun plays. It perfectly fits into the category of “cinematic junk of the highest order”.