Ever since ‘Parasite’ surfaced as a global phenomenon, people’s appetite for Korean cinema seems insatiable. A number of remarkable projects pre-Parasite have also gained prominence. Combine that with the OTT boom in the ‘covid era’ and you get the reason why we’re bringing you this list. Films from Korea have the unique ability to serve a diverse group of people. Not only as individual entities, but also the number of projects in each distinct category is growing. An inherent complication with this nature of making content is that of the substance withering away. But, as Netflix has been our witness, this does not seem to be the case with Korean movies.

Although the volume of Korean movies isn’t very large on Netflix, there are some quality films you must check out. We’ve tried our best to curate this list so as to come up with new titles that you might not have come across, and which are at the same time great artistic ventures as well. These come highly recommended and we would love to hear from you about your picks in the comments section. Happy reading! 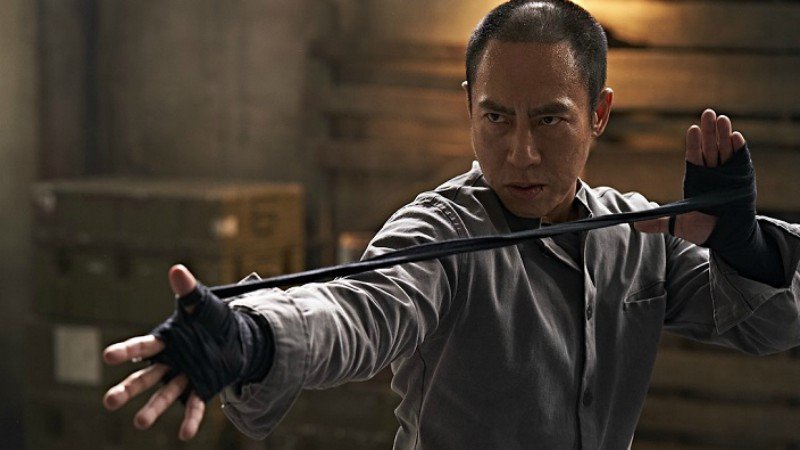 ‘Revenger’ lays out a canvass, picture-perfect, built to entertain and thrill your senses. As much as it brushes your adrenaline and keeps you on the edge, ‘Revenger’ lacks exuberance. The writing mostly falls flat, the characters lack motivation, and the forceful attempts to bring a lighter tone to the scenes seem cringy. But, it has Bruce Khan. And that seems to be enough. The martial arts expert delivers a performance true to his talents and dedication.

All the stunts he pulls are packed with such ferocious energy, it is difficult not to stand up and take note. His central act is one for the ages and should make the list of best action performances in recent film history. If you’re looking for something without looking for something, ‘Revenger’ is a good bet. 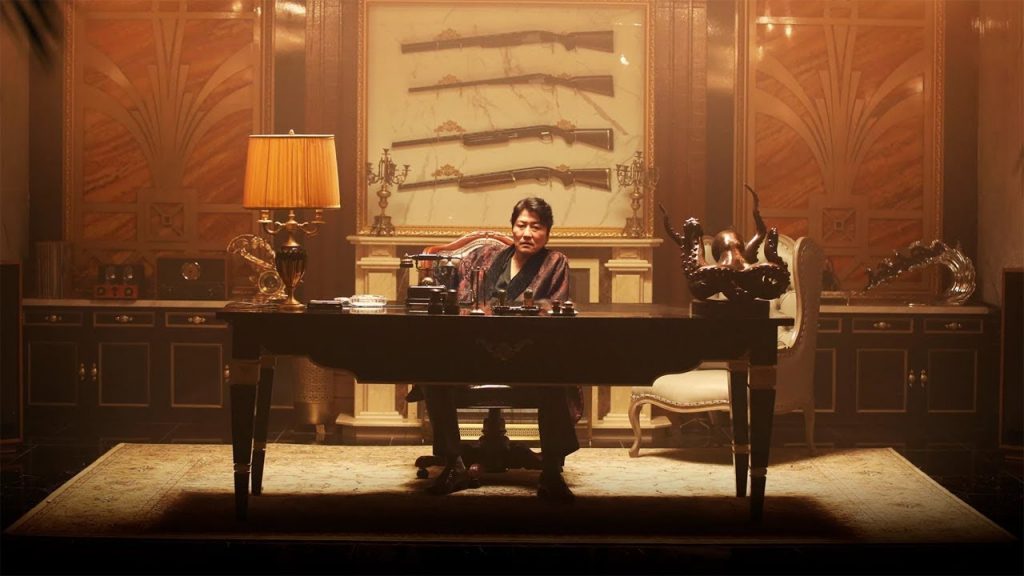 Any film starring Song Kang-ho can not disappoint. His screen presence, personality, and popularity are second to none. He’s a giant of the Korean film industry and has steadily established himself as a global superstar. In ‘The Drug King’, he portrays a real-life drug smuggler Lee Doo-sam, whose criminal empire is built on a pile of bodies and dismantled rivals. He made his notorious name in the ’70s in a Korea marred by political turmoil and only the beginning of the realization of modernism.

‘The Drug King’s inspiration quite clearly stems from yesteryear action classics such as ‘Scarface’ and ‘Chasing the Dragon’. It relies heavily on the mass hysteria and romanticism with gangsters and the depictions of their lives on screen but carves out its own unique fingerprint in Korean cinema.

Watch The Drug King on Netflix 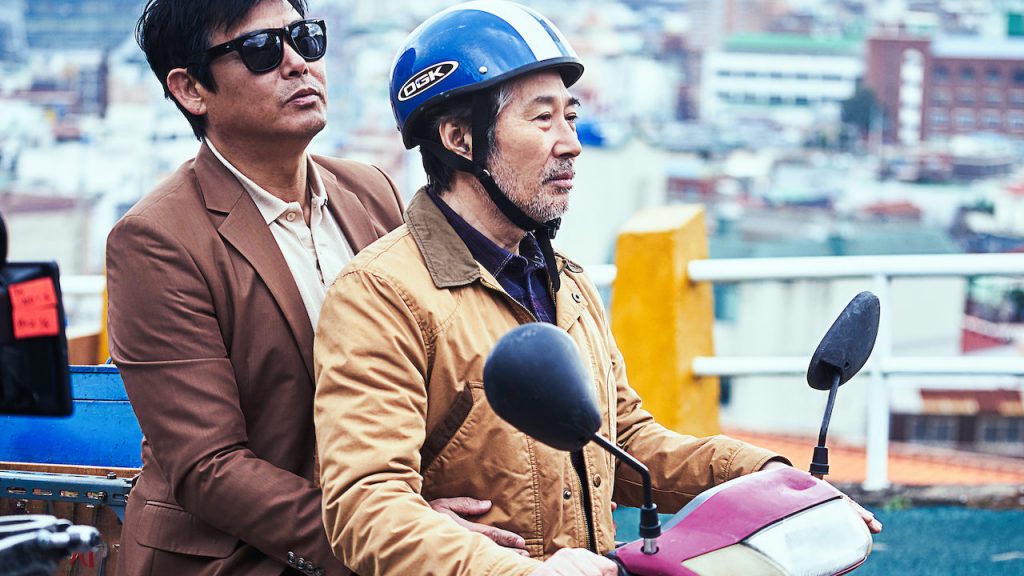 The obsession of film industries with police officers and serial killers has a demonstrated history across all languages. Murders and the mystery of solving it is an age-old trope that is never likely to go out of fashion. ‘The Chase’ sees a landlord who realizes that recent murders in town are related to those committed some three decades back. This discovery sparks fears that the serial killer responsible has returned.  He teams up with a willing police officer and thus begins the search.

Watch The Chase on Netflix 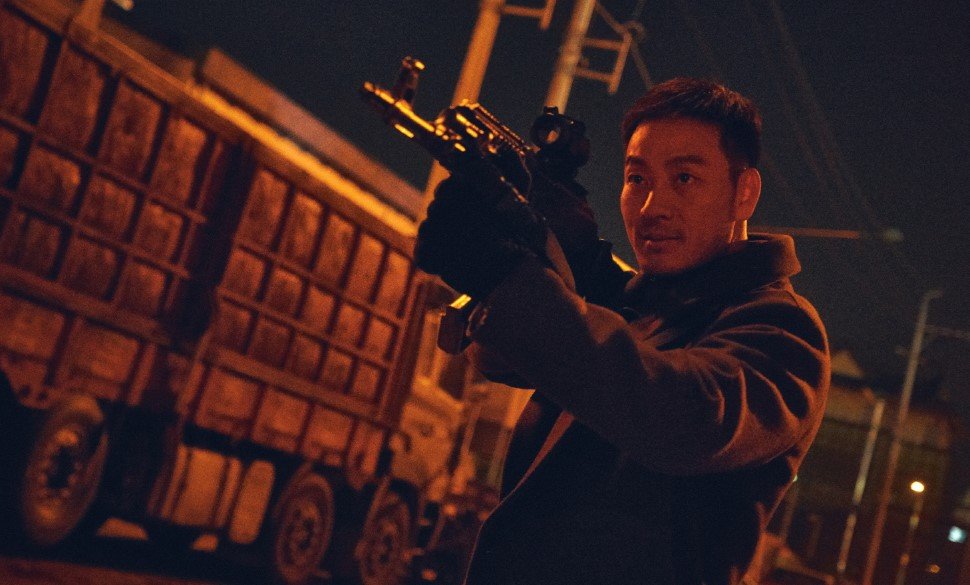 With the way we’re going forward, the possibility of us turning out like ‘Time to Hunt’s grimly realized fantasy is quite high. The makers get almost everything right, from the apathetic people to ravished sub-urbs placing their protagonists with little or no motivations to avoid prison. In a place where human decency holds receding value, the group, released from prison, plans to execute one final heist before disembarking on different paths.

Related to Korean Movies on Netflix –  The Best Films of 2020

Although successful in their attempt, they’re hunted, one by one by a mercenary who won’t stop at anything. The character-driven plot is intense and filled with high-octane action sequences. As far as Korean movies of 2020 are concerned, the Netflix film ‘Time to Hunt’ ticks all boxes of escapist blockbuster cinema, compromising only a bit in character exposition or including and interesting themes that could have been explored with more patience and focus.

Watch Time to Hunt on Netflix 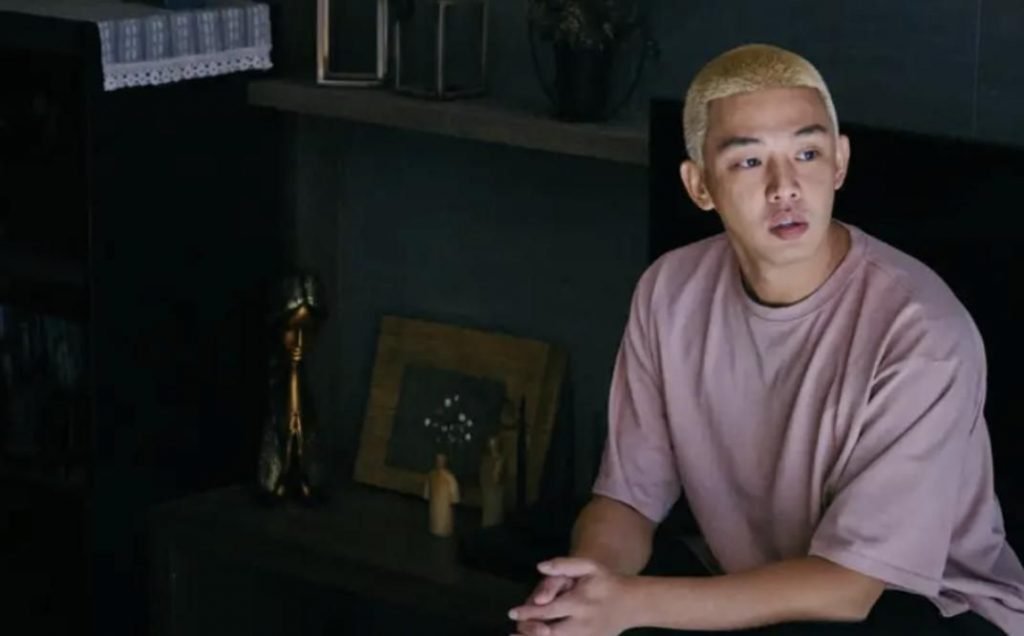 When it comes to the zombie genre, ‘Train to Busan’ really doesn’t have a match. The emotional depth of the script, the relentless zombie attacks, and the thrilling action sequences filmed with realistic time-space initials all add up to a phenomenal experience. ‘#Alive’ takes a different tangent in terms of the setting and the pace, although the overarching theme of a zombie infestation remains the same. John-woo’s neighborhood gets infected with a strange virus that turns humans into flesh-hunting zombies. John gets trapped in his apartment and does his best to communicate with the outside world and arrange a rescue mission. When he hears his family’s final recorded message, John attempts suicide only to see a ray of light in an opposite building.

There are obvious references to the quarantine life induced by the Corona pandemic in John’s solitude. He relishes life in the trappings of his modernist apartment initially. But after a point in time, the lifestyle becomes monotonous and he stumbles upon more “exciting” adventures around him. ‘Alive’ not only deliberates the impact of fear, loneliness, and the millennial condition in contemporary times but also provides solid entertainment and an engaging story. 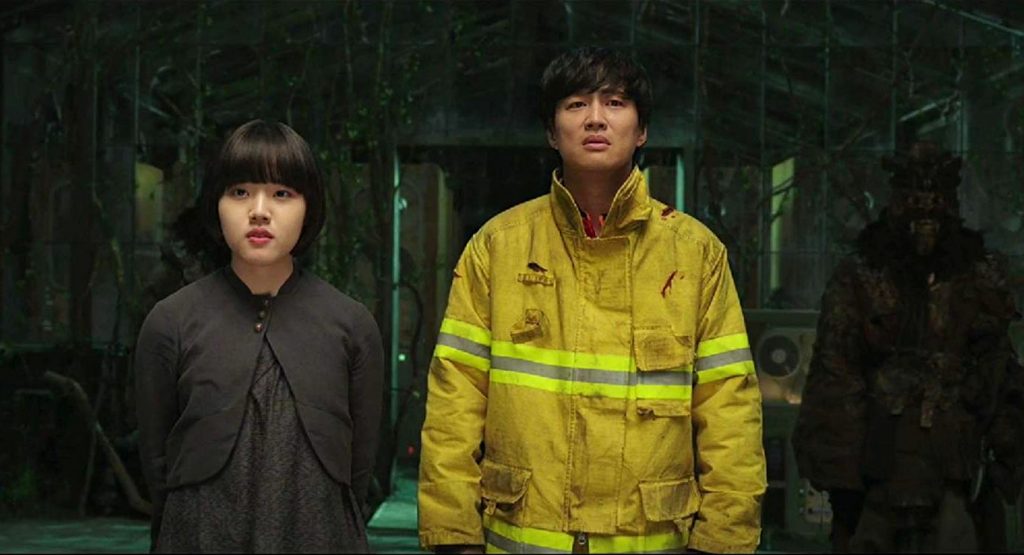 Like exploring the afterlife? Check. Like big-budget productions with lavish sets and grandiose visuals? Check. Like exploring your own soul through that of a fictional character? Check. If you’ve also checked all the three criteria, ‘Along with the Gods 2’ is definitely your cup of tea. Stretched into two parts, the film charts the journey of a fallen fireman through the afterlife where he’s escorted by three of its guardians. They are tasked with defending him in multiple indictments of acts committed by him while on earth. Both the parties gain if his case is pleaded successfully; the guardians score life-saving points (see what I did there?) and the fireman will be resuscitated. His heroic image, though, conceals a rotting secret that he never wants to let out.

The way the fireman’s story unfurls presents an exciting opportunity for director Kim Yong-hwa to build up the film’s emotional appeal. The film’s imagination runs ragged, including in its realm almost everything that could possibly affect someone’s life. Despite its driven attention to the story, ‘Along with the Gods’ leaves the fate of its lead in the viewer’s hands leaving it up to them to pass judgment.

Watch Along with the Gods: The Two Worlds on Netflix 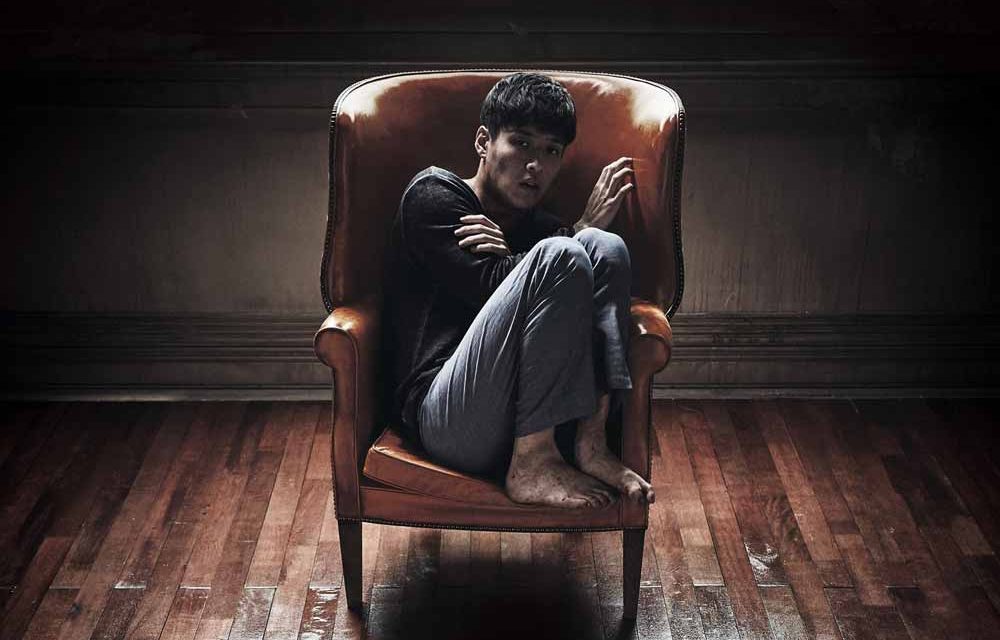 Jang Hang-jun’s ‘Forgotten’ is replete with unexpected plot twists and a compelling story that keeps you hooked. In his trademark lyrical style, Hang-jun tells the story of a 41-year old man living as a teenager with his pretend family. As he grows suspicious of his situation, he further probes and realizes a horrible truth about his past life. There’s never a still moment in the film. Hang-jun keeps the viewer on edge with constant new information and multiple plot-endings.

‘Forgotten’ boasts of an innovative plot and near-perfect execution both in terms of style and substance. The clever direction takes you to different places in your mind as you watch on, thus keeping the mystery at its core intact until the very end. ‘Forgotten’ adds another dimension to innovation in storytelling, something that Korean films redefine with every new venture. 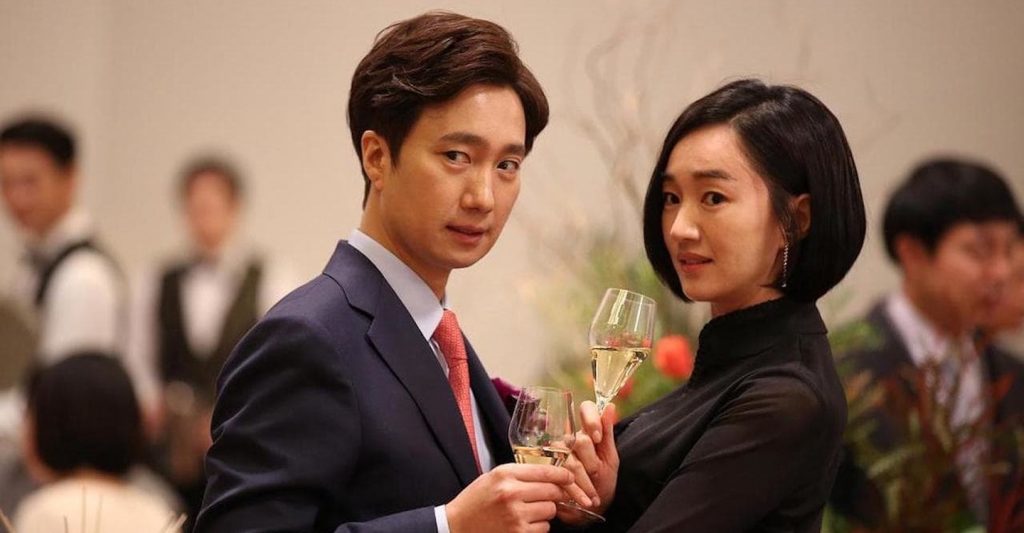 ‘High Society’ ponders upon the price one pays to sell one’s soul to gain in life. The philosophy behind the premise of the film is mirrored in real-life in the upper echelon of our society. Dark, rotting truths behind great success stories and the elusive ‘dream life’ we all aspire for are not pleasant. They’re kept buried and the powerful exhort every resource dispensable to make sure they never come out. After saving a man from a burning building, venerable Professor Jang dreams of a life as a politician. His wife Soo-yeon, deputy director of the gallery of contemporary art, pushes to further her own career by indulging in an affair. The two loose sight of themselves as they’re sucked in by the grandiosity of the world in front of them.

There is a lot of erotic content in the film. Director Hyuk Byun, who also wrote the film, never quite manages to rise beyond the typecasted genre tropes that have been explored before. There’s little innovation in terms of character detailing and storytelling, which leaves the two leads with a lot of responsibility. Soo Ae and Park Hae-il are up to the task and evolve their chemistry and dynamic with admirable subtlety and nuance for the third act. Byun, though, sticks to the philosophical complication he presents until the very end. ‘High Society’ probes the moral compass within you and draws it against the most irresistible thing in the world – desire – and provides ample food for thought but suffers from mediocre execution. 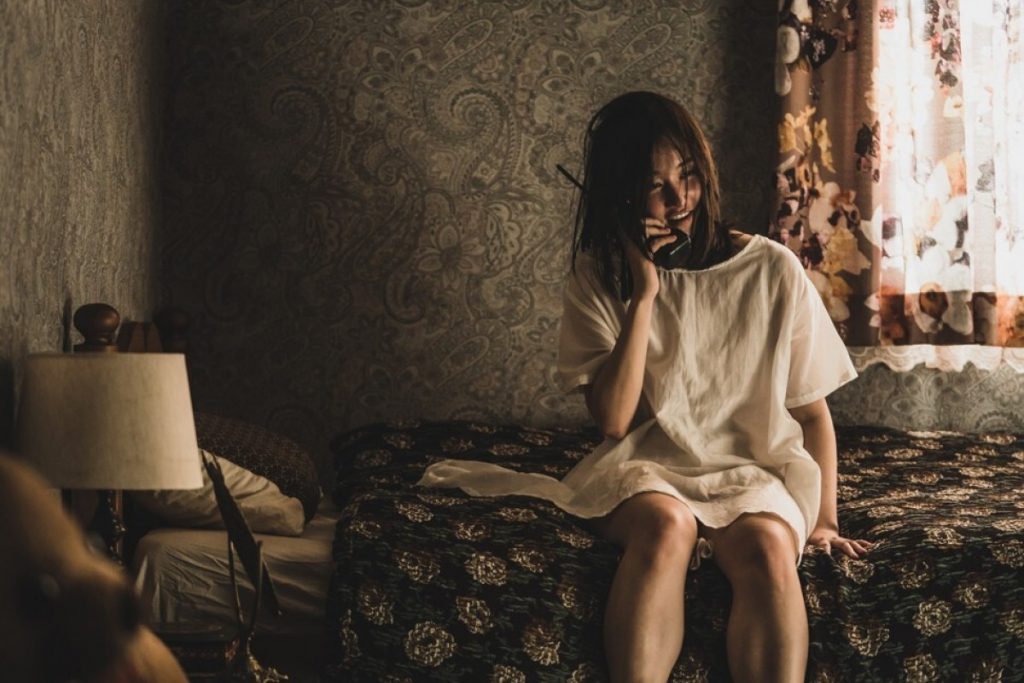 Kim comes back to stay at her childhood house while visiting her sick mother. After discovering she has lost her phone, Kim ventures around the house and stumbles upon a landline. She receives regular calls from a strange woman, Young-sook, who’s supposedly living in the same house a couple of decades ago. At first sceptical, Kim starts to believe the woman after she saves Kim’s father from a childhood accident. She lives in the altered timeline but is unaware of a jealous Young-sook plotting against her. They wage a war that travels across timelines and with them changes the landscape of their existence.

Related to Korean Movies on Netflix – The Call [2020] Netflix Review: When Present and Past Collide in a Hopeless World

While ‘Call’ is definitely engaging as a sci-fi thriller, it comes with a few fundamental flaws. The plausibility of the premise is one issue. There’s no explanation whatsoever as to how the two protagonists were able to communicate and how the past can alter the present. Due to the limited nature of the idea, the ending, at least before the credits rolled in, was predictable. However, ‘Call’ leaves nothing to chance and whims of the viewer and delivers an enjoyable cinematic experience owing to superlative performances and a fast-paced narrative.

Watch The Call on Netflix 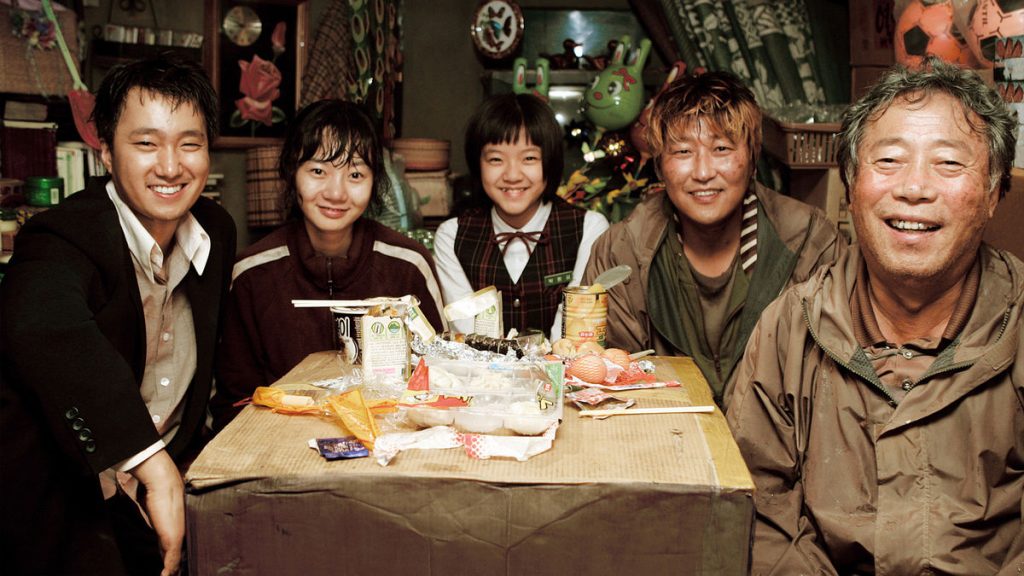 ‘The Host’, at least for the initial few minutes, plays out like a dysfunctional symphony that seems restless and attuned to follow the beat. Once it gets its claws hooked in, there’s no turning back. Bong Joon-ho collaborates with regular Song Kang-ho on the film.

The plot revolves around a mysterious amphibian creature who emerges from the river and disappears from the scene with the daughter of Park Gang-du, the central point in the film. He, along with his family, embark on a rescue mission amidst growing incidents of the monster’s sighting. ‘The Host’ ebbs and flows in the lavish and grand vision of director Bong. The filmmaker articulates a battle against the odds brimming with high-intensity drama and tastefully curated set pieces. The urgency in the film’s events and the purity of motivations of the characters go hand in hand to amplify the film’s cinematic impact.

Much like Steven Spielberg, director Bong creates magical moments, the ones that run through your body like electricity in a live wire. The film is a memorable experience and stays on Netflix as a film produced almost a decade and a half ago for good reason.

Watch The Host on Netflix