The rom-com genre sees the biggest volumes on OTT platforms. Netflix, as a streaming service, is expected to present exciting and sufficiently differentiated projects from the genre. While most do not stand out in this metric, some become memorable films. With Valentine’s Day just around the corner, ‘Love and Leashes’ might just be the perfect film to watch with your partner.

The premise is interesting for a South Korean movie. It involves the strange relationship between Ji-woo (Seohyun) and Ji-hoo (Lee Jun-young), colleagues working for a toy company. The former incidentally picks up a package for the latter that packs a collar and leash. This kick-starts an awkward process of the two bonding over this fetish, eventually leading Ji-woo to become the ‘D’ in the ‘DS’ relationship. Its nature becomes a complicated problem for both individuals, who try their best to navigate these personal challenges. There is an interesting coming-of-age aspect to the couple’s romance, which isn’t a conventional one. How many non-platonic BDSM films about finding oneself through another can you really think of? Probably none.

Related to Love and Leashes – Into The Wind (2022) Netflix Review: Felt Like A Music Video Edit Hobbling Its Way Through Cliches

‘Love and Leashes’ never goes overboard with the kinky part of the storytelling. It intelligently follows the two characters and allows them to warm up to you and each other. The process is wonderfully handled by director Hyeon-jin Park who leaves plenty of laughs along the way. He rarely seems in a rush to push either the viewer of his characters towards his two cents on love. The tendency for the sexual stuff to take over the more delicate and complex emotional fabric of the story is difficult to resist. Many of ‘Love & Leashes’ predecessors have gone this way, but not with the kind of depth that it achieves. Both lead actors are surprisingly singers by profession, which isn’t obvious when you see them on screen. 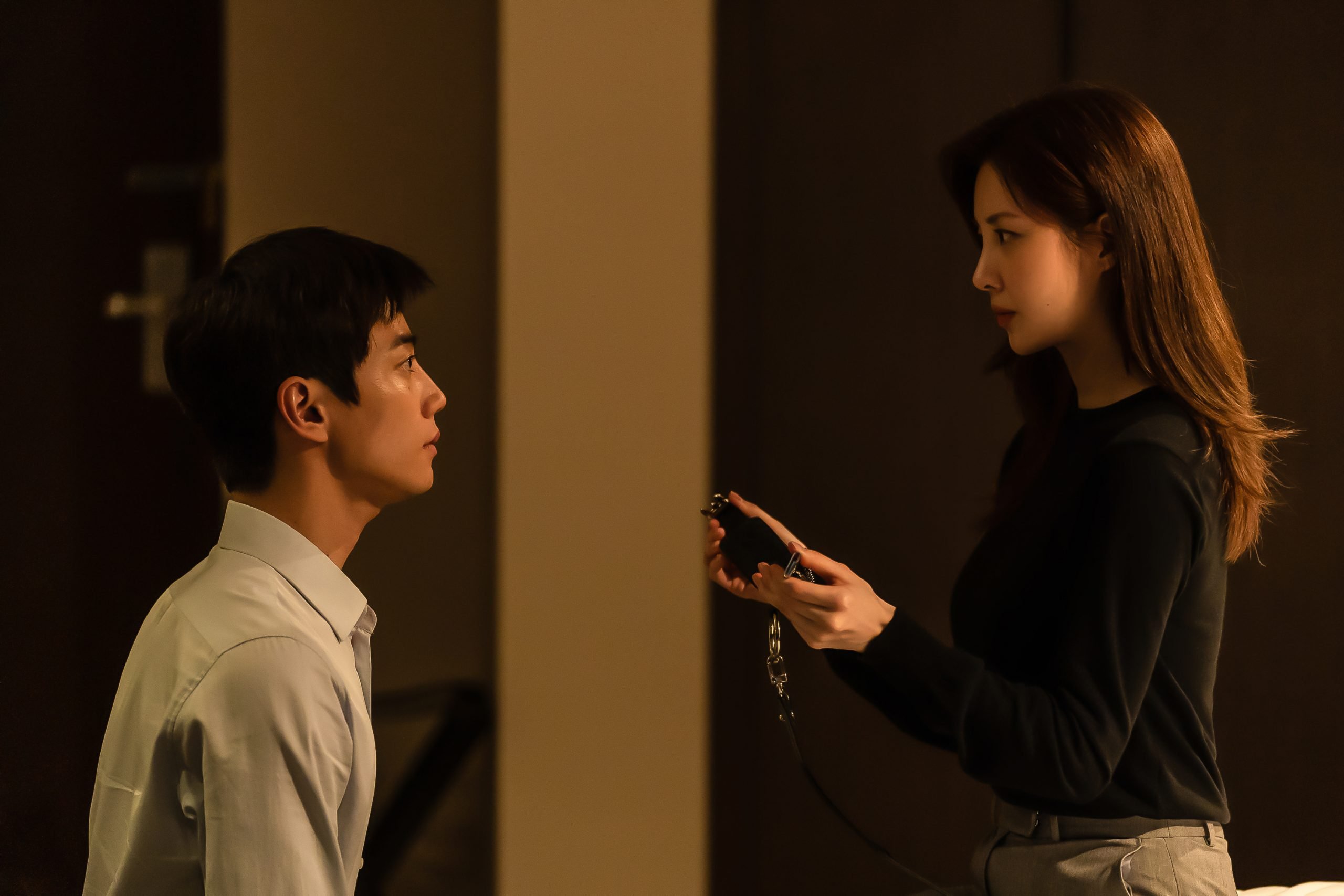 The pair conjures up great chemistry and provides a rare innocence to the BDSM scenes. Their execution is differentiated from the hardcore imagining generalized so often. The role-play is sweet more than scintillating. The two characters actually discover a lot about themselves in the journey. Parts about their personalities that they did not know existed, things that they didn’t know they were capable of. Given the perversion of the subject, ‘Love & Leashes’ does an admirable job of staying away from the dark, sensual appeal of domination-submission. Its central theme is about the difficulty of finding a partner who can accept you for your true self. Even when you do, changing for that person might seem to be a big risk.

This struggle is apparent for Ji-woo and Ji-hoo. They both arrive at crossroads when they want different things from each other. But their conclusions are not necessarily based on how they feel about each other but more about themselves. The hesitance is a caveat to a big leap of faith human nature seldom allows. Flipping your life upside down for that person is an act of courage. The adventurous spirit of the two characters is endearing to watch as a viewer. ‘Love & Leashes’ finds it rather easy to ride this wave with minimal leakages.

The same cannot be said about the ending, though. For a moment, it seems like a perfect third-act setup. But in the final lap, there is some compromise. The ending does not spoil the movie but restricts it from being elevated to a better film. It is a rare rom-com that can be watched again for its appeal and nuanced representation. The biggest takeaway is the absence of cliches both in inspiration and execution. The presence of those fetishes might make the experience a bit uncomfortable for some. It certainly did for me. But it was the connection with the characters’ journey that the film so beautifully manages to create that made this passable. ‘Love & Leashes’ is a bold movie that makes no secret of its USP. In fact, it recognizes its cinematic moat through its main driver of inspiration and heady final product. It emerges as a perfect watch for the upcoming special day with your partner. Not because of the kinky stuff, but for the fungibility of love that makes it such an easily traded commodity.

Love and Leashes is now streaming on Netflix

Gehraiyaan (2022) Review: About The Complex Impulses and Motivations of a Ethically Conflicted Youth