In Cow (2022), which premiered at the Cannes Film Festival last year and is streaming on MUBI, British Auteur Andrea Arnold follows a female cow making herself useful in a dairy farm. She produces milk and offers herself to her male counterparts, to complete her duties of child-bearing. She is called Luma. In Arnold’s feature films, from Fish Tank to American Honey, her female protagonists find themselves caught up between liberation and escape. Here, Luma is caught up too. Physically, yes- but as this raw and immersive documentary follows her with gritty close-ups, perhaps even emotionally.

We first meet Luma when she is giving birth: her vaginal canal making way for her newborn calf. She licks her baby clean, and mere minutes later mother and child are separated since responsibilities come first. Luma’s desperate moos follow, so tender and unflinching in its limited capacity it is as unshakeable a sound as anything I’ve encountered so vividly on screen. A heartbreaking moment occurs shortly after- she refuses to eat after being separated and gradually falls over a cow near.

Arnold, teaming with cinematographer Magda Kowalczyk, finds Luma’s view of the world with steady close-ups and unobtrusive handheld camerawork. We patiently watch her, slowly traversing from admiration to apathy, being milked over and over again, standing on an unsteady piece of wood, by mechanical nozzles. Her milk is strictly for industrial purposes- and so is her body. She endures the monotonous routine of child-bearing for the umpteenth time, as disinterested as ever. I could not help but think of The Handmaid’s Tale.

Inevitably, Cow cannot escape the comparisons that arrive from Viktor Kossakovsky’s Gunda, an equally brilliant if a more visually stylish rendition of the daily life of a piglet. Arnold’s vision is tonally contrasting- its harsh, uncompromising, and immersive vision of the bond between humans and animals churns out empathy and compassion in steady rushes. 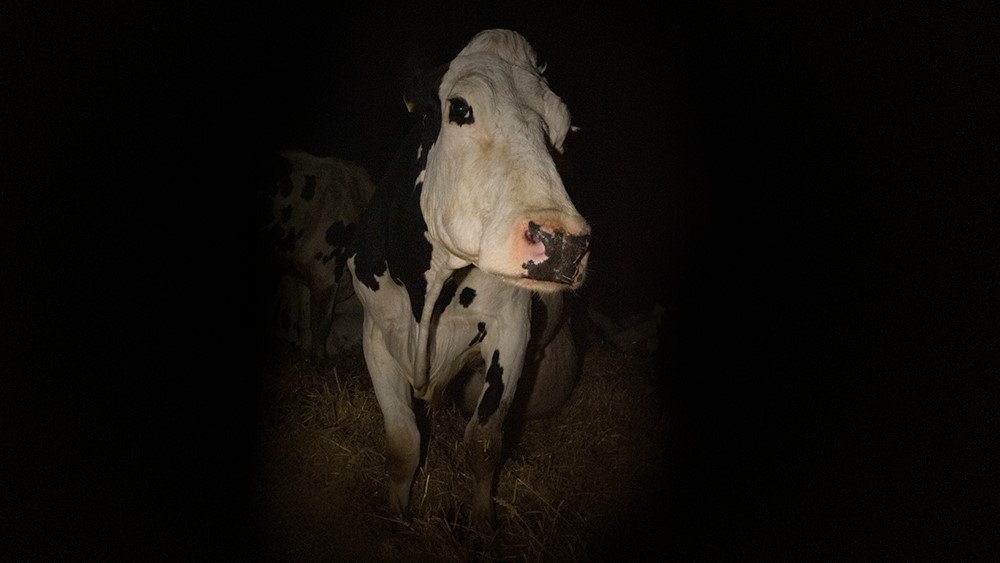 Cow is near-wordless and presents the participation of people as tertiary until the very last moments. It recognizes people as who they are, workers doing their duty, following orders under a greater platform. When Luma looks directly into the camera, into your eyes- it feels like the only creature in the world that matters. There’s a wonderful moment halfway through, when Luma finally finds life outside the cages and locks- she runs and stops at a bare field. She chews in abandon. At dusk, her face turns upwards towards the sky. These fleeting moments of abandon are her most peaceful.

There are no grand gestures of political commentary, yet Cow finds Arnold at her most acute sense of political overtones. Luma’s identity as a female cow confines her, as she is continuously exploited sexually- the scene involving her mating with a bull does not involve much of thought either. The workers at the farm offer her check-up at regular intervals, making sure her vaginal cord is clean. Soon enough, she’s pregnant again. This time around, one gets to see the entire process from Luma’s point of view. Her exhaustion is palpable – she is wholly sure how her baby is only with her for now and not forever. She uses this limited time to the mos t- and licks her clean immediately.

Cow does not cast a judgemental eye at the happenings inside the farm- it just sees it as it is, and invites its audience for a fair bit of choice. The people as well as the animals- they simply exist on the basis of resources. It presents the people working in the farm as quite sympathetic and patient, able to take good care of the bovines. They are duty-bound too, at the end of the day.

Why would one watch a 98 minute documentary on a cow getting milked and giving birth? What does it have to say? Do cows feel? There are so many questions one might come across while sitting eye-to-eye with Luma, seeing the world in all its apparent cruelty and destiny. Cow silently answers them all. In the final act, it packs in an inevitable gut-punch that speaks truth to the relationship humans have with the world and its inhabitants. Arnold’s Cow is as brilliant as it is vital and contains the indelible power to change the way you look at the world.