Home»Reviews»Uttara (2000): Capturing the Zeitgeist of a Contemporary Turbulent Period and Decoupage
Reviews

Uttara (2000): Capturing the Zeitgeist of a Contemporary Turbulent Period and Decoupage: For Buddhadev Dasgupta, the subliminal work of art lies in the images conveyed between two lines of poetry. The film opens with a nearly static view of a magnificent forest seen from within. A view of the trees almost seeming to cover the vast, grand landscape gives a tactile feeling with their sensuous forms, alive, concrete, and full of saps. A few dry leaves are falling, giving the image a notion of movement juxtaposed with its tranquil, serene score and birds chirping. A peaceful world is threatened. But the utopic opening shot is a motif in two other important junctures in the movie. A series of disjunctive shots weaving the threads of the story disrupts any idea of linearity introducing us to the various forces that seem to go against one another both figuratively on the screen and on a mental level. The director uses an almost personal interwoven tale adapted from a short story by Samaresh Basu to create tiny fragments of action that hold together when connected, and the viewers contain the duration and location of the story entirely in their minds. These tiny fragments of action can be cut out from the totality in their own rights, called “decoupage” in French. It is a crucial element of creating a story of elevated realism that gives the tale a distinguishable form.

The story takes place in a remote village called Deulpur, where Balaram and Nimai are the railway station staff. One is a signalman, and the other a gateman. They do not have much work to do except signaling and flagging off just a couple of trains every day. They share a close bond that gets translated into their daily lives, primarily through their shared interest in wrestling. They wrestle in their leisure time, and their illusion of bonding gets embodied in the wrestling ring. The shared interest in an overpowering act seems ironic, and they turn out delusional with the arrival of Uttara. Contradiction also comes to the forefront in the religious tussle between Christianity and Hinduism. Padri baba, a respected figure in the village, is the father of the village church and looks after the well-being of an orphan boy whom he calls Mathew (his real name was Rakhal) but gets questioned for baptizing him. He provides food in the poverty-stricken village in exchange for converting desperate souls. The peaceful ambiance of the village is disrupted by the arrival of the three goons who aggressively roam around the village, stalking and posing a sense of threat to Padri baba’s workings. As the two men squabble over Uttara turning her into an almost physical entity without any humane side to it, a chain of events leads to the burning down of the church by the Hindu zealots in the village and the padre gets killed as he is tied to a pole and petrol is poured on him. Uttara witnesses the crime, and as she becomes desperate for help, the world around her seems like a purge. 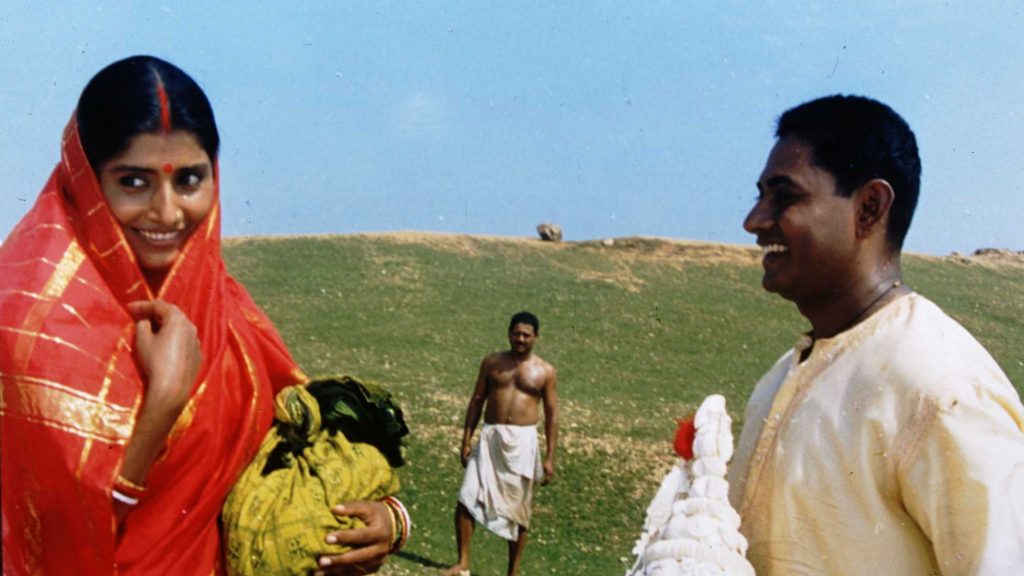 In India, several facets of our lives, like science, religion, mythology, art, philosophy, and politics, seep into our daily lives, trying to overpower each other. We cannot separate these threads to examine their influence on our way of life. Brief moments of respite happen with the surreal imageries of the dancing troupes against large expanses. It provides a moment of pure gratification biting into our subconscious against a violent backdrop. The dwarves looking for a different world resembling the idea of hope invites the dynamic qualities of the fantastical and magical into the biting reality. As the group of dwarves is looking for an alternative and the dancing troupe performing their Natua dance seems to pass off at the end with clever use of deep focus, it shows attributes of a painting. Once the poetry is being written, the images before and after the painting start disclosing themselves in front of our eyes.

The ramifications that slowly start cropping up are almost like a chain reaction reflecting the shaking up of various social fabrics into which we thrive. A moment of true bliss and peaceful harmony takes place when the dwarf station guard talks about how their tribe has gone frustrated with the unnecessary conflicts of tall men and offers a better future to Uttara. But this moment is interrupted by the roaring sound of the jeep of the goons, which has been established as a motif. It is reduced to meaningless and futile violence as the hopeful dwarf is killed with a throwing knife, and Uttara is suggested to be raped. Through the movements and narrative, the film comments on men’s social injustice and morally weak nature in contrast to their strong physical and social status. It weaves together all the particles to present a picture that will be best remembered through its moments of optimism and Mathew.

Mathew embodies innocence, trying to learn from the world, taking the best of it, and finally getting shielded by the dancing troupe from the malice that the circumstances present themselves with. The triumph of the lyrical quality in the film lies in the casting of a spell protecting its inhabitants. The opening utopic idyllic image returns at the end, hinting at nature fighting for its people and protecting them from the gore with its wings and eloquence.

Love in the Villa [2022] Netflix Review: A Generic & Forgettable Rom-com That Romances a Heap of Cliches