A healthy form of scepticism for any unconventional premise is a warranted one. Hoichoi’s new 6 episode show, Byadh (Season 1), directed by Abhirup Ghosh, is one such unconventional show in terms of its premise. The Department of Unusual Cases, a branch of the Kolkata Police that also moonlights as a form of punishment posting for officers who are “rebels without causes “, gets an unusual case – sparrows are found murdered near fields, and the department is asked to investigate.

The show takes a couple of intelligent decisions. Firstly, it reveals the killer right off the bat to the audience, if not his identity. Taking the whodunit aspect of the story completely out of the picture, the show becomes free to focus on the how and the why of the story arguably far more interesting questions. Secondly, the treatment the show takes with regards to the story is deadly serious. The ethos of the investigative officers, as well as the show itself, is simple – “Murder is Murder, be it for human beings or animals”. Thus the show, from a technical and a screenplay standpoint, subliminally manages to assuage the viewers’ niggling question – how much seriously should the killing of sparrows be accounted for?” The answer, initially, was quite serious. Later, as the show delves deeper into the reasoning behind the murders, the seriousness deepens as the stakes slowly become higher.

What surprised me about Byadh is the director’s treatment of the show as an investigative mood piece. The cinematography is astounding, mostly focusing on greyish colour pallets resulting from shooting during the rainy season. The show also manages to explore the rural side of Bengal beautifully, giving it an appropriate measure of menace and sombre tonality. Director Abhirup Ghosh’s decision to cast Anirban Chakrabarti as the erstwhile serial killer is very much against the grain of expectations of the audience. Chakrabarti had so far been very popular as the titular Eken Babu in the Eken Babu series, and all his subsequent roles, barring one or two, had been a variation of the Eken Babu shtick. So he giving such a restrained and nuanced performance is a testament to his acting prowess; that automatically elevates the show up a notch. 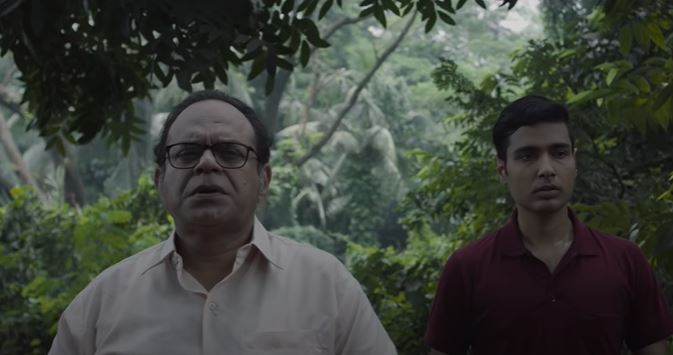 The show also portrays the Kolkata Police headquarters as a lived-in place, a typical governmental office. The Department of Unusual Cases visually fits the bill in the show. A makeshift office in the attic of the headquarters of the police department, dusty files stacked one upon the other on old shelves, a single table having an old rotary telephone as its only mode of contact – visibly, the department gives off the vibe of an outcast. It is a precise thematic representation of how the characters in this show visualize themselves.

The Head of the Department of Unusual Cases, Inspector Kanai Das, a former “rebel without a cause” whose punishment posting has made him lackadaisical. Shouvik, a newcomer, is the typical new guy on the block who is eager to solve cases and get involved in the accompanying weirdness. As the story progresses, Rajatava Dutta, the veteran police officer and kind but sarcastic boss, becomes a foil to Shouvik (Souman Bose), who displays a certain layer of youthful arrogance and confidence, as the two characters grow closer. Even when the dialogues become a tad bit too simplistic at times, their chemistry shines through, thus making you follow the story through its interesting and thought-provoking conclusion.

You would expect a show about the murdering of sparrows to have a commentary on animal cruelty. The story takes ample opportunities to delve into the aspects of animal cruelty, recontextualizing the existence of animals and highlighting the selfishness of humans. But what Ghosh does, which is remarkable, is show how political his point of view is at the end. The reason behind the murders – as explained by the killer in the climax – is decidedly a preamble to a revolution. There would have been a possibility that the story would end this way because the historical context from which this story takes its inspiration does leave some details out when the killer is explaining the motivations. But history is always the judge, and when the full picture is revealed, a picture of misguided faithfulness to ideology comes into sharp focus.

The main gripes I have with the show are technical aspects. The supporting cast isn’t as strong as the lead performers, thus making some scenes feel stilted in comparison. Secondly, the voiceover dubbing during post-production comes off as distracting because there are moments where the dialogues feel noticeably out of sync with the characters’ speech. However, the criticisms do not take away from the show’s resounding quality. Abhirup Ghosh proves that budget constraints aren’t a form of a hindrance if your story is sound and your treatment of the story follows a clear vision. Easily one of Hoichoi’s best works, notwithstanding the Bangladesh imports, Byadh is a show that deserves to be seen. With 6 episodes, each running 20 mins, it is an easy binge over the weekend.

IF Byadh (2022) ISN’T AVAILABLE FOR STREAMING IN YOUR AREA, WATCH IT BY USING EXPRESSVPN. IT’S FAST, SECURE, AND UNBLOCKS PRIME VIDEO, NETFLIX, HBO MAX, AND PRETTY MUCH ANY OTHER STREAMING PLATFORM. HERE ARE SOME EXCITING DEALS FOR YOU.