Stand-up comedian, actor & filmmaker Mike Birbiglia made a pointed observation that “Art is socialism but life is capitalism”.  This observation serves as the core idea for his super-smart second feature Don’t Think Twice (2016). Mike made his directorial debut with the endearing indie comedy “Sleepwalk with Me” (2012). It was a part autobiographical story based on the solo show (of the same name) he created for weekly podcast “This American Life”. Mike’s debut feature pondered over the escalating messiness in the life of an up-and-coming stand-up comedian. With Don’t Think Twice, Mike once again delves into a subject that’s closer to his heart. He perfectly distils all those years of doing live comedy to take a bittersweet look at the lives of six talented comedians, belonging to a New York improv group. By taking over an earnest, intimate look at the predicament of these comics, the director touches upon some broader contexts or themes: a passion for art-form vs individual talent; and the false sense of success. This film is worth watching even if you have never cared about improvisational sketch comedy because the question of success and failure, plaguing the lives of this six people, could be related by all the anxiety-ridden young urbanites.

The film opens with a prologue of sorts, covering the history of improv comedy (started in 1950s by Chicago-based comedians) and establishes the rules: building on the performance of your partner; to not do show-boating and perform as a group; to react immediately without doing much thinking (this rule gives us the title). When we take a first look at the tight-knit members of an improv group called “The Commune”, we get the sense of watching a family. In the warming-up performance behind-the-stage, their comic thoughts beautifully blend in. Their offstage interactions are followed by astounding on-stage improvisations which earn our pinching laughs. Mark Twain said, “Humor is tragedy plus time”. Mike’s script wholly concentrates on the ‘time’ – the thing which contorts their affiliation. And, Mike Birbiglia never fails to see the humor lying beneath the sadness and frustration, staying true to Mr. Twain’s words.

Miles, played by Mike himself, is the leader of The Commune. He is perhaps the unlikable character among the bunch. Miles, an improv teacher in the late 30s, is still trying hard to qualify as a performer for “Weekend Live” (a stand-in for SNL). He doesn’t realize that he is too old to sleep with 20-year-old students in his college-dorm-like room. Allison (Kate Micucci) is an illustrator, who is working on a graphic novel for years; Philosophizing, thirty-something Bill (Chris Gerhard) reminds me of the easy-to-connect-with, sad-sack characters of Woody Allen. Lindsay (Tami Sagher) has wealthy parents. She takes pot as well as unemployment compensation which make Miles rage with jealousy. But, Lindsay is seeing a therapist unable to cope with her failure (professional & personal). Jack (Keegan-Michael Key) is the scene-stealer of the group with a big ambition to achieve stardom. Samantha (Gillian Jacobs) seems to be the most talented member of the group. But, unlike her boyfriend Jack, she’s comfortable to keep on performing with friends in some little corner of the city. Jack does his usual showboating in one of the shows and gets a spot on “Weekend Live”. His success and new fame make other members of the group rethink their ability to succeed. The pursuit of climbing up the career threatens to undo ‘The Commune’, staying true to Mike’s aforementioned observation about ‘art’ and ‘life’. Adding to their woes, the group’s small performance space is about to be transformed into a condo. 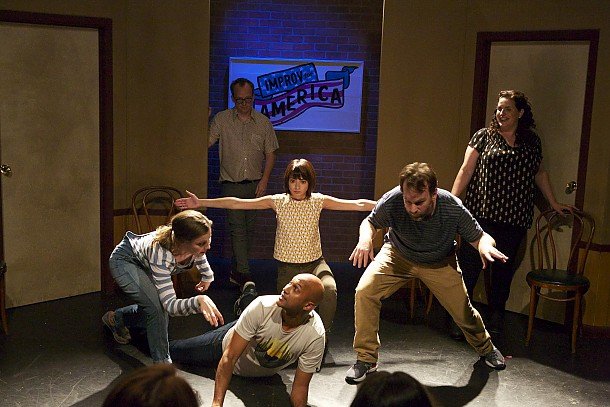 The rifts, envy and the eventual separation between the group members follow a predictable trajectory. But there’s a touchingly naturalistic feel to the proceedings that everything looks refreshing. There’s something so realistic in the way Mike depicts the combination of jealousy and joy, one feels for a friend excelling in the same form you too are passionate about. The mixture of these contradictory emotions is smartly used by the director without escalating it to insipid dramatic levels. And, Mike isn’t just concentrating only on the perspective of people who feel left out or questions their talent. He contemplates on the guilt and the unbridled pressure faced by that one person who succeeds in the competition. Jack puts up with his friends’ criticism (that he’s ditched them) and demands while doing everything to not get fired from a new job. By exploring the feelings of both sides, Mike is able to ponder over how we perceive success & failure. Except for Samantha, all the four set Jack as their benchmark for success and it slowly turns innocent friendship into a tool to fulfill their personal agenda. When the agendas are turned down, the friendship wanes and the sense of failure looms large.

The conversations are much nuanced and although the characters have an agenda, they don’t come across as scheming personalities. Mike extracts humor from the group’s single obsession to be part of ‘Weekend Live’. The humor rises out of embarrassing situations, like their slew of awkward questions to guest host Ben Stiller, in an effort to make the best impression on him. We don’t just passively laugh during those moments. We can also relate with the truth and pain behind those embarrassing moments. Don’t Think Twice also conveys how hard it is to lead a life as an artist. It is gutsy enough to observe the breaking points of the comic artist, working quotidian day-time jobs. I also liked how these people improvise their comedy by exploiting tragic situations. In one scene, the audience expresses their disapproval over the absence of star performer, Jack, hurting the feelings of other present members. They all come together to turn it into a beautiful comedy. The most unforgettable tragicomic scene comes towards the end when Samantha plays the joyous girl ‘stranded inside a well’.  From a visual standpoint, Mike treats the film as his love-letter or tribute to improv comedy. I was fascinated by how Mike Birbiglia has shot the marvelously performed improv scenes. His camera keeps drifting around the small stage, subtly brooding on the inner feelings of the on-stage actors. If he had just those scenes from the vantage point of an audience, we would have laughed the same, but I don’t know if we would have felt an intimacy with the characters. The director also makes perfect use of silence and elegantly breaks it with a billowing comedy (for example, in the funeral scene).

Eventually, the rules of improv comedy looks like the rules to lead a satisfying life. The on-stage improvisational skits become a metaphor for our lives. Saying yes to new opportunities, staying together with a like-minded group and not overthinking may do save us from spiraling down the vortex of damaging thoughts. In a way, movies, like Don’t Think Twice, are the gentle, big brother some of us never had. It doesn’t plainly state that it’s okay to fail. I think this cathartic movie experience is all about gracefully admitting that life’s unfair; it is about understanding that ‘not only you, your dream & idea of success too evolves over time’. Most importantly, Mike Birbiglia guides us to get rid of the short-sighted view of success (that success = popularity or visibility). There’s not a single flaw to point out in the performances. Gillian Jacobs is my most favorite actor among the bunch. She (and the actress who played Allison) doesn’t come from improv/stand-up comedian background, but she anchors the narrative with truthful emotions and perfectly conveys the different attributes of improv.

Don’t Think Twice (93 minutes) is one of the best bittersweet drama to look at the creative and personal lives of professional comedians. Despite the modest narrative structure, its well-grounded characters and truthful emotions offer a totally engrossing movie experience. It’s a feel-good movie which doesn’t shy away from showcasing the messy parts of modern life.