Home»Reviews»Film Festivals»How it Ends [2021]: ‘SXSW’ Review – An Exuberant Comedy About the End of the World
Film Festivals/Reviews/SXSW

It’s the last day of everyone on the earth. The meteor is going to strike anytime soon. Liz, anyway, is going to die alone, believing her companionship with her younger self to be more metaphysical than literal. However, she determines to hit the road down LA and get done with all her regrets- and ultimately liberate herself before succumbing to the phenomenon like everyone else. That’s all that Zoe Lister-Jones’ How it Ends (2021) represents. However, the lightness of touch and humor in treatment makes for delicious entertainment and helps us embrace the delights of the film’s broad brush strokes in storytelling.

SIMILAR TO HOW IT ENDS (2021): ENDS: SUBVERSIVE, UNCONVENTIONAL, ENDLESS

Life is not the same anymore, at least after 2020. The grip fastened to our breath has loosened a bit. The world, as we know it, is gradually coming to an end. That Zoe Lister-Jones imagines a more simplistic apocalypse doesn’t feel imaginative. Not anymore. Rather, it feels timely and fitting that she destroys the world as the film comes to an end. Even the mixed response to How it Ends feels calculative of the forced optimism we have been force-fed by the light, comedic cinema. The film’s laid back approach is not relaxed: it’s more eclectic and electrifying than it initially lets on. 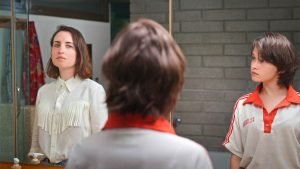 How it Ends’s lack of nuance and subtlety has been more than made up for by its confident storytelling and creative absurdity: there’s an energy that the film maintains from start to finish, never letting go of the audience’s attention. There’s a growing enthusiasm that crept up on me as Liza and her younger self were chased by the mysterious person who was creepily following on the ladies. You know that this, too, shall reach a predictable, ridiculous conclusion, yet you stay watching because ultimately, the film is a masterclass in quirky storytelling. This ‘quirkiness’ is fantastic because the delivery is awesome. The message of self-love comes across as sincere and sweet.

How it Ends was shot in the initial days when movie shootings were allowed to proceed with safety measures, the ‘COVID-comedy’ genre abundantly shows in the film. The social distancing between the characters is apparent through the various sequences. Also, the way the film denies an intimate scene makes you smile for the way Zoe imagines with all the pandemic restrictions. This helps because the film is a solid example of how the fluidity of art can’t be regulated by the plunder wreaked by a deadly phenomenon.

There’s also a lovely Pixar-like essence to How it Ends. The concept of a woman hitting the road with her younger self while constantly looking beautiful, reminded me of the conscience of a teenager in Inside Out. Embracing one’s death while clinging to playfulness was similar to Soul. Yet, the inventive ways of coming up with a simple conversation as a solution to the burdens which people keep on their back hit right in the feels because it’s enigmatically original. I especially enjoyed the confrontation between Liz with her mother and the one with her once-best friend. Olivia Wilde kills it in her brief cameo appearance.

The performances are beautiful in How it Ends. One must be appreciative of the excellent Zoe Lister-Jones as Liz in the film- I loved how confidently and convincingly she plays out even the most straightforward scenes of Liz, ultimately elevating them. The young Cailee Spaeny is exceptionally low-key as the teenager Liz- her wickedly charming sense of humour combines with her crackling delivery of dialogue. Both of the actresses share adorable and rich chemistry, without one dull moment in hand.

How it Ends does have flaws: the film needed to cut down on silliness in the middle act. Also, there are some pointless scenes in the film which attempt to move the audience and don’t nearly succeed in doing so.

However, it cannot be denied that this is a pleasant and exuberant comedy. It’s an honest attempt at reflective filmmaking, and a must-see.