Home»Reviews»Films This Week»Freeland [2021] Review: Krisha Fairchild carries this film about the effects of capitalism
Films This Week/Reviews/VOD

Freeland [2021] Review: Krisha Fairchild carries this film about the effects of capitalism

Legitimization. While that drives things and makes them more accessible and commercial, it drives certain sections out of what was the only thing they knew. It even changes the essence of what something is. Cinephiles may identify with the latter point, as this as the first season of any show differs from the second season following a takeover by a major distributor. The scale does increase, but the charm and simplicity drop to such an extent. That, of course, is different in the sense that the brains are retained. But in the case of the subject of Freeland, life forces the central characters to accept a sudden/inevitable change as they are driven out. A change makes what’s illegal, even more illegal, as there are legal options for the customers. Options that, if obtained from the illegal route, could result in severe losses for the legal routes.

What makes this universal is the theme of having to survive amidst transitions as one age, or rather, moves into a different phase of life.

Freeland, while touching upon the effects of capitalization, brings to life the story of an old pot farmer named Devi. It presents the journey of how she must deal with the dwindling business due to the legalization of the substance. Capitalization could spell their doom and they know it. When it rains, it pours. Akin to the poster, she is literally up to her neck in water and she stares up at the sky in hope and despair.

We get a glimpse of the bond she has with her co-workers and see that it is a community that relies on a sense of understanding and fellowship. However, all that changes with a legal notice. She loses her clients, and with the commercialization, she even could lose her colleagues. It is a glimpse at how the feeling of community is held together by the adhesive known as money. 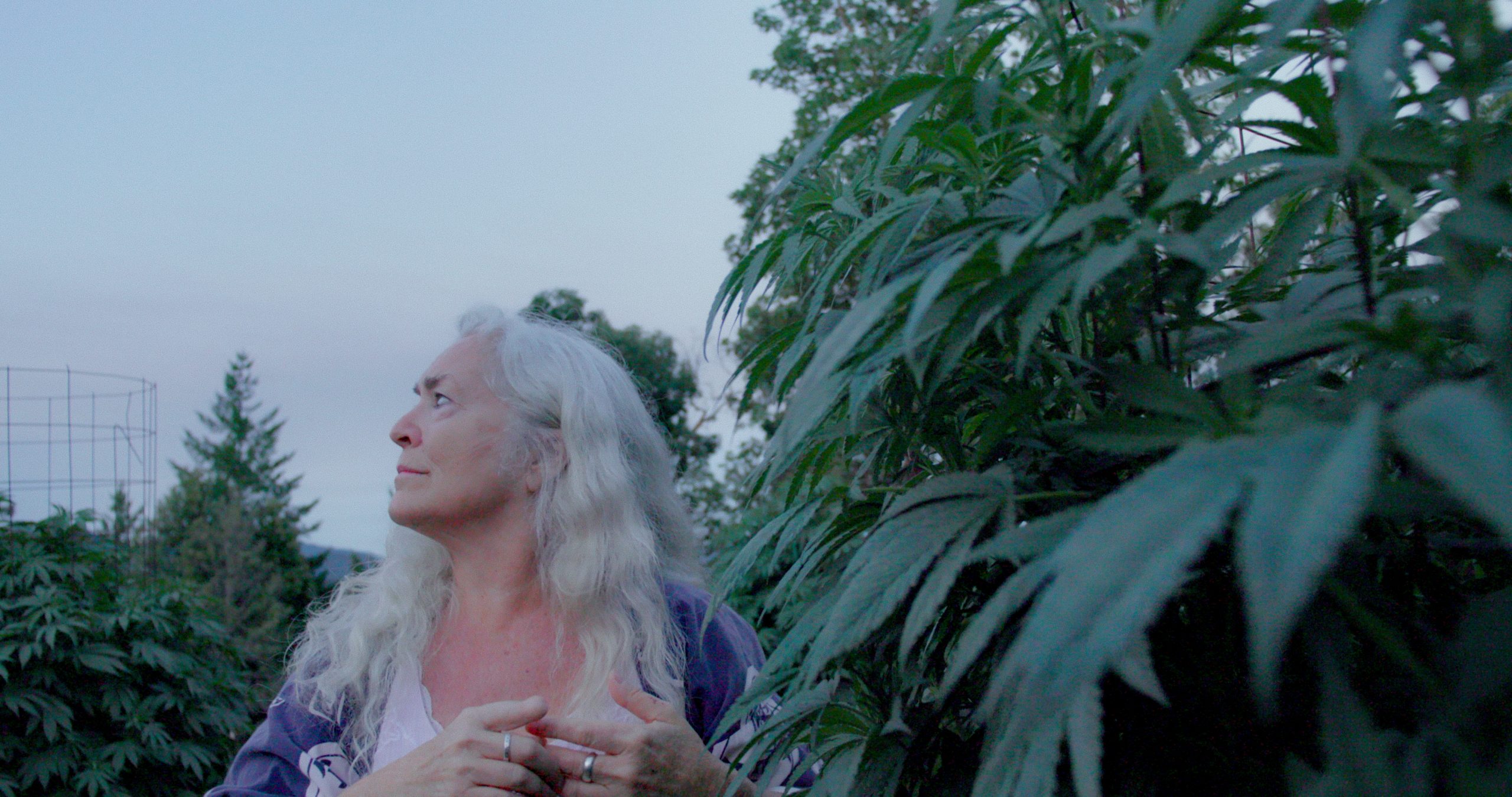 While the dialogues aren’t really powerful or even memorable, they get elevated with Fairchild’s expressions and her demeanor. Freeland focuses primarily on the lead character’s expressions as realization dawns upon her. Krisha Fairchild is wide-eyed, shocked, and stunned as she realizes that 30+ years in the business are useless. The understanding of her situation drives her to the path of insanity that even provokes her most loyal colleagues to part ways.

Even when she tries to go the legal route, she sees that it is not meant for her and she is in a way beyond her depth amidst the technology. At this point, I even got the impression that her head was spinning.

As we see all this, we feel as though we are part of the rural off-the-grid community in Humboldt, as the camera makes us feel that we are part of the scene. This begins right from the start where they are selecting leaves. We get a glimpse of the leads partially hidden by the trees. Even over-the-shoulder shots of interactions are partially cut and could lead to one being accused of not framing it well.

This is largely down to the director duo of Mario Furloni and Kate McLean. When one learns about the director duo’s past work, we get the sense that they went for the documentary feel for this feature. While this subject can solely be a documentary feature or an exclusive feature film, it’s quite refreshing to see it in a feature film with a documentary-esque feel retained. It makes it as real as possible, especially in scenes where one would say the lighting is really poor, but wouldn’t you expect that sort of lighting in the remote location? The scenes at night, too, seem to have been shot with just the moonlight illuminating the way and the firelight providing additional illumination.

The use of real locations in real-life settings lends authenticity and allows the characters the chance to live their roles and use reactions to help their acting performances. Besides placing the audience right there next to the characters, they let them experience the exact same things as well.

Marlo Furloni’s lens helps the audience experience Freeland and immerse themselves in a journey of the inevitable. It sheds light on the imminent change and how loyalty is a myth with and in the end all you have is yourself. Watch this only for Krisha Fairchild.

Freeland [2021] Review: Krisha Fairchild carries this film about the effects of capitalism