Johnny’s directorial efficiency is evident in the way he passes off the sense of claustrophobia while observing the crowded, airless city. He doesn’t see the protagonist's suffering as an isolated incident of institutional indifference. Advisedly, Johnny’s gaze often falls upon the city’s residents, treating each other with contempt, fear, and false respect. The suffocating sense of apathy is found deeply and extensively in the society

Shanghai-born and Vancouver-based film-maker Johnny Ma’s stark social realist drama/thriller Old Stone (2016) is a disturbing illustration of the sardonic saying: “No good deed goes unpunished”. Set in the proto-capitalist China, the movie acutely observes one humanist taxi driver’s losing battle against the bureaucratic indifference and grim economic reality. Johnny Ma retains the fury of Ken Loach minus his irresistibly funny interludes. Ma’s grievous queries regarding an unempathetic society also reminded me of the cataclysmic but perfectly understandable tales of lesser-known film-makers like Lou Ye (Suzhou River, Mystery), Rodrigo Pla (The Zone, Monster with Thousand Heads), Kristina-Petar (The Lesson, Glory), and Brilliante Mendoza (Kinatay, Ma’ Rosa).  The title refers to the protagonist Lao Shi (Chen Gang), a man too honest and compassionate; a word that considers one’s virtues as a sign of his/her naivety in the relentlessly harsh world. 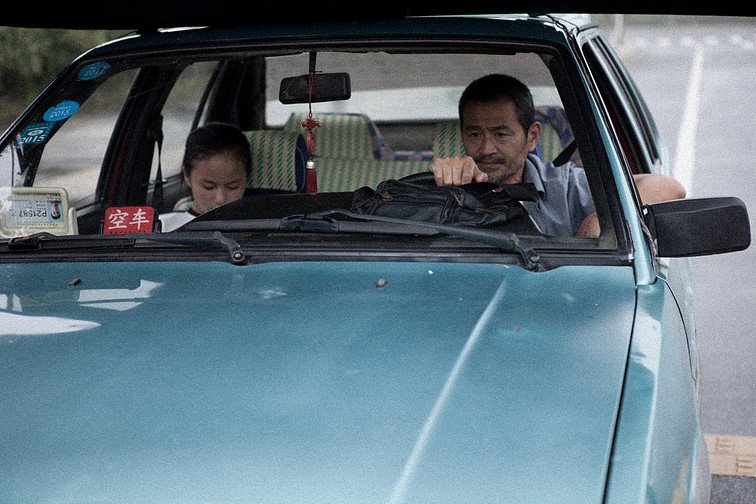 The movie opens with the shot of a keen-eyed Chinese cabbie in the driver’s seat, smoke curling around his face, indicating the narrative’s noirish roots (this belongs to the category of ‘bureaucratic noir’ in the vein of remarkably naturalistic Romanian New Wave cinema). The title showcased on captivating red-color backdrop foreshadows the raw and unflinching violence (emotional and physical). Writer/director Johnny Ma establishes his major plot points few minutes into the narrative. Lao Shi, the worn-out middle-aged taxi driver, follows a motorist with a bandaged head. Shi barely listens to the accident news in the radio, which says about a pedestrian getting hit by a car the night before. In order to escape from the twisted Chinese law on victim compensation, the driver has backed up the car and finished off the pedestrian (this was taken from various gruesome real-life incidents; in one instance a driver who accidentally hit a nine year old girl then intentionally killed her to avoid high compensation bill. The high cost of recompensing an injured but alive victim has resulted in many hit-to-kill cases). Trapped in a similar situation, few months back, Shi has done the right thing.

Distracted by an inebriated passenger, Shi hits a motorcyclist Li Jiang (Zebin Zhang), causing a head injury. We never see the accident (only the sight of Li lying on the road), but Shi’s concern for injured man seems genuine enough that we believe what he says. Shi then makes the first mistake: without waiting for the ambulance, he decides to cut through the bureaucratic muck by taking the injured man to hospital in his own car. The doctor appreciates Shi for bringing the man soon. But the price for the good deed is indeed very costly. He pays for Li’s surgery and despite the good intentions, the doctor couldn’t stop Li from falling into a coma. The taxi and the insurance company refuse to pay the man’s hospital bill because the protocol hasn’t been followed. The disdainful police officer is very slow in filing the accident report, which actually may smooth out Shi’s conflict with the insurance company.

The obstinate righteousness of Lao Shi makes him to hide the accident and burgeoning hospital bills from his wife (Nai An). She runs a small daycare and her worries are limited to paying bills and fees to their daughter’s classes. Soon, Shi contacts Li Jiang’s wife, but her lament only ratchets up his guilt. He continues to be selfless and keeps on poring money over the cavernous mouth of Chinese healthcare. When Shi’s wife learns about her husband’s secret, she rages and takes him to a pro-bono lawyer for advice. The lawyer, like many of Shi’s acquaintances, feels it would have been better if the victim is dead. Ironically, the only peaceful moments now left in Shi’s life is the time he shares in the hospital room with the comatose accident-victim. As his family threatens to disintegrate and bills pile up, Shi hopes to contact the drunk passenger (the man has left his iPhone in the taxi) who actually was the cause of this accident. But more humiliation follows. At one point, even the victim’s wife confesses that it would’ve been better off if her husband was dead. Right then Shi’s humanity dissipates once and for all. 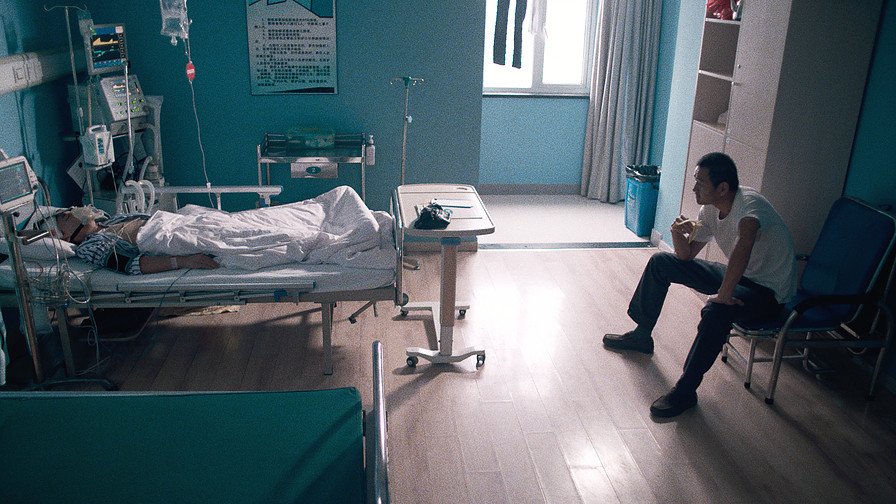 Johnny Ma bookends every step of Lao Shi’s downward spiral by cutting to shots of wind-blown, rain-wracked forest trees with a weighty musical score in the background. The image of invisible force aggressively swaying the trees is oft juxtaposed with Shi’s gradual unraveling in the hands of the imperceptible law which condemns compassionate behavior. Johnny’s directorial efficiency is evident in the way he passes off the sense of claustrophobia while observing the crowded, airless city. He doesn’t see Lao Shi’s suffering as an isolated incident of institutional indifference. Advisedly, Johnny’s gaze often falls upon the city’s residents, treating each other with contempt, fear, and false respect. The suffocating sense of apathy is found deeply and extensively in the society. I especially liked the skillfulness with which Johnny stages the ‘wedding scene’. The joyous mood in the sequence only escalates feelings of disorientation and fury. The use of piercing sounds in the foreground further adds to the narrative’s frantic tones. From the simple drilling equipment used in the pavement to the humming noise of cash-machine to the patter of rain drops, every little sound seems to forebode the approaching disaster.

What’s intriguing about Johnny’s movie is his attempt to showcase how a good soul could be driven to commit a violent act by the impersonal system. This particular aspect, however, is staged in a tad forceful, heavy-handed manner. The final supposedly thrilling segment happens to be less satisfying than the initial neo-realist tone which infused within the anxieties of an honest man. The end portions, however, overtly push the point it has already made (Shi is literally dragged into the muck). Nevertheless, that final devastating shot retains enough power to send a chill down our spine. Besides, even before the unsubtle last segment, Johnny Ma strongly proves himself as a remarkably mature storyteller. The performances are robust throughout, particularly from Chen Gang, who starts off as the archetype of good guy. Chen effortlessly carries exhibits the characters’ burden and guilt through furrowed brows and hunched shoulders. It’s the kind of measured performance that passes off his emotions of helplessness and anger without any pointed dialogues.

Old Stone (81 minutes) is a riveting social drama about the perils of doing good deeds in a society where the legal system is directly at odds with the basic humanity.