Disclaimer: I have not seen the 1970’s Clint Eastwood film or read the book, this was my first exposure to the story.

The civil war rages on. An injured mercenary finds himself deep in enemy territory. A young girl passes by, and accompanies him back to her all Christian women safe house to heal. As he heals, he has interactions of different sorts and varieties with the women there, all incredibly aware of his lingering presence, which adds flavor and variety to their mundane lives and routine. Hormones ignite and sexual tension brews.

Sofia Coppola masterfully creates a moody and atmospheric world that sucks you in. Dimly lit interiors and wonderfully crafted sets where not even a candle seems out of place contribute to the realizing of this setting and time period. 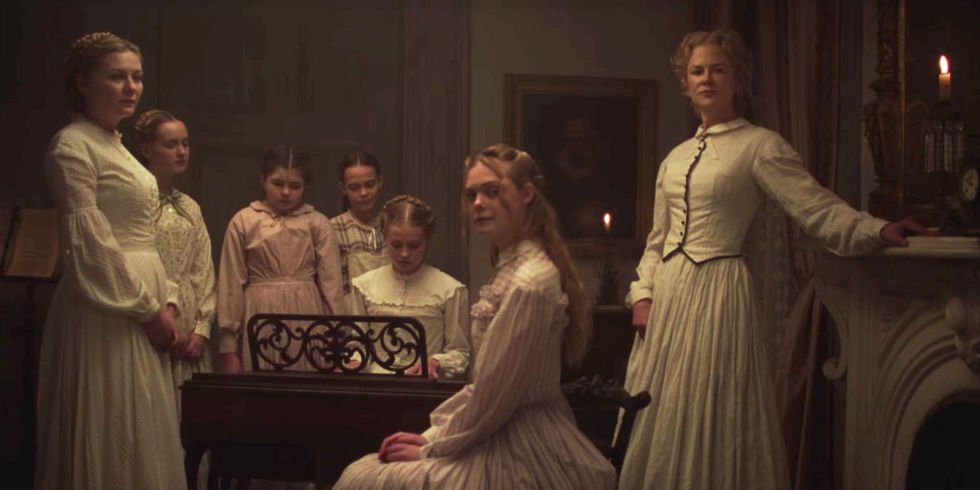 The writing is sharp, and consistently believable. It helps that characters are brought to life by able actors. Farrell, as the injured corporal is constantly charming and unpredictable. Just like with the women, he can trick the viewer into falling for him one moment and surprising you the very next. He brings a full range of emotions to the table and is a true delight. Nicole Kidman continues her hot streak as the leader of the women at the safe house with pitch perfect dialog delivery helped by eyes and expressions that convey all they need to at various points. Kirsten Dunst does what she can with an underwritten character but the true surprise is Elle Fanning, who brings new meaning to the phrase “less is more” delivering her few lines with such tenacity that you remember them after the credits roll.

To accentuate the constant undercurrent of tension building throughout the first two acts of The Beguiled, Sofia Coppola makes some bold creative choices. One that stood out to me was the absolute minimal use of background music. Instead of subtle tunes to accompany dialog and be suggestive of what the viewer should feel, Coppola choses the natural sound of nature, ranging from the innocent chirping of birds to the noise of bombs being dropped and war raging somewhere very far off. This is done to further draw the viewer in, break the illusion of the film and make you feel like you’re trapped in this house, with these characters and have the privilege of seeing it all being played out without being harmed by it.

Despite being a character driven drama, we unfortunately never learn enough about these characters to be fully invested in the emotional stakes once they are raised and conflict arises. There are passing mentions of some backstory but neither of girls is fully fleshed out, beyond what their actions during the course of the film suggest. While the slow, steady and ‘tension boiling at the surface but never erupting’ approach works great, the climax and resolution seem to be a bit too convenient and rushed. There are a few instances of character actions inconsistent with what’s been previously established, leaving motivation for said actions unclear and muddy.

The Beguiled has its flaws, but on the overall, is a handsomely crafted, well-acted and engaging watch that’ll keep you guessing and intrigued, masterfully draw you into its world and leave you feeling satisfied. Had the characters been better fleshed out, the third act not rushed and but more finely plotted, this would have been among my favorite of the year so far. Instead, it’ll settle for another very good effort from Sofia Coppola, and as always, leave us looking forward to what she does next.

I love movies. All genres, all languages. There is no feeling as great as the feverish anticipation of a long awaited film on opening night as the lights dim. Cinema is transformative, universal, eternal and I am forever a believer.