Bingo Hell [2021] Review: An Unnecessary and Shambolic Horror film About Gentrification and Consumerism

Gigi Saul Guerrero’s latest Amazon release is a drab affair that promises plentiful but delivers very little. Despite featuring a very intriguing premise that Guerrero tries to use to springboard a broader message about society’s macabre truth, ‘Bingo Hell’ never manages to quite build on it.

Set in the small town of Oak Springs, the film focuses on a small community of aging people led by a fierce Lupita. The group resists gentrification of the neighborhood, staying back when others sold off their properties and moved on. One of the favorite places for them to meet and socialize, the Bingo Hall, is turned overnight into an LA-like spectacle of light shows, glowing banners, and enticing appeal, and coined ‘Mr. Big’s Bingo’.

Related to Bingo Hell – Black as Night [2021] Review: The second installment in Welcome to the Blumhouse is a big vampirish disappointment

The new owner (Richard Brake) drives a flashy car and offers multifold on the prize to win Bingo offered by the old establishment. He also stamps the players who indulge with a grimy dollar sign – the sign of the owner’s sinister intentions. The opening scene of the film sees Mario, the trustee of the old place, die by manically eat Bingo balls and sporting the same sign. Bad things start to happen to people who win the Bingo game, urging Lupita to take matters into her own hands. 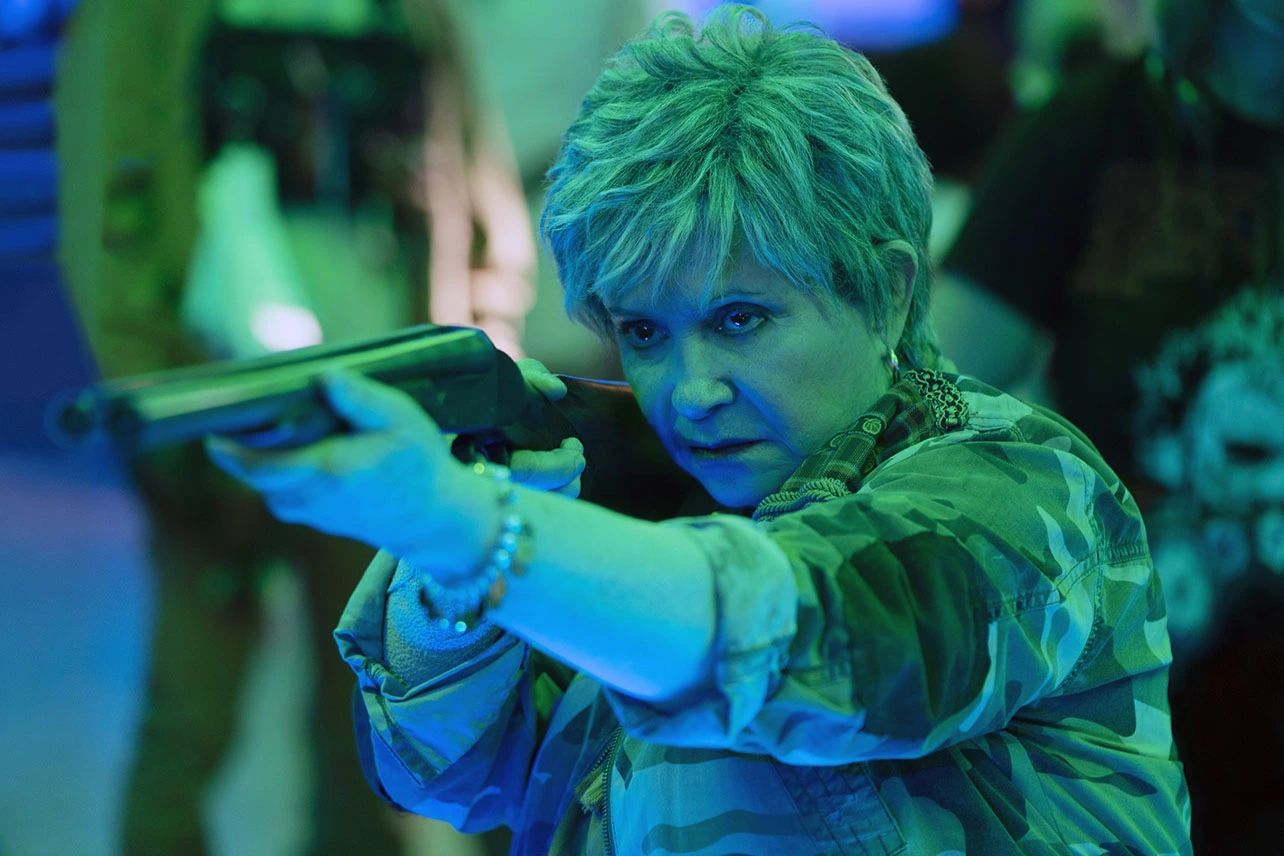 ‘Bingo Hell’ marks her first full feature debut as a director, having previously directed segments in ‘Mexico Barbaro’ and ‘ABCs of Death 2.5’. Guerrero’s work prior has been labeled as the “new voice of Latina representation”. She has received acclaim for her style of filmmaking and for also advancing strong female characters on screen.

Adriana Barazza stars as Lupita, fulfilling this particular archetype. Her character says an interesting line at the end of the film. “All my life I thought it was this neighborhood that made us whole: but now I have realized that this community can survive anywhere”. That, along with the modern-age lust of materialism broadly forms the thematic crux of the story. But there is little to no effort in trying to come to this realization. It is almost as if Lupita falls upon this idea without having gone through the requisite experience. In technical terms, that is to say, that the second act is bereft of purpose. It does not do a good job of setting up the finale. This problem, though, is more perverse and stretched than this isolated incident.

Casual-like writing, which has become a raging epidemic with new films, is the biggest letdown. The dialogue has no teeth and is written almost as if to obligatorily reach the finish line. The scenes have no rhythm of their own, as a result. It is difficult to gauge what to look for in many places. Bad writing does not necessarily translate into bad acting but in this case, it does. The actors hardly emote, barring the exception of Barraza and Caldwell (Dolores), probably because of poor direction. But also due to a lack of structured writing that respects the real in theatrical. Because Guerror’s script runs delirious, so does her narrative arc. It is uncharacteristic of such a prodigal talent but it is what it is. The movie just goes all over the place. It is like a bad dream that you want to get over with as soon as you can.

Admittedly, her discussion on greedy corporatism and consumerism is extremely weak. I did not find any subtlety to her message, nor any effort to use her craft to articulate it. Using dollar signs and what ends up looking more circus, child-like shenanigans than ominous hardly looks a good choice. ‘Bingo Hell’ might have been a popular film in the early 2000s but today, it is just plain disappointment. I watched on with the hope of spotting any redeeming aspect that I might take away from it. Barraza’s performance? Ordinary. Richard Brake? All he does is grin and massage people’s shoulders from the back without telling them. A latent message about gentrification? No. ‘The Last Black Man in San Franciso’ explored the subject beautifully. The short runtime? Maybe yes. ‘Bingo Hell’ never quite catches on with what it wants from itself. It starts from a confused and lazy script and ends up a shambolic product. This is definitely a movie that you can skip.

Bingo Hell [2021] Review: An Unnecessary and Shambolic Horror film About Gentrification and Consumerism