At its onset, Tamil horror film Lift (2021), starring actor Kavin, streaming on Disney+ Hotstar, has a premise that is intriguing, to say the least. As its suggestive name indicates, the film is centered on a haunted lift or an elevator as in American English parlance. However, Lift, the film completely botches the premise and becomes something unwanted, like Frankenstein’s monster; and the only ghost that you would find is the ghost of an interesting idea.

Kavin plays Guru, an apparently suave and dynamic IT professional, who has been hired to lead a team of IT engineers. On his very first day at the job, he encounters weird humor from his colleagues, displays downright narcissism, meets a potential hate-turned-love interest, and finally gets trapped inside the office with a vengeful ghost. One might wonder whether, barring the ‘getting trapped with and by a ghost’ part, all of those other events are germane to the theme of the film. The answer would be that they are not.

And the film engages with those ludicrous irrelevant events for a good twenty to twenty-five minutes. As one scene involving two ‘techies’ partaking in a long, elaborate and quite a random conversation about the life of IT professionals in the corporate sector reveals, director Vineeth Varaprasad seems to have an agenda to display while making this film. As we move closer to the climax, we get more and more glimpses of this agenda.

Agenda or a message is welcome while making a film. But that has to be done subtly. Infusing the agenda while respecting the medium of cinema is important. Horror films like Jordan Peele’s Get Out is the perfect example of that, with the way it infuses racism. It is not prudent to throw the message on the audience’s face in a long conversation filled with stock jokes, or in the overblown denouement of the film spanning a good fifteen to twenty minutes. 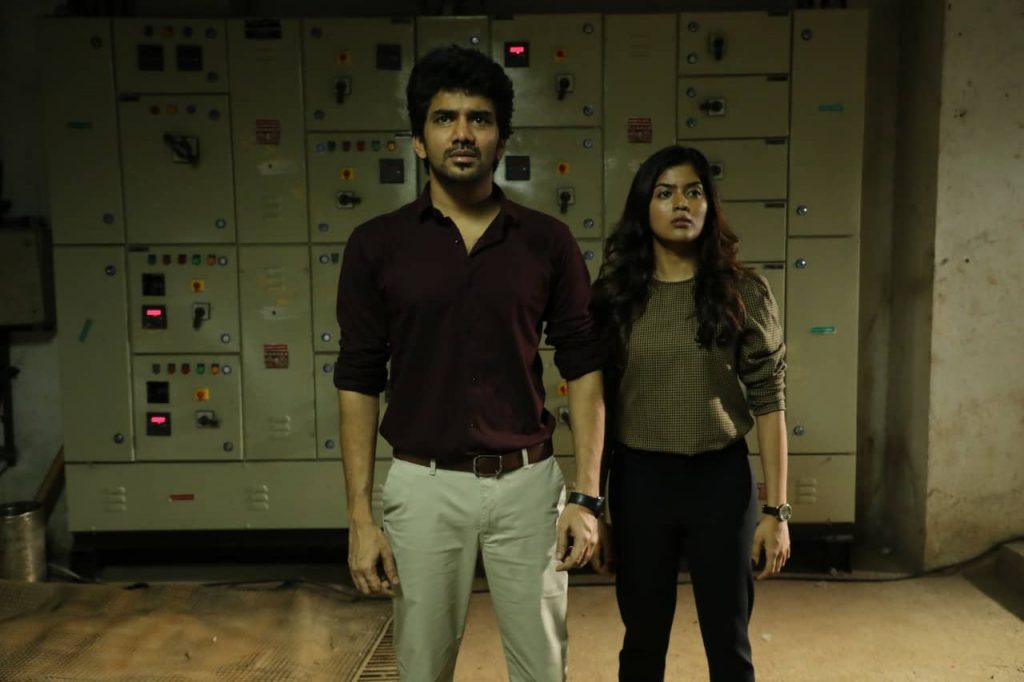 It is also not prudent to spend precious screen time on dilly-dallying on forced romances, especially when the story of the film does not demand it. Guru and Harani (played by Amritha Aiyer), the HR professional of the same company Guru works in, are logical fallacies on screen. Their ‘love’ seems too fabricated, even by mainstream Indian romance film standards. These characters and their actions would make you feel like that the screenplay is written by a child.

One example would be Harani drawing planchette circles to communicate with the spirit immediately after learning their lives might be in danger in front of the unknown. Unless she is one of the Elrics from Full Metal Alchemist, that kind of action seems baffling. Also, the managers of the corporate sectors are shown as if they were mafioso, and the security persons of the buildings are henchmen to do the dirty work. The film is filled with such baffling twists and turns of events.

Not to mention, the fluctuation of tones in the film. Within seconds, the film shifts from being a horror to romance, then from romance to comedy, then to a warning to IT workers, and then back to horror. The parts that are actually horror in this film, are your usual jump scares. Lift’s horror portions are akin to what one might experience when they visit the usual scary houses of amusement parks and shopping malls.

Kavin and Amritha Aiyer tries to bring some sincerity to their weirdly written characters. Even though Guru and Harini should not even be seen together, Kavin and Amritha do have chemistry, and there are few occasional moments where they make their characters seem passable as a couple, as intended by the film. The cinematography by S Yuva is appreciable. The empty bays and office premises do exude an eeriness and the camera of Yuva captures that well.

However, these laudable efforts go in vain and become pale shadows like the antagonist of the film. As the credit rolls, you might wonder if director Vineeth should have made the conscious choice to take it up a notch and simply commit to becoming a campy horror flick involving a Lift. It would not have become a better film, but might have become more enjoyable.

Black as Night [2021] Review : The second installment in Welcome to the Blumhouse is a big vampirish disappointment