Every once in a while there comes a movie that changes everything. From how you look at a story to how you watch a film and the various emotions we are provoked with. Even before its premiere at the Cannes Film Festival where it won the prestigious Palme D’or, Titane had created a mysterious aura surrounding what it was going to be. One thing was for sure that the audience was in for a unique experience. And the reason behind it was writer-director Julia Ducournau’s last feature Raw. Which not only made the audience faint but gave a refreshing new approach to cannibalism and body horror.

Titane opens with pre-teen Alexia (Adèle Guigue) annoying the wits out of her father (Bertrand Bonello) to the point where he decides to crash the car as a form of punishment. The next image is of Alexia with a titanium plate fitted in her skull from the injury suffered in the accident. Years later, Alexia (Agathe Rousselle), now an adult, wears a large scar on the side of her head. And works as a showgirl at a motor show with prying male eyes who gaze at both the cars and girls, though they can only fantasize but never touch the goods.

The environment surrounding Alexia is a world we all are familiar with. In which we are molded on the view of what others want us to be. Alexia is idolized and sexualized, as Ducournau plays the tropes like a magician’s assistant only to later reveal who Alexia is. As she stabs a creepy male fan who forces onto her after the show with a large hairpin which she always keeps close to her. What happens next is where the comparisons to David Cronenberg’s work, especially Crash comes to mind. But, Ducournau takes it to the next level, breeding to a new chapter that is uniquely bizarre, riveting, and at the same time the sweetest story about love and found family. 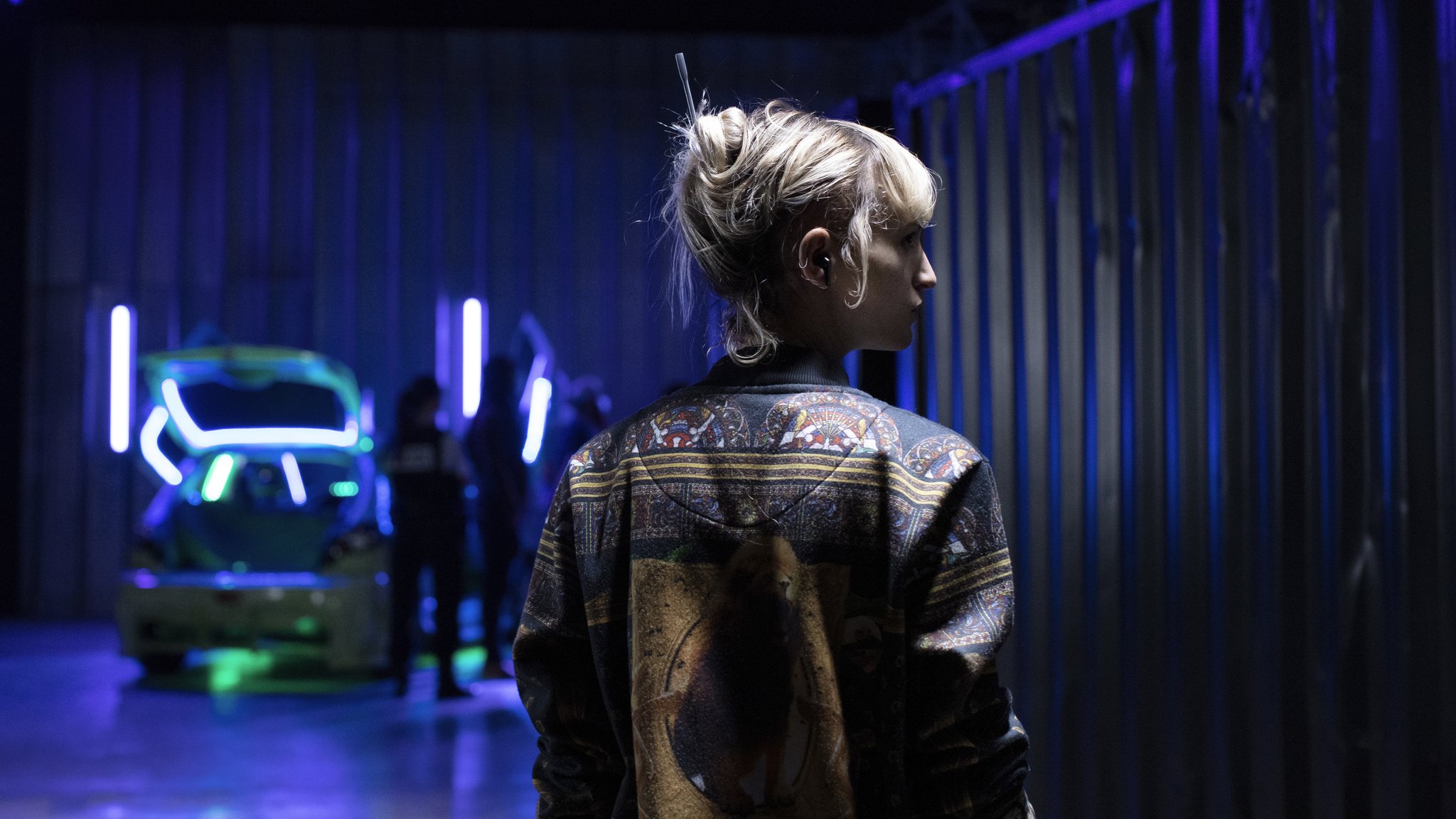 We have all been told a parent’s love is unconditional and that they would do anything for their child. But often the condition is different. Especially for Alexia, whose relationship with her parents, especially her father, is distant and cold. And when an opportunity presents itself where Alexia finds herself in a situation of no return, she runs away and decides to alter her whole appearance. By breaking her nose, cutting her hair, and binding her chest area to pass as Adrien, son of Vincent (Vincent Lindon), a firefighter, who went missing ten years ago.

Vincent is a grieving soul whose life is consumed by his son’s disappearance. He injects himself with steroid shots to appear as a god to his firefighter unit. The relationship between Vincent and Adrien/Alexia is the soul of the story. It is a fascinatingly tender bond between two emotionally closed and broken people who are starving for love. While it takes some time for Alexia to trust Vincent as a parental figure given her relationship with her father, once that happens, she realizes the importance of being cared for and what the unconditional love of a parent truly means. Vincent makes Adrien/Alexia part of his firemen crew he captains and promises that if anyone tries to hurt him, he will kill that person even if that person is him.

One of the sequences that juxtapose the discussion of gender norms is when Adrien is asked to dance by the firemen crew. After some hesitancy, Adrien performs the routine Alexia did for the motor show. Here the macho firemen crew get disgusted by the provocative moves performed by the man they know but if they were to realize it is Alexia who was performing, the expressions and mannerism would suddenly change into voyeuristic eyes, thirsting to touch the flesh. One thing to note is that Alexia barely has any lines throughout the movie. It is through her mannerism we start to peel layers of her wants and needs.

Docuranau teams up with her Raw cinematographer Ruben Impens to create fluid imagery that plays with both metal and fire. The frames of Titane are neither dark nor highly stylized. They are played through the shadows with lots of colors and textures that reinvent the skin itself. Jim Williams’ score is blended with sounds of metals and guitars following the character’s transformative journey. 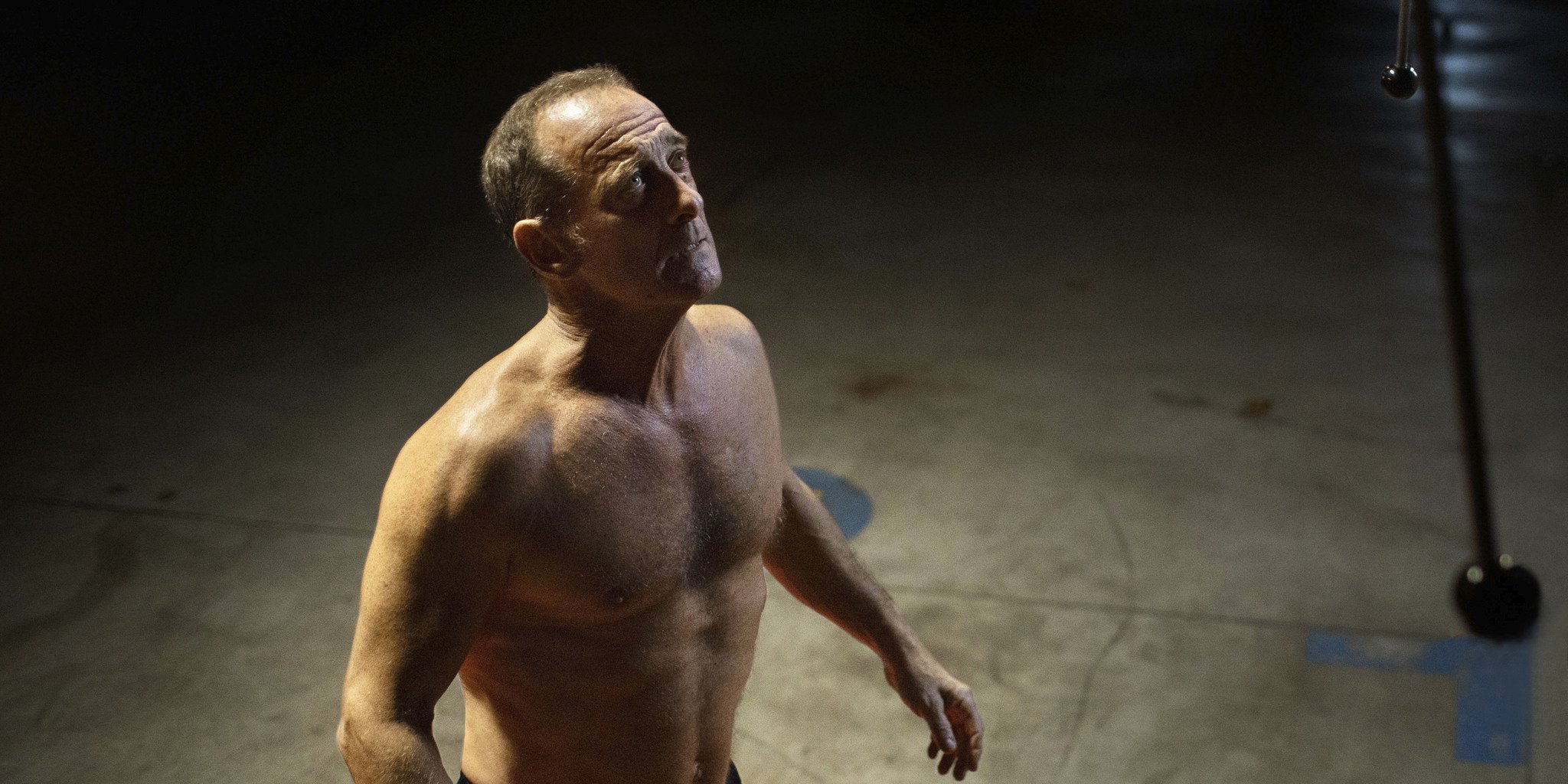 Rousselle leads Titane with her commanding presence on screen as Alexia and Adrien. The way she embodies the transformation of her character’s journey is fascinating to witness. It is one of those performances that stays with you. With barely any spoken words, it is through Rousselle’s body language and fascinating expressions we see Alexia’s journey from an impulsive animal to a vulnerable human that becomes sacred.

Co-leading Titane is Lindon who plays an emotionally and physically drained father Vincent. His presence on screen feels like a man who is ready to smash everyone that has wronged him. Physically Lindon looks astonishingly monstrous but his character is more than that. He plays Vincent to his most vulnerable and humane state. He has to put his guard down to make Adrien feel safe and most importantly to trust him. But he is not coddling, rather he is making sure Adrien knows that he won’t leave him ever again. The scene of him teaching Adrien how to CPR with the tune of Macarena is one of the sweetest moments in the movie.

Titane is a transformative ride that challenges you to think while leaving you speechless. Ducournau is a master of her craft. She knows how to play her audience with a story that starts with horrific violence, only to leave you with an emotional experience that stamps on your mind, body, and soul forever. Ducournau explores various themes concerning sexuality, body horror, rebirth, gender norms, and violence. At heart she wants us to leave with love. Even in Raw, with everything that happened, the most important part of the story was the love between the sisters. In Titane, the subject of love is explored through the most important relationships of all between a parent and child. And how sometimes a found family makes you whole.

Slowly and steadily Titane simmers down leaving an aftertaste that you want to come back for again. It has you saying bizarre, tender, and sweet in the same sentence. And it is one of the reasons why Titane is one of the best movies ever made.